CAD folks with hefty laptops have long envied the Ultrabooks and MacBooks of fellow travellers. But a new generation of slimline mobile workstations is changing the way you can do CAD and BIM on the go, writes Greg Corke.

The first mobile workstations were 5kg beasts, almost guaranteed to put your back out on work trips.

Weights have now come down, but most 15-inch machines still come in at a hefty 3kg. Bruised shoulders from laptop bags are no longer guaranteed, but you will likely feel the strain at the end of the day.

Until recently, attempts at ultra mobile workstations have meant serious trade-offs in both performance and screen size. When your job relies on detailed architectural or engineering design, running CAD or BIM software on a 14-inch laptop simply will not cut it for some.

Everything changed in 2013 when Dell unveiled the Precision M3800, the first proper ultra portable mobile workstation with a 15.6-inch screen. At 1.88kg in weight and 8mm at its most slender, this MacBook Pro look-alike certainly turned some heads.

Since then HP, Lenovo and MSI have all followed suit, delivering 15-inch machines that are certified and optimised to run 3D CAD and BIM software but also offer the same mobility as a slimline business laptop. Compared to a standard 15-inch mobile workstation, there are some compromises.

On the whole, performance is lower. There is a maximum 16GB of RAM (instead of 32GB), which could be a stumbling block for those with complex Revit models. There is only room for one or two drives (instead or two or three) and you can forget about having a DVD drive.

But they are considerably lighter. Most come in under 2kg and when power adapters are included the savings can be as much as 1.5kg.

There is no standard template for these next generation mobile workstations. Manufacturers blend portability and performance in different ways.

1) Those based on a business-class laptop chassis, so include enterprise features like fingerprint scanner and docking port. Some models are classified as Ultrabooks. With Dual Core Ultra Low Voltage CPUs and low power professional GPUs they prioritise battery life over performance. They are more suited to entry-level CAD and BIM than rendering. They include the HP ZBook 15u and Lenovo ThinkPad W550s.

2) Those based on a 3D gaming laptop chassis where performance is an absolute priority but battery life is more limited and fans are noisier under load. They feature Quad Core CPUs that deliver in CAD and BIM software as well as when rendering. Professional GPUs sit between entry-level and mid-range. They include the Dell Precision M3800, MSI WS60 and HP OMEN Pro.

To assess performance we used a range of 3D CAD applications. Our 3ds Max render test, which can make use of all available CPU cores, illustrates the benefits of having a quad core CPU over one with two cores. While our 3D graphics tests use CAD applications more commonly associated with product design and engineering, rather than architecture, they should give a good idea of the relative 3D performance one might experience in an AEC-focused CAD or BIM application.

It is not CAD but should give a fairly good indication of what to expect under a heavy compute load — though it is important to note that the test uses built-in Intel graphics, rather than the discrete Quadro or FirePro GPUs, which draw more power, so it is not perfect. 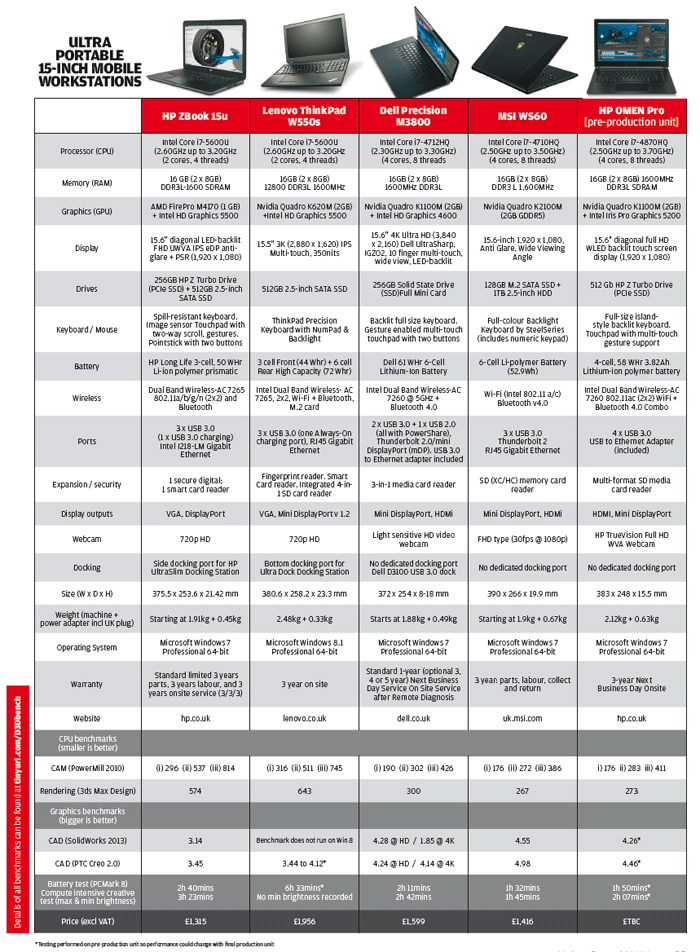 All machines were set to high performance. Display brightness was set at lowest and highest levels and both scores recorded.

Of course, do not take the battery figures as gospel.

If you only use your machine for Word or Excel then the battery will last a whole lot longer.