City scene rendered in V-Ray NEXT for 3ds max

V-Ray has become the industry-standard renderer for architectural design visualisation. The software is primarily used alongside 3ds Max, the tool of choice for arch viz artists, but in recent years it has spread its wings into 3D CAD and BIM with versions for Autodesk Revit, SketchUp and Rhino, as well as other 3D modelling tools.

Chaos Group has now launched a brand-new version, V-Ray NEXT, which will be made available first for 3ds max. It’s a break from the traditional numerical naming conventions, but the company justifies this by saying that the new branding signifies a significant leap forward in terms of both technology and capability. And, as Chaos Group CCO Lon Grohs admits, “V-Ray 4 for 3ds max didn’t sound right.” In other words, the number ‘4’ followed by the word ‘for’ would have been a bit of a mouthful.

The new version is very much focused on performance. “It is about 25% faster just as a baseline. That’s everything – all ray tracing calculations are going to speed up,” says Grohs, adding that this is down to optimised code.

On top of that, the developers have been working on Scene Intelligence, a collective group of technologies that allow V-Ray to ‘learn’ from a scene to help cut render times.

Then there’s a completely new GPU rendering architecture called the multi-kernel, which is based on Nvidia CUDA. “It does parallel processing a lot faster – about two times faster than the previous gen,” says Grohs. More importantly, he believes that its V-Ray GPU renderer (previously called V-Ray RT) is now on par with V-Ray itself in terms of quality. It can be considered properly production-ready.

Scene Intelligence is not unlike machine learning, in that it analyses a scene and then decides the best way to optimise lighting calculations, sampling and so on.

However, it’s not considered to be machine learning in the true sense, as this generally means processing a huge pool of data on a powerful server or cluster in order to ‘learn’ and refine actions based on that learning. “Ours is that on a micro level,” explains Grohs. “We’re learning directly from the scene we’re working with. And we’re using that person’s own machine to do that learning.”

Scene Intelligence is an umbrella term applied to several different technologies inside V-Ray. The first were introduced in V-Ray 3.X and included the Adaptive Lights algorithm, which learns about the scene by analysing the Light Cache data and determining which lights to sample and which to ignore.

“In the previous generation, at each of the windows and openings where you wanted light to come into your interior space, you would add something called a skylight portal,” he explains. “That skylight portal was basically a rectangular area of light that saw out to the environment and tried to optimise the light or bring more rays in through that opening.

Chaos Group is also using Scene Intelligence to help make renders as close to ‘point and shoot’ as possible. With V-Ray’s Physical Camera, you can imitate all the effects of an SLR, but historically, you’ve had to properly understand all the camera settings – F-stop, shutter speed, depth of field, lens distortion and so on – as all adjustments were manual.

With the new Automatic Camera Exposure & White Balance controls, V-Ray looks at the entire scene to automatically determine the proper exposure and white balance, just as a modern camera would. However, it can also automatically adjust the ISO value without changing the F-stop or shutter speed, which lets you control depth of field and motion blur separately. 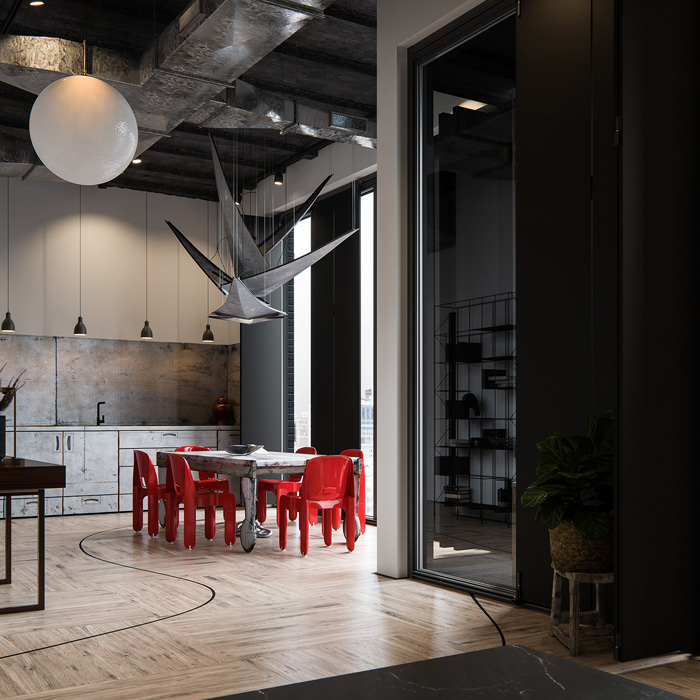 For some years now, V-Ray has supported two renderers: the traditional CPU renderer and V-Ray RT, a so-called ‘real time’ GPU renderer that can also run in hybrid mode on CPUs. For this release, V-Ray RT has been re-named V-Ray GPU to reflect its new standing within the software.

“Speed is the new hallmark here, but also with support for a lot more features that people can use in production,” says Grohs. “We’re seeing some really great stuff done in architecture, big scenes, interior scenes, all done on the GPU and it’s pretty awesome.”

Volumetric effects like smoke, fire and fog have been added to V-Ray GPU. There’s also been a significant update to the UI, not least to remove confusion when rendering. “When you are working in V-Ray GPU, you only have access to the features that are supported by V-Ray GPU.” Previously you were able to select a feature in the V-Ray GPU UI that was only relevant to the CPU renderer and it simply wouldn’t work.

For preview renders, the new release introduces an AI Denoiser, which uses Nvidia’s OptiX technology to denoise the ray tracing. It’s not a production solution; instead, it is designed to give a best guess, very quickly, of what the software thinks the final image might look like.

“If I’m working in my viewport and I’m setting up lighting and shading and materials, instead of it looking like a grainy render, in real time it’s making it look smooth,” explains Grohs. “Now, it does kind of fuzz up some of the details a little bit, but from a workflow standpoint, it does a tremendously good job.”

This is machine learning in the true sense, insofar as it uses data that has been previously learned from thousands of rendered images and not just the rendering it is currently working on, as is the case with Scene Intelligence.

Chaos Group currently uses a set of data from Nvidia that has already been calculated. However, Grohs acknowledges that it could be re-trained with new sets of images. “We do have some ideas about the possibility of looking at our own set of data,” he says.

He admits that, while V-Ray GPU now offers just as good quality as V-Ray, there are still some inherent limitations in GPU rendering in terms of scene size and memory. But these are being addressed, he insists.

“We tried to combat that in the previous (3.x) version. We included automatic mip-mapping, which adjusts your texture resolution and allows your textures to be a lot more memory-efficient,” he explains. “Textures were the thing that took up most of the GPU memory, so that really opened up the floodgates to having a lot more on [the GPU].

“We are working on a solution for ‘out of core’ rendering and that basically means that if you go beyond your GPU memory, we’ll have a way to cycle the data in and out. That’s not in [V-Ray] NEXT yet but it is something we are working on.”

If memory size is still an issue on large scenes, particularly for users who can’t afford two GV100s at £15,000+ a pair, then it’s still possible to fall back on the CPU, as Grohs explains. “If I set up my scene in V-Ray GPU and it turned out that my scene got too big, I can still render that with V-Ray GPU on the CPU, or I can take it all over to my V-Ray renderer and let that render on the CPU as well.” 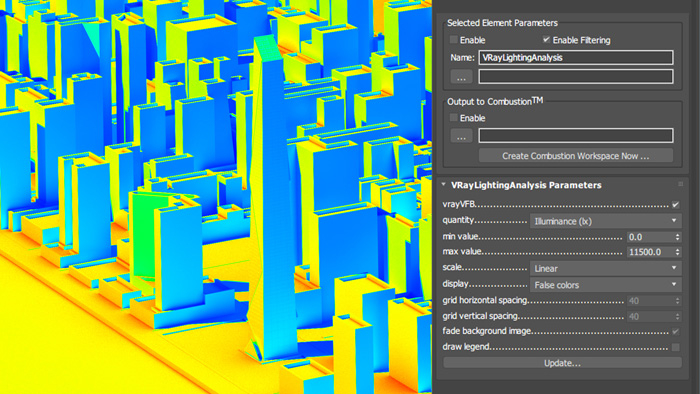 In previous versions of 3ds Max, when mental ray was included in the software, architects and interior designers were able to do lighting analysis using a specialist tool.

Now, that mental ray has been removed from the software and Chaos Group has developed its own lighting analysis tools, which allow designers to both measure and analyse light levels in a scene.

Grohs told AEC Magazine that the new tool is comparative to the mental ray-based technology in terms of accuracy, but maybe has a bit more functionality.

V-Ray NEXT for 3ds Max now includes a much easier way to explore materials as part of the design process. With the new V-Ray Switch Material, multiple materials can be applied to a single object and then selected for output at render time.

“The way to tackle that before would be to set up all those materials and then you just dragged into that object and applied it when you were ready to render,” says Grohs.

“[With Switch Material], I can now apply wood, granite, marble all to the same kitchen counter top, for example, then just check the box that I want when I render the scene.”

This feature can also be used to add random variations or for creating extra passes for compositing.

Getting more from the cloud

One of the challenges that 3ds max users have when it comes to cloud rendering is that the software is Windows-only. It’s possible to render with Windows in the cloud, but as Grohs explains, it can be two to three times more expensive than doing so on Linux.

V-Ray users can get around this by moving the scene into V-Ray standalone, which works with Linux. However, while many elements of the scene move across smoothly, others are incompatible, as Grohs explains: “Some things are out of our control – it depends on what feature set you are using in max and, honestly, what other plug-ins you are using.”

To improve this workflow, Chaos Group has developed a new ‘cloud check’ utility that offers advice on what users might need to change. Previously, if there were any incompatibilities, it just wouldn’t work.

With V-Ray NEXT, Chaos Group is looking to help viz artists accelerate rendering in more intelligent ways, rather than simply throwing more processing power at a problem. Smart algorithms that analyse the current scene and then optimise calculations accordingly mean that hardware can work harder on the things that really matter.

The GPU has also been elevated in status and its highly scalable compute power is starting to be used to full effect. The AI denoiser, for example, has the potential to accelerate preview renders dramatically. And, if users do need more power, they can simply add additional GPUs to workstations, PCIe lanes permitting.

While most of the developments in this new release are under the hood, there are also some great workflow enhancements. The V-Ray Switch Material, for example, looks to be a simple but effective way for architects to explore materials during the design process. We hope this technology is rolled out to Revit, Rhino and SketchUp, where it can be most effective.

V-Ray NEXT for 3ds Max will be out soon. Grohs estimates that the new rendering engine will be available for Rhino, SketchUp, Revit and others by the end of the year.