This stylish workstation has been specifically designed for VR. But despite its slimline chassis, you can still fit an incredible amount of processing power inside for CPU or GPU rendering.

The Magnetar V25 comes in blue or glossy white,

The function of a workstation is always defined by its components, but rarely by the form of its chassis. The Armari Magnetar V25 has been designed from the ground up for Virtual Reality (VR) applications. The slimline Japanese steel chassis is great for taking VR wherever you go – conference rooms, client offices or home – and there’s even a pocket for the HTC Vive link box, that crucial part of the VR headset’s setup that so often gets left on the floor by the side of the machine.

Armari is no stranger to designing its own machines. The Hertfordshire-based company has been working with a custom chassis manufacturer in Taiwan for many years. Technical director and founder Dan Goldsmith sketches out his ideas, then his remote engineering partner brings them life in 3D CAD tool PTC Creo drawing on extensive experience. The design goes through several iterations with markups made on an iPad Pro. It’s a finely tuned process that has been honed over many years.

The time to market is impressive. The Magnetar V25 went from sketch to signoff in only two months with just one prototype. Now the focus is on getting the colour just right.

From the images that accompany this review, you won’t need any clues as to what GPU came with this particular machine. What you might not have guessed is that Armari has packed two AMD Radeon Pro WX 7100 GPUs inside, stacked vertically on a dual-slot riser card that splits the 16 PCIe lanes in two.

The AMD Radeon Pro WX 7100 is a professional, single slot ‘VR Ready’ workstation GPU. In the future, it should be possible to use two of these in tandem to boost performance in some VR applications (one GPU per eye) but, for now, most VR applications put the entire graphics processing load on a single GPU.

The AMD Radeon Pro WX 7100 is really for entry-level VR. It passed the VRMark Orange Room benchmark with flying colours, delivering 142 Frames Per Second (the VR pass mark in this gamesfocused test is 109 FPS). However, what we really wanted to know was how it performed in real world professional VR applications, so we put on our HTC Vive Head Mounted Display (HMD) and entered the virtual world.

The machine delivered a good experience with a variety of Revit models in IrisVR Prospect, one of three architectural VR applications reviewed on page 20.

However, it was not powerful enough to explore our Autodesk LIVE test models flicker-free and was simply not compatible with Enscape.

Moving into hardcore engineering, we imported some large SolidWorks CAD assemblies into Autodesk VRED Professional. Our little blue machine handled a 3.2-million triangle computer model with ease, though it stuttered when we turned on Anti-Aliasing (AA), a technique that smoothes the jagged edges of diagonal lines.

With smaller scenes, it was possible to turn AA to low, even with a 2-million triangle automotive model with realistic paint and materials.

However, with a huge 7-million triangle model, we saw the pure geometry limitations of the GPU as the display flickered every time we moved our head to explore the heavy machinery assembly. We knew the V25 was trying its hardest though, as two small fans on the top of the chassis kicked into cool the active GPU. 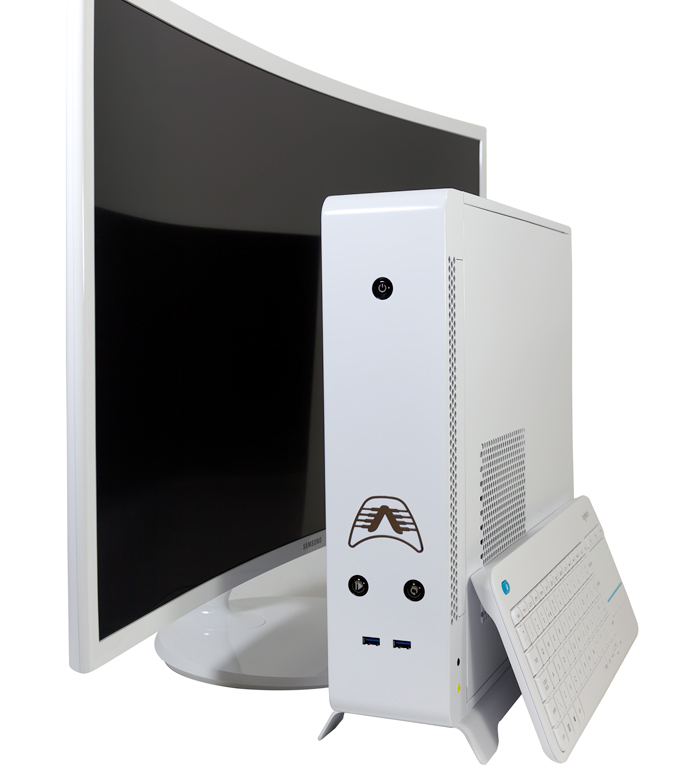 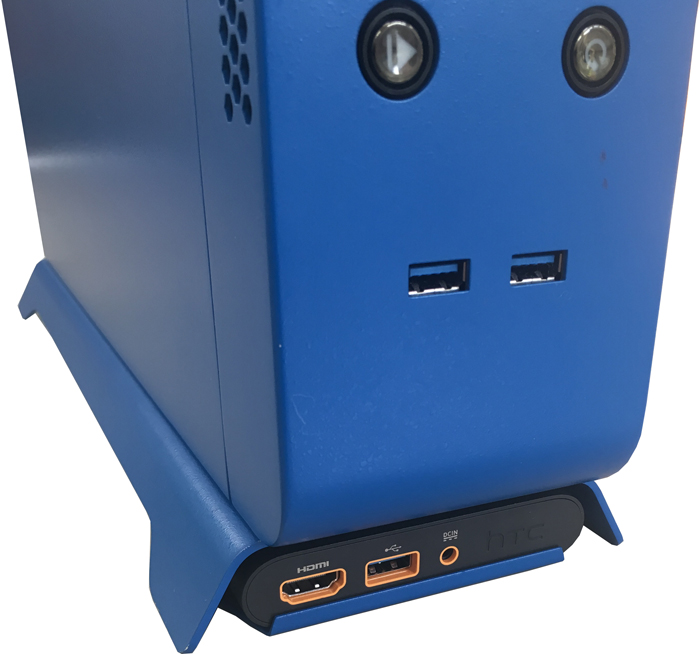 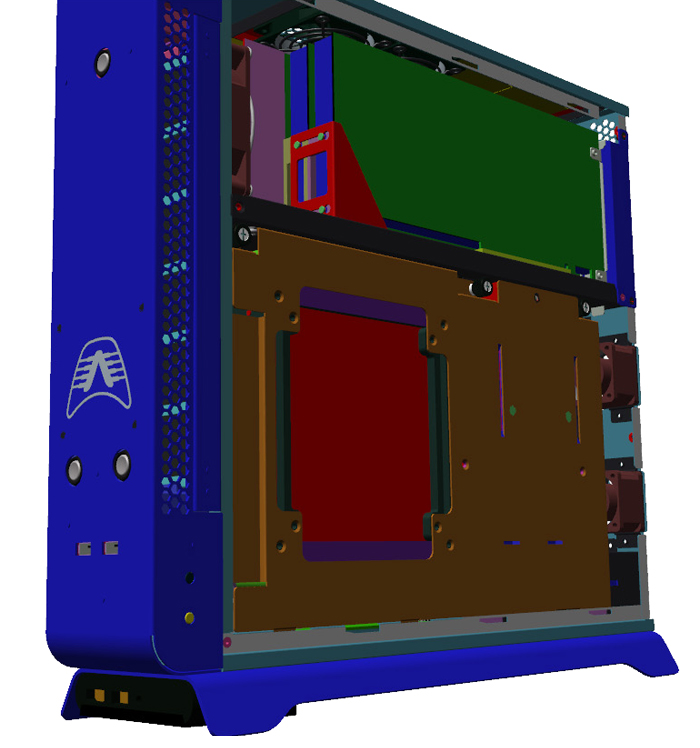 On a desktop FHD (1,920 x 1,080) display, where the demands are so much less, the machine performed extremely well. We experienced smooth rotation of models in SolidWorks with realistic materials and shadows; also with large BIM models in Revit (although in this CPU-limited applicatiohown you’d get just as good 3D performance with a lower-end GPU).

Before our second Radeon Pro WX 7100 started to feel left out, we swapped VR for physically-based rendering and set both GPUs to work in the multi-GPUaware Radeon ProRender for 3ds Max. This free plug-in is one of many AMD is developing for 3D applications, including SolidWorks, Rhino and Cinema4D. Other popular GPU renderers that would benefit from this dual-GPU set-up include Chaos Group’s V-Ray RT, which plugs into Revit, SketchUp, Rhino, 3ds Max and others.

After a few minutes of hardcore processing, those fans kicked in again. Noise levels rose but to nothing too dramatic. Considering the size of the box and the combined peak 260W drawn by the GPUs, we found this quite impressive.

If more performance is needed from a single GPU, the two single-slot cards can be swapped for a single dual-slot card, such as the Nvidia Quadro P5000 or Quadro P6000. While our review machine was optimised for GPU rendering, the Magnetar V25 can also be tuned for CPU renderers like Luxion KeyShot or V-Ray.

The liquid-cooled ‘Kaby Lake’ quad core Intel Core i7 7700K CPU is dynamically overclocked to run at 4.7GHz, so is a great choice for CAD and VR applications which love high frequncies. And while it finished our 4K KeyShot test render in 670 secs, if you want to cut that time significantly you’ll simply need more cores. Here, the machine doesn’t disappoint because, despite its slimline chassis, Armari can offer a choice of Intel Core or Xeon chips, all the way up to 22 cores. In addition to better rendering performance, adding more cores should also reduce the time it takes to import models in VR applications like Autodesk VRED Professional.

A Xeon version of the V25 would also have the added benefit of supporting up to 64GB DDR4 memory (the Core i7 version is currently limited to 32GB).

For storage, our test machine relied on a single drive – a fast 512GB Samsung SM961 NVMe SSD that sits flush on the motherboard. However, to get more GB for your money, this can be supplemented with 2.5-inch SATA HDDs, if required.

Even with a tiny chassis, the V25 is surprisingly serviceable, though can be a bit tricky in places. To access memory and NVMe storage, simply remove the metal side panel, followed by three thumb screws that secure the CPU’s 14cm radiator and fan. Detaching this also gives you access to the GPU cage and riser board, which can be released by removing another three screws. The 750W low-noise, server-grade Power Supply Unit (PSU) is cold-swappable, and is removed by pulling the handle at the rear of the machine. There’s also a neat replaceable dust filter that pops out from the side of the box.

The CPU fan/radiator panel is removed with three thumb screws 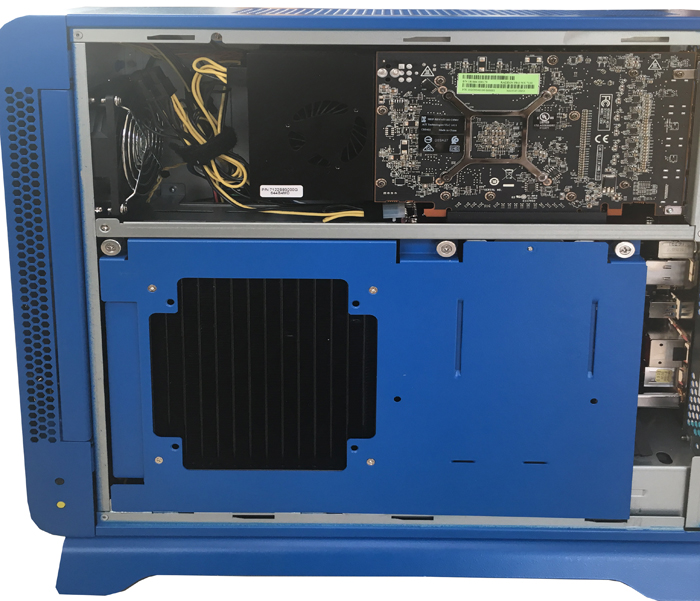 In addition to a dedicated cage for the HTC Vive link box, the chassis has one other VR-friendly feature. Two programmable buttons on the front of the machine can be used to quick launch or reset VR demos. This could be useful for client presentations, as it can save you having to fiddle around for the mouse.

The Armari Magnetar V25 is a great little machine for VR. The slimline form factor makes it easy to transport and the VR link box cage is a simple and elegant piece of design to help keep those annoying VR cables in check.

Considering the size of the chassis, it is amazing that the V25 offers such flexibility with its internal components, including a choice of multi-core Intel Xeon E5-2600 CPUs to cut through rendering or model import times.

Having two AMD Radeon Pro WX 7100s is great if you are heavily into GPU rendering, but if you want to bring down price and still get enough performance for design viz and entry-level VR applications, then you can reduce this to one. Conversely if you need more GPU power for more demanding VR and high-end viz applications, upscale to an Nvidia Quadro P5000 or Nvidia Quadro P6000.