Google Cardboard offers a VR experience with a standard smartphone

When it comes to Virtual Reality (VR) for architecture, it may be the Oculus Rift and HTC Vive that grab all the headlines, but the Google Cardboard still has plenty to offer.

The big benefit of the entry-level VR viewer is that it does not need a powerful workstation. Instead, it works with a smartphone and, as the name suggests, is made from cardboard. Simply assemble the viewer, slot in your phone, download the relevant app and away you go.

With Google Cardboard viewers costing around £15 and being compatible with most modern smartphones (iPhone and Android), the beauty of the Cardboard is that it gives almost everyone easy access to VR.

Although it lacks the positional headtracking capabilities of the Vive and Rift, it can still be a very powerful communication aid for clients and architects alike.

This has not been lost on Graphisoft, the developer of ArchiCAD, who recently added support for Google Cardboard viewers (v 2.0) to its impressive BIM presentation and communication tool, BIMx.

Most architectural VR experiences on Google Cardboard tend to be 360 panora – mas. These are essentially wide-angle panoramic images that deliver a full 360-degree snapshot of the world around you. Applications that offer this functionality include Chaos Group V-Ray, Nvidia Iray VR Lite, Autodesk A360 Rendering, Iris VR Scope, Yulio, Lumion, Vectorworks and many more. Many of these applications are physically based renderers, so the quality is impressive and includes realistic lighting and materials. The big downside is that the VR experience is tied to a static position.

Graphisoft BIMx is different insofar as it offers users a fully navigable VR experience. Explore a building on ‘foot’, simply by looking in the direction you want to walk. Navigation is very intuitive.

From ArchiCAD to VR

BIMx was originally designed to extend the reach of rich ArchiCAD BIM models to clients, site workers and other AEC professionals. It started out as a PC and Mac app, but is now also available for iOS and Android. The Google Cardboard VR capability is only available for smartphones.

BIMx models are produced in ArchiCAD. No special export process is required to make them VR-ready. Simply load up your ArchiCAD model, click File > Publish BIMx Hyper-model, then set a few options including Global Illumination (for more realistic shading) and background. Most of the models we tested took under a minute to publish. However, when Global Illumination (GI) was turned on, processing time increased significantly. Our most complex ArchiCAD model took over 30 minutes to publish with Global Illumination turned on, but only a coulpe of minutes with it turned off. BIMx models can be saved locally or pushed to the cloud using BIMx Model Transfer.

Models can be published with plans, elevations and sections, with slick links between the different views, but for VR, we’re only really interested in the 3D model.

To view the model on a mobile device, you first need to download the free BIMx app. Next, grab your model from your choice of cloud storage — BIMx Model Transfer, Dropbox, OneDrive or iCloud Drive — then tap on the 3D model in your list of views. To enter VR, simply select the three dots pull-down menu, then hit Cardboard VR.

Google Cardboard viewers come in several different formats, so it’s important to set up the BIMx app accordingly. To configure, simply point your smartphone’s camera at your viewer’s QR code and the app will calibrate automatically. Next, place the smartphone in the viewer, line up the centre line and away you go.

There are two main control methods inside VR – your head, which you use as a cursor, and the physical Google Cardboard button, which is located on the top of the viewer. Clicking on this brings up your menus.

To set you on your way, use your head to point your cursor to the walking mode icon, then click the Google Cardboard button. The direction in which you walk is controlled by your head. For complete freedom, it’s best to do this standing up. Alternatively, sit on a swivel chair.

To stop walking, simply click the physical button. Here you will see more icons, giving you the option to take a couple of steps back or, if you are in a hurry, increase walking speed. The software stops you walking through walls but allows you to pass through doors. It automatically guides you up and down stairs.

Navigation takes a little bit of getting used to, but once you get to grips with it, it’s all very intuitive. Use the pause button to give you time to explore rooms from all angles.

Instead of always having to explore the building along a linear path, BIMx lets you teleport between locations in the model using bookmarks. These are defined as cameras inside ArchiCAD and need to be added to the model before publishing the BIMx file. Bookmarks are also useful for giving clients guided tours of a building to highlight specific features. 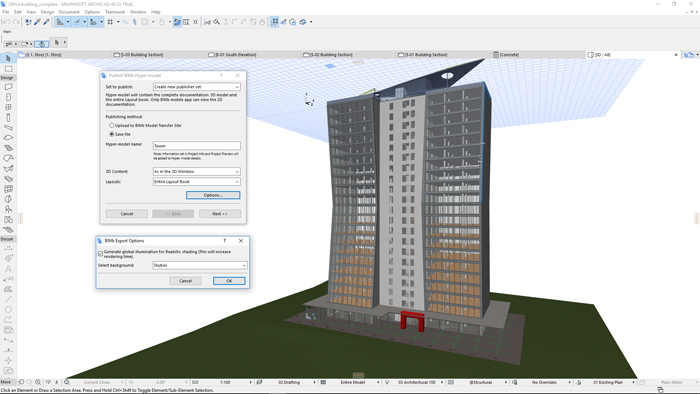 Publishing a BIMx file in ArchiCAD 20

If you haven’t set up any cameras in advance, you can still navigate to other parts of the building without having to walk there in VR. Simply jump out of VR, grab your smartphone and pinch and zoom to the appropriate location, then reenter VR.

Considering BIMx is running on a smartphone (we tested on the iPhone 6S), the render quality is very good, even with GI disabled. Models can be viewed in several different shading modes, including realistic, hidden line, simple shading and black and white, which is useful for earlystage proposals. Navigation was smooth on the majority of our test models, although there was a little flicker on our largest dataset. Some of our testers also experienced a touch of motion sickness, particularly when walking at pace. This is likely to pass, once you get your ‘VR legs’. 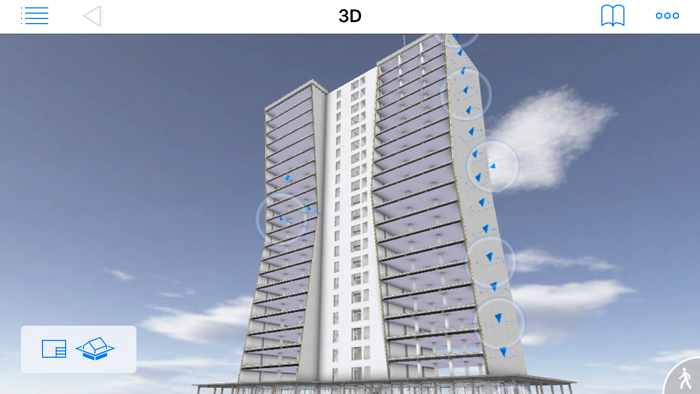 Viewing the 3D model on an iPhone 6S

BIMx for Google Cardboard might not offer the fully immersive experience of an HTC Vive or Oculus Rift, but it’s still an impressive architectural VR tool.

It’s powerful enough to give clients, engineers, architects and contractors a better spatial understanding of a building and, with the ability to go from ArchiCAD to VR in minutes, fast enough for iterative design workflows. What’s more, pretty much anyone with a modern smartphone and a spare £15 can get on board.

At the moment, the functionality is limited to navigation only. It will be interesting to see if Graphisoft starts to bring over tools from the tablet version of the software or add support for the Vive and Rift in the Windows desktop BIMx application. 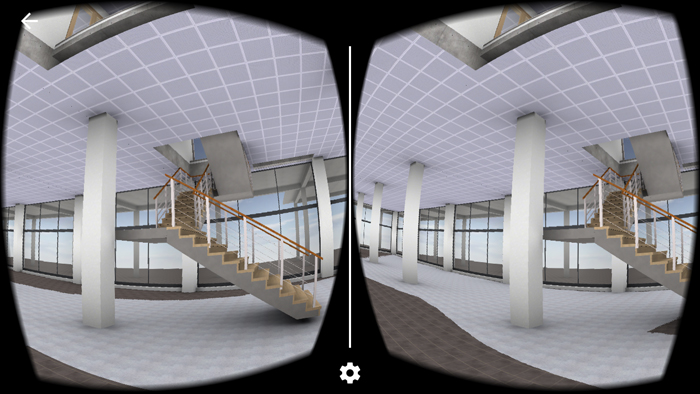 Navigating the model in VR on Google Cardboard

ArchiCAD VR on the Vive and Rift

ArchiCAD users looking for a full-blown VR experience on the HTC Vive or Oculus Rift should look at Iris VR Prospect, as reviewed in our ‘Revit to VR’ feature.

IrisVR Prospect does not currently support native ArchiCAD models, but it will do in the future.

While we are waiting, the good news is that there is already a workaround. ArchiCAD users can export an ArchiCAD model as a Sketchup file, then drag and drop the file into the Prospect launcher for viewing in Virtual Reality.