With the launch of ArchiCAD 20, Randall S Newton visited Graphisoft’s HQ in Budapest to hear how fresh thinking and a powerful partnership are shaping the company’s approach to open BIM and collaboration

Graphisoft, the maker of ArchiCAD, is a division of the larger Nemetschek Group, which recorded record revenue of €285.3 million in 2015, up 30% on the previous year.

The newest version of ArchiCAD is now out and offers some great new features, but to listen to Graphisoft vice president for Europe, Andras Haidekker, you would think that the company faces major challenges. Of course it does — but no more than any other forward-looking software company in this market.

Graphisoft’s leadership team knows that, in order stay relevant, the company has to move BIM forward, not just as a modelling system, but also as an information management system. That’s a challenge when almost half of your potential audience are still scratching their heads and only just starting to think about maybe trying this new BIM thing.

With its new ability to work with Rhino data, and additional new features relating to import and use of metadata, Graphisoft says it’s on a mission to put the ‘I’ in BIM.

“Information is power,” ArchiCAD implementation team leader Tibor Szolnoki told me on a recent day-long visit to Graphisoft’s headquarters in Budapest. “Information is an asset architects can sell.”

The ‘M’ in BIM, meanwhile, is now about management, not models, as I heard several executives say on my trip to Hungary.

To put it another way, Graphisoft executives believe that few architects are using the information management capabilities of either BIM or the open IFC construction data model. “Between the desktop and the mindset, there is a big gap,” says Szolnoki. Increased mandates from government for IFC-compliant documentation is changing things, but it isn’t just customer reluctance that Graphisoft needs to tackle. It also has to sell its customers on new workflows.

Here, Graphisoft believes it has found a great partner in Bjarke Ingels Group (BIG), a progressive architecture firm with headquarters in Copenhagen and a major office in New York. BIG prides itself on being ‘edgy’ in its technology choices and design instincts. Its principals talk of ‘sustainable hedonism’ as a guiding philosophy.

BIG uses Rhino 3D as its go-to CAD for early stage conceptual design.early stage conceptual design. Like other ‘rock star’ architectural firms already using Rhino, BIG went nuts over the arrival of Grasshopper, an add-on module to Rhino for algorithmic design (also known as ‘generative design’ or ‘computational design’, depending on which vendor you speak to, because Bentley and Autodesk also offer these tools).

BIG’s edgy Scandinavians are also shrewd technologists. They saw that their elegant, algorithmic designs were being tossed over the proverbial wall to the schematics team for complete detailing in BIM, with no live connection between the concept data and the schematics, and knew this needed to change. The information link was as broken as if they had delivered their ideas on paper.

Luckily for them, Graphisoft had spotted the same problem among its existing client base. In 2015, the company started sharing an early beta release of a live link between Rhino and ArchiCAD that could provide two-way data exchange.

“They came to us because it was taking too long for their innovative designs to become construction documents,” says Haidekker.

BIG found out, and asked to take part in the testing process. To cut a long story short, BIG’s Copenhagen office is now standardising on ArchiCAD 20 as its software for schematics and construction detailing. The read-write of Rhino+Grasshopper data was a big reason, but so was the full information management package ArchiCAD 20 offers.

“BIG is very design-oriented,” comments Haidekker. “They wanted to reduce time on documentation. They see with ArchiCAD for BIM they can work three to four months on concept design and then create project documentation in one to two months.”

Information management drove BIG into the arms of Graphisoft, and this seems to have triggered a domino effect. Graphisoft’s dealer network is adding Rhino to its portfolio and BIG’s competitors are now looking at ArchiCAD with fresh eyes. “We are now invited to companies who use Rhino,” says Haidekker. “Some big players, the so-called ‘blobby architects’.”

Many architects prefer to use best-ofbreed ‘point’ tools, as opposed to being limited to a single vendor’s product line. Rhino has become the point tool of choice for initial concept design. McNeel and Graphisoft worked together closely on the implementation of the live link between Rhino+Grasshopper and ArchiCAD to advance schematic design and construction detailing for their mutual clients. 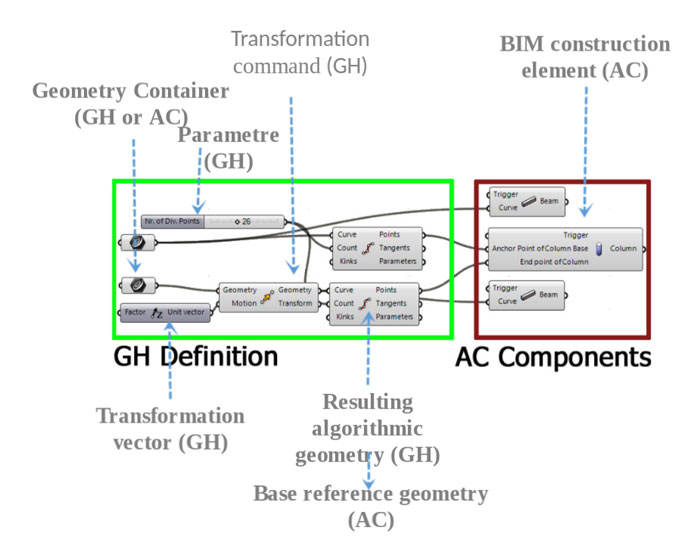 More than meets the eye

Full compliance with IFC 4 in ArchiCAD 20 opens the door to new, more streamlined workflows to keep information live and useful throughout a project. Two new workflows in particular, Design Transfer View and Reference View, allow architects to work more closely with other disciplines while utilising the same BIM. They allow custom, discipline-specific views to be created. The combination of these new data-oriented workflows with the new graphical representation tools Smart Filters and Graphical Favorites (see here for more details) means increased visibility for full data about doors, pumps, curtain walls and all other manufactured or custom-crafted elements.

To work better with data that is still being stored in those ubiquitous Excel spreadsheets, ArchiCAD 20 offers Mass Property Value Import, a tool for the semi-automated import/export of data. It isn’t push-a-button yet, but it does remove the tedium of manual entry of product data into BIM schedules, and reduces the inevitable mistakes that this process so often introduces.

Randall S. Newton is a business analyst and journalist with more than 30 years experience in the AEC and manufacturing design industries.

Click here to read our review of Graphisoft ArchiCAD 20.