One of the largest infrastructure projects ever undertaken in the Netherlands is on track for completion in 2007. Cees Veerhoek explains how 3D CAD was used during the construction.

The 160-kilometre Betuweroute double-track rail line – with a design speed of 120 km per hour and an axle load maximum of 25 tonnes – links the Dutch city of Rotterdam with Zevenaar on the Dutch-German border. It is the first rail track in the Netherlands dedicated to the transport of goods, carrying freight from one of the worldÝs largest ports to the continentÝs interior. The rail line will decrease traffic on the motorways, and is expected to triple yearly revenues of goods traffic by train from the Netherlands to other European countries.

The ?4.8 billion Betuweroute project was started in 1991 and entailed an upgrade to the existing port/rail track as well as the construction of a new track. The project also entailed creating a new freight yard at Maasvlakte, adapting the marshalling yard at Kijfhoek, and realising a Container Interchange Point near Valburg. An important design requirement for the new construction was to preserve the landscape as much as possible. As a result, the whole line had to be situated over a length of 95 km parallel to the A15 motorway. For this reason, 60% or more of the A15 motorway in the Province of Gelderland had to be relocated.

As a point of principle, the Betuweroute and the A15 motorway had to remain at surface level as much as possible and the intersecting infrastructure had to be guided over it, which was a drastic operation. At least 14 interchanges and several motorway junctions had to be changed. The most important key challenges were the realisation of 7.5 km track built underground with deepened lines, five tunnels with a length of 18 km (including three bored tunnels), 130 viaducts/bridges with a total length of 12 km, 140 km of noise barriers, 5,600 overhead gantries, 600,000 sleepers, and 190 fauna passages to enable animals to safely cross under the rail lines.

The Betuweroute and the redesign of the A15 motorway were completely designed in 3D, which provided important insight into spatial occupation as well as accurate calculations of ground quantities. Among the many project design challenges were the alignment of connecting arcs with existing track, design modification to motorways that crossed the new track, and collaboration with many local authorities. Also, the required earthworks, phased during the implementation of the work, were modelled and used throughout the whole project for generating output data and quality control. 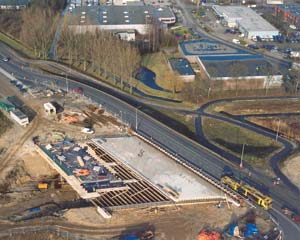 On behalf of the Dutch Railway Authority (Managementgroup Betuweroute), the consortium of two Dutch engineering companies formed specifically for the project – VOF Grontmij-De Weger – delivered the Betuweroute design from Rotterdam to the German border (120 km). VOF Grontmij had the responsibility of explaining the different alternatives, including below-grade lines, and tunnels from both an environmental and cost perspective. Part of the challenge arose from the fact that most of the people in the involved municipalities were not familiar with engineering and would have had a great deal of difficulty understanding traditional 2D drawings.

The Betuweroute largely passes through populated areas, and each of the municipalities representing those communities in the rail lineÝs path had concerns about noise, air pollution, and visual appearance. In many cases, the municipalities asked the designers to make changes to the rail design, and then asked to see how the track would look after their changes had been implemented. Use of a 3D model significantly shortened the time required to complete all of these changes. Reason: After the model has been changed, it could be used to easily and quickly update all of the related documentation.

Many of the local municipalities wanted to put the track below ground level, and if they all had had their way, the cost of the project would have exploded. So VOF Grontmij rendered the 3D model and created visualisations from the point of the view of the inhabitants near the track, drivers on a nearby road, and the conductor on the train in order to show the municipalities exactly what VOF GrontmijÝs proposal would look like. These visualisations were so realistic that the officials had no difficulty understanding them. In most cases, the models convinced them that the consortiumÝs solutions would be acceptable. As a result, only three sections of tunnels, with a total length of about 25km, were required, saving hundreds of millions of euros.

The 3D design methods also simplified the task of aligning the route of the track across the Dutch landscape. The 3D model made it much easier to evaluate alternative routes in relation to considerations such as connecting arcs with existing track, adapting to roads that crossed the track, developing the appropriate grade for tunnels, calculating the amount of earth that needed to be moved during construction, and determining the exact amount of space occupied by the right-of-way. It was possible to change long, complicated sections of a complete junction – including the generation of all necessary work drawings – in a few hours vs. the days that would have been required to redo many drawings using conventional 2D methods.

VOF Grontmij-De Weger began using Bentley MxRoad (MOSS) back in the mid-1980s because the company recognised – much earlier than most other design firms – the potential for 3D CAD to improve both the design process and communication with stakeholders. VOF Grontmij originally selected MxRoad because it was the only software package that made it practical to develop large projects fully in 3D. Since that time, the competitive landscape has changed considerably and there are many more alternatives, but MxRoad is still by far the best choice for larger projects.

Producing the design in 3D dramatically simplified collaboration and significantly impacted workgroup productivity. Multiple people from different disciplines, all of whom were required to meet the projectÝs tight timeline, could simultaneously access project files. Each person worked independently, yet everyoneÝs work was referenced in the master model. In other words, each team member had view-only access to the entire model so he or she could easily see the work of others in relation to his or her own.

The use of standards such as string labelling, model name conventions, and input files maintained consistency between the various designersÝ work. Eight years may seem like a long time to design a railway, but considering the magnitude of the project, it was remarkable that VOF Grontmij was able to finish the project on time. Throughout the course of the project, the company designed every section of the line a minimum of nine times. MxRoad made it possible for VOF Grontmij to adapt to the changing requirements and opinions of the project stakeholders almost as fast as they could express them. And MxRoadÝs powerful visualisation tools helped VOF Grontmij clearly communicate the impact of various alternatives. The company does not know of any other software package that could have provided these important capabilities.

Cees Veerhoek is Manager for the VOF Grontmij Rail Department. This article first appeared in the April 2006 edition of GEOconnexion International Magazine.