A new polygonal modelling add-on for Rhino gave furniture craftsman Peter Donders, the control he needed to bring a 1913Ýs seat design to life as part of a major project to return BlackpoolÝs Grand Theatre to its former glory. by Brett Duesing, Strategic Reach

BlackpoolÝs Grand Theatre has been the centrepiece of BlackpoolÝs Art District since 1894. And today the 1,100-seat Victorian auditorium continues to function as the townÝs community theatre, LancashireÝs preferred opera house and BritainÝs National Theatre of Variety.

The Grand Theatre in Blackpool, UK, required 1,100 new Victorian-style seats for its restoration. JEZET-Seating was approached in 2002 to supply the new seating for the theatre, but the company found there was no suitable period seat commercially available.

Restoring the structure to its former glory involved some unusual challenges ± one of which was replacing the seats. Jezet-Seating was contracted to the task, but could not find auditorium seats in the commercial market that matched the Grand TheatreÝs distinctive turn-of-the-century opulence.

The solution for the thousand-chair order involved the commission of Belgian furniture craftsman Peter Donders, who was not only familiar with traditional methods of chair-making, but was also savvy in the computerised art of 3D industrial design. To make new chairs look convincingly antique, Donders uses a 3D method for product development called T-Splines for Rhino.

ýAfter much research and development, we produced a new seat based on a design by A. R. Dean of Birmingham, circa 1913,¯ explains Donders. ýI came in around September 2006 for the 3D design and produced the chairs in about nine months. The seats have cast stanchions with beech-frame backs and swabs.¯ 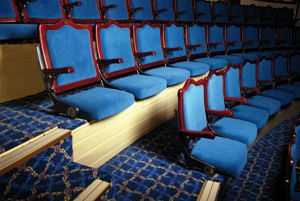 Donders started his career making single custom chairs by hand. Now through use of 3D production methods, he designs seats that fill whole theatres and stadiums. For the Grand, Donders composed the chair design in Rhinoceros, a 3D CAD modeller best known for its ability to generate curved surfaces with pinpoint accuracy, as mathematic equations called non-uniform rational b-splines, or NURBS.

ýI had some 15 years experience as a furniture designer and builder before I ever even considered using computers,¯ says Donders. ýNowadays, using the computer is pretty much like using any other tool that facilitates the design and development process.¯

Last year, Donders discovered the beta of the T-Splines plug-in for Rhino ýjust in time¯ for his Grand Theatre project. The program operates inside the surface modeller, and gives Donders and other industrial designers a tremendous enhancement in modelling flexibility.

ýRhino is well known as an excellent free-form surfacing package. What T-Splines brings to Rhino is the ability to have even more organic shapes,¯ says Matt Sederberg, CEO of T-Splines, which developed the plug-in. T-Splines leverages both NURBS, and whatÝs called polygonal or subdivisional surfaces, to generate shapes. Polygonal modelling is common in modellers for advanced animation, but until now has not been accessible to those who build products.

ýPixar uses polygonal and subdivision surfaces modelling technology to create 3D animated characters,¯ Sederberg explains. ýA lot of industrial designers have started to look towards this type of modelling because itÝs much easier to get a nice complex surface with smooth transitions between features.¯

Rhino produces NURBS that start out as rectangular planes, which then can be bent and tweaked to form the curve the designer wants. To make an irregular form that is a self-contained volume, designers typically have to panelise the form with a patchwork of NURBS. With T-Splines, on the other hand, designers can use polygonal or sub-divisional modelling techniques, beginning with a 3D volume that can be stretched, extruded, and twisted, while maintaining the volumeÝs continuity. 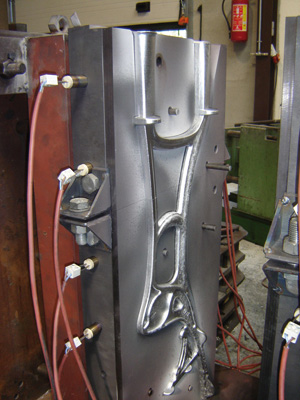 The final NURBS computer model is sent to automated CNC mills via IGES files to cut the prototypes and ultimately the moulds for 900 PC aluminium casting.

ýWith T-Splines, we can make a non-rectangular shape that is one surface and smooth everywhere,¯ says Sederberg. ýIf we made this shape in Rhino without T-Splines, we would have to spend a lot of time making sure the edges of composite surfaces patch together correctly without gaps or misalignment. ÙYou donÝt have to deal with patches.Ý — thatÝs just a few words, but thatÝs essentially what T-Splines mean to Rhino users. ItÝs a huge time-saver.¯

There are a host of polygonal based modellers already on the market, according to Sederberg, including brands like 3ds Max, Hexagon, modo, and Silo. The limitation to these applications has been that they produced pretty pictures ± animation, film effects, or video-game scenes ± but could not be linked to NURBS, which product designers use to communicate geometry to factory machines. Through T-Splines in Rhino, these two separate modelling methods are finally linked in tandem. Polygon-produced shapes can now be produced as real-world objects.

ýT-Splines is the first program to actually do that polygonal modelling in a way thatÝs compatible with NURBS,¯ he says. ýWith T-Splines, you can easily get very complex geometries, and in the end be able to manufacture it.¯

DondersÝ chairs give an excellent example of how polygons and NURBS can now come together in a design process.

ýMany of the chair parts are surfaces that Rhino can model very well all by itself,¯ says Sederberg. But one highly detailed part – the ornately curled stanchion under the arm of the chair – makes it a prime candidate for polygonal manipulation.

Donders modelled the stanchion in a popular polygonal modelling program called Hexagon, and then brought it into T-Splines in Rhino, where he seamlessly converted the shape to NURBS. ýItÝs just a push-button operation to convert the data. Without additional work or editing, the designer has an extremely complicated ironwork design ready for fabrication,¯ says Sederberg. ýThe Blackpool project focuses on one aspect of the T-Splines plug-in ± the ability to convert low-polygon-count meshes to T-Splines inside Rhino, so that the form can be manufactured,¯ Sedenburg says.

As for the Grand Theatre, the audiences are now seated in style after the completed restoration. Donders may have stumbled upon something big with his revival design. ýThe architect who built the Grand in 1894, Frank Matcham, built almost 30 other public auditoriums and music halls throughout the UK,¯ says Donders. The popular appeal of MatchamÝs theatres has spawned a national society to preserve his work. Donders has just received orders for hundreds more chairs – to fill rows in the Royal Hall in Harrogate, as well as another location in the West End of London.

The T-Splines plug-in for Rhino version 1.0 was released in September 2007, and is now available through the companyÝs website, or through various Rhinoceros resellers. The module contains a suite of polygonal modelling and surface building tools, along with the flexible data translation capabilities for models from other applications.