A four-year improvement programme at Wimbledon’s All-England Club was staged around the annual tennis championships, a feat that required collaboration among the design team, main contractor, and supplier fabricators. Initiated in 2005, the construction project included redevelopment of the east stand of centre court, extension of the terrace to provide an additional six rows of seating, and the addition of a retractable roof for play in adverse weather conditions.

Centre court: The structural design of the retractable roof was modeled from the outset in Bentley Structural and MicroStation TriForma.
Image courtesy of Bentley Systems

The refurbishment was part of the venerated club’s 25-year master plan, which was produced in 1992 to make the experience of the championship the prime tennis event in the world, says John Westmuckett, a director with structural consulting engineers Westmuckett Hawkes. Mr Westmuckett participated in the master planning and stage one structural design while associated with Building Design Partnership, an interdisciplinary design practice based in Manchester. The key proposals of the masterplan, he explains, were to construct a new No. 1 court and media centre, redevelop existing courts to make room for two more courts and additional spectator space, and redevelop the centre court to provide more debenture space.

The preliminary design of the planned projects kicked off in the early 1990s and construction of the final stages was scheduled for completion in 2010. The design for the redevelopment of centre court commenced in the summer of 2003 with concept studies and schemes that took into account the whole process — from early enabling works, demolition of the original 1922 East Stand, and removal of the existing roof to reconstruction of the stand and new fixed roof as well as development and installation of a retractable roof that could be deployed in just 10 minutes.

Throughout the project, 3D structural design played a vital role. The structural design of the retractable roof was modelled from the outset in Bentley Structural and MicroStation TriForma. The first task was to create a model of the existing structure and site constraints. “As the design progressed and the trade contractors became involved, their production models were incorporated and checked against this base model,” Mr Westmuckett says. “This ensured full co-ordination and understanding of these key interfaces.”

Although originally employed as the project director for the main structural consultant Capita Symonds, Mr Westmuckett also had a hand in all subsequent stages of the redevelopment project while in the employ of various companies being retained as a sub-consultant to Capita. As structural director at Edge Structures, an engineering practice based in London and Leeds, Mr Westmuckett conducted design co-ordination sessions for multiple contractors and disciplines using Bentley software to promote creativity via open forums and design workshops. Drawings, sketches, and images combined into live models were manipulated on screen to communicate with stakeholders, which encouraged individual as well as collaborative innovation.

The ability to quickly visualise how new proposals could be constructed was key to the phasing of work between the championships. Galliford Try, the main contractor, embraced this technology as a tool to inform major strategic decisions. This was vital to the success of the project. Each phase of construction not only had to be completed within the time period, but it also had to be adapted to allow a championship to be staged with no loss of quality of experience to the public, members, press, and players. For instance, the decision to have one championship without a roof was not taken lightly. 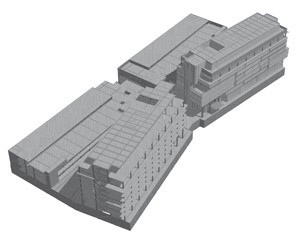 Initiated in 2005, the construction project included redevelopment of the east stand of centre court, extension of the terrace to provide an additional six rows of seating, and the addition of a retractable roof.
Image courtesy of Bentley Systems

“It was not possible to complete and clad the whole roof in one nine-month period, which included the construction of terraces in the east wing. Although the team considered several scenarios with a partially completed roof, the decision was made to forgo the roof construction for this year,” Mr Westmuckett says. “Of course, that year it rained — a lot.”

Speed of erection was vital once the team moved into each new phase. During construction staging, a trial testing and erection regime was carried out at a site in northern England. The 3D design models were built up in sections and presented in workshop sessions with the design and construction team to establish the erection procedure.

“The whole process was carefully monitored and reported so that what was learned at this test could be applied in the more congested site at Wimbledon,” Mr Westmuckett explains.

Solutions to speed on-site construction included prefabrication of sections of box trusses complete with air handling units that were fabricated and stored locally, ready for installation immediately upon completion of a championship.

The 3D design technology facilitated procurement and communication of information with fabricators. For example, a CD of a complete model of the precast concrete terraces was given to the precast manufacturer, which then produced its own shop drawings. The model also had the steel stools that supported the units. This was issued to the steelwork contractor, which then produced the steel raker beams and supporting structure. “It was difficult to find a better and simpler way of ensuring the accuracy of this interface,” Mr Westmuckett says.

The use of Bentley Structural and TriForma in the development stages of the design and the integration of other professionals’ work in 3D minimised the necessary design resources. Rather than preparing and issuing 2D drawings and details, the presentation of live models on screen showing work in progress kept large meetings well focused on the key issues, enhanced communication, and saved valuable time normally lost in digital exchange and long-distance commenting. “The ability to interface with different CAD and software files and to present in live working sessions to inform and discuss key issues was invaluable,” Mr Westmuckett says.