When the City of London Corporation needed sophisticated surveying performed at the Poultry Market at Smithfield, Plowman Craven had the supply to meet its demands

Constructed in 1953, the Poultry Market is a Grade II-listed building in the heart of London that forms part of Smithfield Market, the UK’s largest wholesale meat market.

Designed by Arup, and built between 1961 and 1963 to replace a Victorian building destroyed by fire in 1958, the Poultry Market’s iconic roof is claimed to be the largest concrete shell structure ever built and is remarkable for its span in relation to its shallow dome. With the building in a state of disrepair, a renovation programme was required to replace a number of services and to refurbish various MEP and structural elements, including the 225-foot roof.

The building’s owners — the City of London Corporation — instructed Arup to scope out the programme, with surveying firm Plowman Craven contracted to laser-scan and model the building and its surroundings, as well as providing condition and MEP surveys.

A mix of approaches

Various approaches were used by the Plowman Craven team, each producing different outputs.

One output, for example, was full-colour, 3D point cloud data of all internal and external areas. The survey team spent three weeks scanning the interior and exterior of the building, covering everything from communal public areas to hard-to-access ventilation inverts. Using Leica P40 and Faro laser scanners, they worked upwards from street level to the roof. Controls were put out on the roof to assist in the subsequent UAV survey.

Another output was HDR panoramic photography. Here, the team realised that reaching the highest points inside the Poultry Market, to create a traditional condition report, would be impossible without a cherry-picker. So, in order to provide the client with a full visual report of the state of the building to accompany the descriptions, they deployed a 360-degree iStar camera to record the interior of the entire structure, with images being taken from the exact same locations as the laser scans.

Finally, survey-grade data and interactive high-definition panoramic photography was achieved using a UAV [unmanned aerial vehicle] or drone. The decision to use the drone was an obvious one, given the challenges involved in surveying the roof. Access through the back staircase was a problem, given that a 7-metre mast would be needed for a traditional laser scan and a variety of health and safety issues complicated matters further — not least the risks associated with working at height. Instead, Plowman Craven flew its drone 40 metres above the building, using manual and pre-programmed flight paths to capture the entire roof, canopies and all connected structures in a fraction of the time a laser scan would take. The resulting 360-degree panoramas captured by the UAV were also fed into the condition capture report. 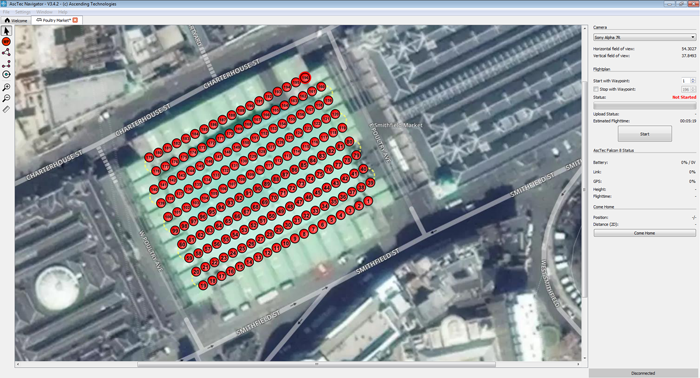 These outputs were used in a number of deliverables. One was the condition survey: as Plowman Craven points out, it can deliver a traditional PDF survey, but its Condition Capture report product is “far superior”, combining a written schedule with high-definition panoramic photography, to create a “very usable” tool for clients. A site plan is also incorporated into the condition survey, along with hot links that take users to points of interest or particular defects, and the entire survey can be accessed via an online portal.

Plowman Craven’s TruView product, meanwhile, looks like a photo but has spatial data behind it, making it easy to navigate around the entire building and inspect measurements. TruView is based on the combination of scan data and photography captured using laser scan and the UAV, delivering a unique 360-degree view of the point cloud data.

The 3D BIM model delivered takes the point cloud data gathered by the UAV and internal laser scanners and is delivered as a 3D parametric model that, in this instance, was provided to the client in Revit.

Finally, a comprehensive MEP survey was also delivered, providing information on all mechanical and electrical features and covering everything from electrics, gas and water to ventilation and refrigeration installations. These services were surveyed, tagged and traced, loadmonitored and condition-surveyed to compile a comprehensive MEP report presented as 2D AutoCAD drawings, written reports and as part of the 3D Revit model, as well as being linked into TruView and Condition Capture.

“With only partial architectural, mechanical and electrical design drawings available for Poultry Market, the lead designers at Arup recommended a full range of surveys in order to inform the design of the building services and analyse the parabolic structure of the dome with greater certainty,” says Nicholas Somerville, senior principal project manager for the City of London Corporation. 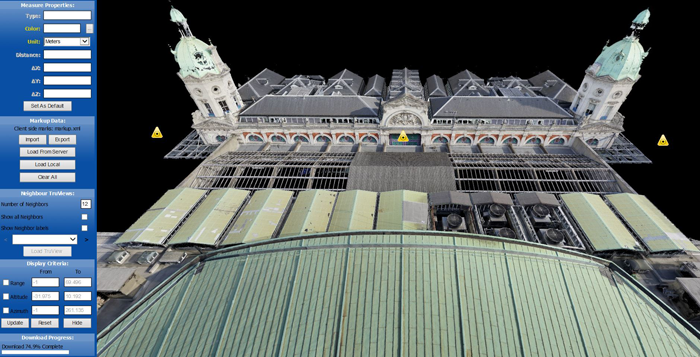 The TruView product has spatial data behind it, making it easy to navigate around the building and inspect measurements

“As such, the City has made a significant investment in surveys, on the basis that a building information model will inform the technical design and de-risk the subsequent works,” he adds. “The surveys supplied by Plowman Craven are very useful resources that capture the building condition at a point in time and we have been very impressed by the quality of information and specialist service provided.”

Safety in the skies above Smithfield 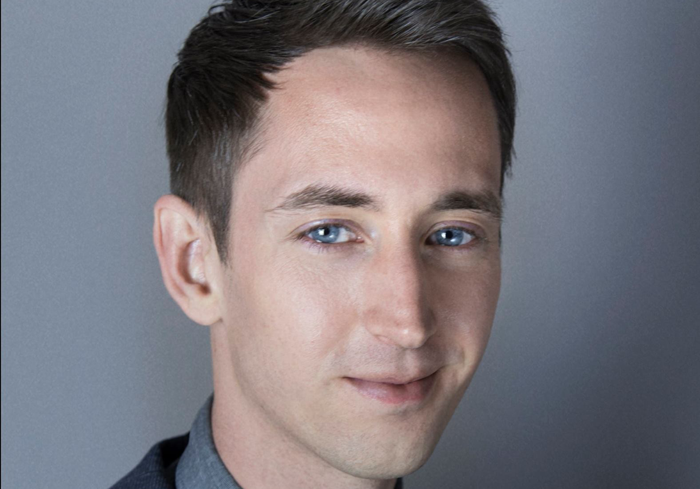 In this interview, Plowman Craven UAV technical manager James Dunthorne explains the precautions taken to make sure that the company’s use of a UAV [unmanned aerial vehicle] to survey the Poultry Market at Smithfield posed no risk to operators, the public or other aircraft.

Q: What are the challenges of flying in central London?

A: The heart of the City is an area of restricted airspace. UAVs are only able to fly with express permission from the National Air Traffic Service (NATS). Our pre-flight planning process involved securing NATS permissions and, because Smithfield is in the EGR158 restricted area, we were also required to notify the Diplomatic Protection Group and London Air Traffic Control.

Additionally, we issued a Notice to Airmen (NOTAM) to the Civil Aviation Authority (CAA), alerting other air users to Plowman Craven’s aerial activities. This comprehensive administration process is vital to ensure all relevant parties are correctly notified and that all legal requirements are observed.

Q: What safety procedures were in place?

A: Once a safe take-off and landing zone was established on the roof — taking into consideration the absence of edge protection — a pre-flight safety check was conducted to ensure it was safe to proceed. In addition to checking battery levels and all control units, this attention to detail included a full Health & Safety risk assessment, right down to having a first aid kit and fire extinguisher on site and establishing the location of the nearest hospital.

Q: Is this standard practice in the industry?

A: We take employee and public safety very seriously, following working protocols that far exceed the required standards. As a case in point, we received a visit from two passing members of the City of London Police, who had noticed our work taking place. As a result of our meticulous planning and strict adherence to regulations, we were immediately able to satisfy them that all necessary permissions and procedures were in place. #

Q: And finally, what kinds of skills were needed to conduct this aerial survey in complete safety?

A: Because of the location and proximity to roads and buildings, the majority of the UAV survey was pre-programmed, using established way points to automate the flight and ensure the drone didn’t accidentally stray over prohibited areas. A number of manual flights were also conducted by our CAAlicenced pilot, to survey additional parts of the roof structure. In addition to a video operator, who controls the drone-mounted camera, extra safety controls were provided by a member of the UAV team at street level. They were in constant communication with the pilot to ensure persons or vehicles were not overflown 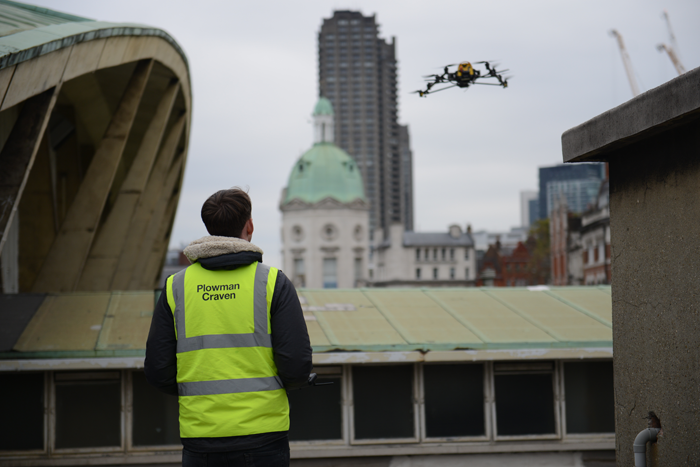 Data transfusion
Set in concrete
Out of the shadows
Radeon ProRender – accelerating GPU rendering
A breath of sea air
Autodesk Subscription
Workstation virtualisation: AMD vs Intel vs Nvidia
24 from the show floor
Previous Post
Next Post