Recording and retaining creative integrity through to the build, while optimising the design around multiple analysis criteria, has become possible for SOM architects since the introduction of Gehry TechnologiesÝ Digital Project software. By Nick Lerner

Al-Rajhi Bank Headquarters is an office complex located in Riyadh, Saudi Arabia. Reminiscent of the ancient monuments of the Middle East, the monolithic concrete piers respond to the harsh desert climate by creating an internalized oasis within the central space.

Recently Skidmore Owings Merrill Architects, (SOM) announced their purchase and planned global rollout of 100 seats of Gehry Digital Project (DP) software. This commercially available development of Dassault SystemesÝ Catia software, which was developed at Frank GehryÝs famous architectural practice, brings the design and production efficiencies, normally associated with auto and aero manufacture, to architecture. Digital Project (DP) is supplied and supported in the UK by Desktop Engineering, which with 21 years in the industrial design and production software business is the UK agent for DP.

Although DP will be new to most of SOM, one part of the practice has been using it for nearly two years with some remarkable results at all stages of its work.

Aybars Asci, design assoc. partner at SOM, explains how his studio operates within SOM. ýThis practice has many different studios, ours recently relocated from New York to London under the mentorship of SOM NY Partner Gary Haney. Part of the reason for the move was to be among, and work with, the talent and culture that can only be found in London. We work as a group of ten exploring our identity and ideas as architects. We are the opposite of a signature architect there is no single genius here; but togetherÍ¯

The group has international commissions and is currently working for Middle East clients in Dubai, Qatar, Kuwait, Saudi Arabia and Riyadh as well as for others in New York and London. The Kuwait project is a 412 m tower, the same height as SOMÝs nascent, Freedom Tower. Their other work is remarkable for its completely fresh optimised forms and novel and surprisingly beautiful aesthetic. On these subjects Aybars has very strong views. ý We do not start out with an aesthetic vision or a preconceived typology. We look at our work in stages, the first being conceptual. At this stage we consider different layers of culture from vernacular dwellings to local customs. We learn from culture by looking in the Middle East for example; at rammed earth walls, the meaning of water, the labyrinth as a metaphor and other social, geological and ethnic symbols. We investigate plans of existing cities and the buildings within them. We write and I encourage our studio to use this and other non-visual techniques to explore the concepts that our work embraces.¯

Because each of the studioÝs commissions is different, Aybars sees its work as similar to that of a bespoke jeweller. The work is clich? free yet contains ideas and forms based on a deep but somehow innocent cultural understanding, which is almost naÈve at the conceptual stage.

At the initial conceptual stage the group spends some time in academic and cultural research. One of its members recently spent time studying 18th century stone cutting techniques (stereotomy) and delivered the results to the group. Of this Aybars commented. 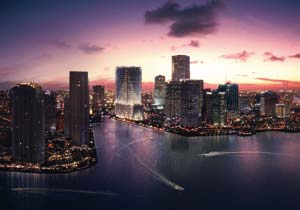 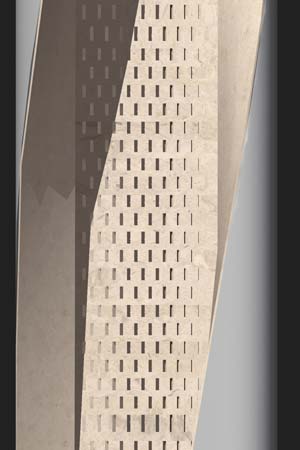 ýWe need this type of input to keep the intellect fresh.¯

By acting as a repository of rules, developed into constraints, DP allows SOM to apply strict scientific rigour to this series of creative activities. And, because DP enforces design rules that have been developed at the creative stage it also contains the groupÝs cultural intelligence.

The stages are set

Rules are important to the group because it is upon their foundation that the next stage of their work is built. Following the Conceptual Stage is the Analytical, and with it comes the change in question from Why? to How? At the Analytical stage, new criteria are applied to the process. Performance-based design using thermal, daylight, wind, acoustic, structural and other analyses inform the design. And, it is on these bases that the conceptual design is tested and optimised.

Throughout these stages the use of Digital Project has become an increasingly valuable tool. Aybars explains how it is used. ýWe generate rules which are kept in DP. These rules are precise, have the highest levels of geometric rigour and are maintained through to construction (the third stage). We write formulae into DP. These allow us to achieve a performative design approach. They can vary from structural form finding algorithms to intelligent staircases that conform to building regulations. It is through these rules that the form is refined. This means that the final design is completely optimised as we progress.

This is not the computer designing buildings; it does however modify them according to inputs of cultural and physics based data. Aybars comments, ýSometimes the rules are in conflict with each other in which case we modify the hierarchy

The parametric and rule based capabilities of DP allows the studio to create genuinely new patterns, forms and shapes. The software also offers choices because sometimes there are several solutions to the same problem. Being based on Dassault SystemesÝ Catia V5, DP offers significant productivity benefits up to and beyond the level of documentation. It also allows the studio to easily fine tune shapes based on further analysis ± or client requirements.

The rules for designs that this young dynamic group creates are handled from start to finish within DP, which has been adapted from Catia V5 not only by Gehry Technologies, but also by a host of contributors including SOM itself. Geoff Haines of the newly renamed DesktopEngineering, DPÝs UK agent, has been providing Catia as part of Dassault Systemes CMP VAR channel and recently hosted the European DP User Group Meeting at the Institute of Physics in London. He said. ýThis cross fertilisation between two diverse engineering disciplines using what is effectively the same software, was bound to happen. Once architects realised the potential for risk reduction and accelerated rule making and output that Catia offers; they were not slow in taking it up.¯

Zaha Hadid Partner, Patrik Schumaker, another user and champion of DP recently elaborated on this view when he said. ý Productivity, creativity and eleganceÍare available from this software¯ 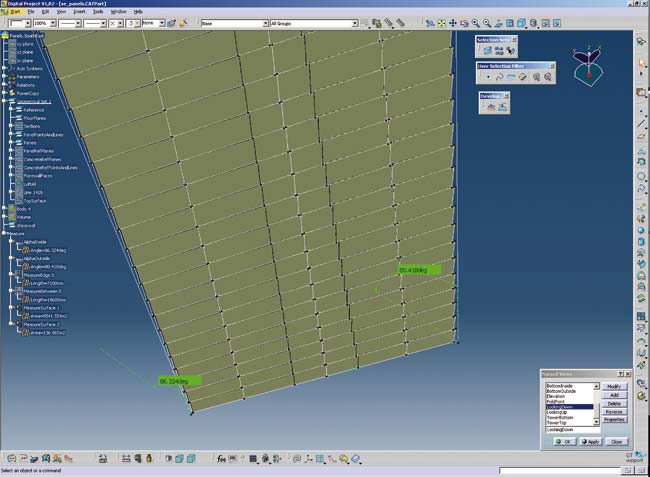 Located in Kuwait City, Al Hamra Firdous Tower anchors a commercial complex comprised of offices, a health club, and a high-end shopping mall with theaters and a food court. Reaching 412 metres, the iconic office tower will be the tallest building in Kuwait.

Haines continued. ýThe ability to combine disparate design-to-manufacturing systems into one coherent system has been known to produce multiple benefits in a PLM context for several years. Boeing, Toyota and many others, use this software and methodology to control the design-to-manufacture process of rule based aeroplanes and cars retaining design intent throughout, in a very scientific way.

ýBuildings have always challenged design and manufacturing technologies. Industry has been able to responded to that challenge with DP, which is being adopted throughout many AEC supply chains and driven by each playersÝ specific needs.¯ Gary HaneyÝs SOM group in London is working on some of the worldÝs most exciting buildings; the levels of creative innovation being applied are very high. For the first time ever the essence of both the creative process and subsequent analysis and production stages can be unified and retained; this produces an often-surprising but ultimately practical outcome with no loss of design intent.