The challenging structures of the stadiums at this summer’s World Cup were brought to life with the help of Tekla software.

When Côte d’Ivoire and Portugal met for their group stage match in the FIFA World Cup in June, everyone’s attention was on Didier Drogba, Cristiano Ronaldo…. and, of course, the vuvuzelas. Few of the 37,000 present or the millions watching the game on television knew that the Nelson Mandela Bay Stadium, which provided the setting for the showdown, was an extremely challenging structure that could not have been built without the help of Tekla software.

Of the ten arenas that were used for the 2010 FIFA World Cup, three were modelled using Tekla Structures 3D Building Information Modelling software. A total of five completely new stadiums were built for the World Cup. Two of them, the Mbombela Stadium in Nelspruit and the Nelson Mandela Bay Stadium in Port Elizabeth were modelled using Tekla Structures. In addition, the modelling of the Royal Bafokeng Stadium in Rustenburg, renovated for the World Cup, was made with Tekla software.

“The Cup stadiums are large and structurally challenging buildings in which attention has been paid to appearance. Building them without the help of 3D BIM software would have been very difficult,” says Risto Räty, Executive vice-president of Tekla Corporation.

The Nelson Mandela Bay Stadium in Port Elizabeth really stands out thanks to its fantastic roof structure. Completed this year, the stadium was one of the main stages of the World Cup. In addition to the group-level matches, Brazil suffered a shocking quarter-final defeat there at the hands of the Netherlands.

The individually shaped white roof structure, made of Teflon-coated fibreglass, is held up with 36 steel girders. The total weight of the curved beams supporting the futuristic structure is nearly 2,500 tons.

“One of the most interesting parts of the project was the compression ring. To make the 3D model, we had to duplicate the model and simulate the deflection so the compression ring could be fitted properly after the girders erection,” says Daniel Barbeau at Canadian steel detailers CadMax, who was responsible for information modelling. 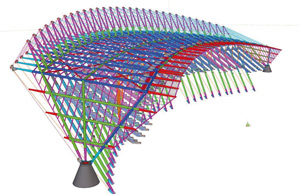 The Southern African Institute of Steel Construction picked the renovation of the Royal Bafokeng Stadium as the winner of its Technical Excellence category. The third stadium modelled using Tekla Structures was the Mbombela Stadium in Nelspruit, completed last year for the event.

The complex nature of the structure put CadMax, and Tekla Structures software, to the test. Seamless co-ordination of the 4,200 drawings required for the erection of the stadium between project parties was an additional spice in the job.

Membrane designer and connections engineer Birdair was located in Buffalo USA, the steel detailers of CadMax were in Québec, Canada, the part manufacturers in Kuwait, the structural engineers in Germany, and the contractors in South Africa. Despite the tight schedule, the stadium was completed last summer.

The CISC (Canadian Institute of Steel Construction) in Québec awarded CadMax’s modelling of the steel structure of the Nelson Mandela Bay Stadium as the best project in 2009 outside of Québec.

Tekla Structures was also used in the renovation of the 44,530-seat Royal Bafokeng stadium, named after the Bafokeng people who live in the area. South African company Pinnacle Projects was responsible for the modelling.

The same information model was used both in steel shops and the site, according to Tommy Mulherron of Pinnacle Projects. In addition, through the information model the project management was always up to date with the progress of the work.

It was modelled by the South African company Mondo Cané, a user of the Tekla Structures software since 1999. The Web Viewer model it created was used by architects, detailers as well as fabricators.

The steel structure of the stadium weighs approximately 1,500 tons and 90% of the super structure was made from tubular sections that required accurate profiling. “The project was split between two fabricators so we separated the model into various phases and assigned different assembly marks per phase. We used cloning effectively to reduce the amount of work”, says Rob Chalmers who was responsible for detail design and workshop drawings.

The word ‘mbombela’ literally means many people together in a small space’ in local SiSwasi language, so it was fitting that the capacity of the Mbombela stadium is 43,589 people.

The FIFA World Cup stadiums are not the first sports arenas modelled using Tekla software. For instance, the Bird’s Nest stadium built as the main arena for the Beijing Olympics two years ago, and the Wembley Stadium renewed in 2007 in London, were both modelled using Tekla Structures.