There has been a new Open Letter to Autodesk, this time from the Danish, Norwegian, Finnish and Icelandic Architectural Associations, which represent 14,000 architects. The letter comes with a supporting message from the Architects Council of Europe — a body composed of 43 representative organisations based in the EU, Switzerland and Norway, representing over 600,000 architects.

The letter is reproduced in full below

Two years ago, 25 firms based in the UK and Australia, released an Open Letter to Autodesk highlighting their frustrations with years of lacklustre development of Revit, Autodesk’s changing license models, increased costs, punitive non-compliance business practices and a lack of interoperability between Autodesk’s own applications and poor support for IFC. The Letter was put online and any firm that agreed with the contents could sign. In the end over 200 firms got board-level approval to sign, as well as one huge construction association which covered Brazil.

The Open Letter generated a lot of global coverage and Autodesk agreed to engage with the letter writers to have a listening session with the executive team and then, over the subsequent two years on going, occasional engagement with the Revit development team.

The first ‘open letter’ came from customers, mainly in the UK. This new ‘open letter’ comes from associations representing entire countries. The support from the Architects Council of Europe escalates the issue to the size of tectonic plates.

The Open Letter resulted in some changes. The Revit team started hiring programmers and, in the last release a load of features were enhanced or added, addressing issues which had been outstanding for years. However, the firms complaining were mature customers who wanted fundamental core improvements like multi-core CPU support and improved reliability. The enhancements delivered were the low-hanging fruit. Some complaints were ignored completely.

Further reading: Two years on from the original “Open Letter to Autodesk” how well do the signatories feel Autodesk has done in meeting their requests?

Simultaneously, another group of 10+ globally renowned ‘signature’ architects approached Autodesk without an open letter but with a similar list of gripes and were also engaged in talks with the Revit team. They went through the exact same process as the ‘Open Letter’ group and were demanding core-level changes or a complete re-write of the twenty year old Revit code.

Having seen Autodesk spend billions on acquiring PDF document distribution services for Autodesk Construction Cloud, the lack of development of Revit, given the huge income from Autodesk’s AEC Suites, deeply concerned them.

From talking to many IT design directors involved in the last two years of talks, they feel their investment in Revit could now be a dead end. This feeling has now been taken up by the Nordic Architectural Associations. What is the future of Revit?

The Nordic Associations want to see real action on core BIM development. An insight into the long-term roadmap of Autodesk’s BIM products, performance improvements and a prioritisation for the ground-up replacement of Revit to bring it into the modern software era.

Cost stability, license predictability and tools for better license management are also key asks of the Nordic Open Letter writers. Many firms are having to deal with multiple licences on different licence models and design IT managers are spending far too much time allocating licences, while fearing accidental non-compliance and fines.

The first ‘open letter’ came from customers, mainly in the UK. This new ‘open letter’ comes from associations representing entire countries. The support from the Architects Council of Europe escalates the issue to the size of tectonic plate.

Autodesk needs to address the future of Revit beyond a short-term roadmap. As Autodesk has been clear, its future applications are in the cloud with Autodesk Forge. Will Revit be rewritten or replaced? Mature Revit customers who have invested decades of time and money have the right to clear answers. Autodesk needs to quickly learn how to properly engage with and listen to its high-end architectural customers.

Read the Nordic Letter in full

Read our analysis of what this means for Autodesk, AEC firms and the software industry 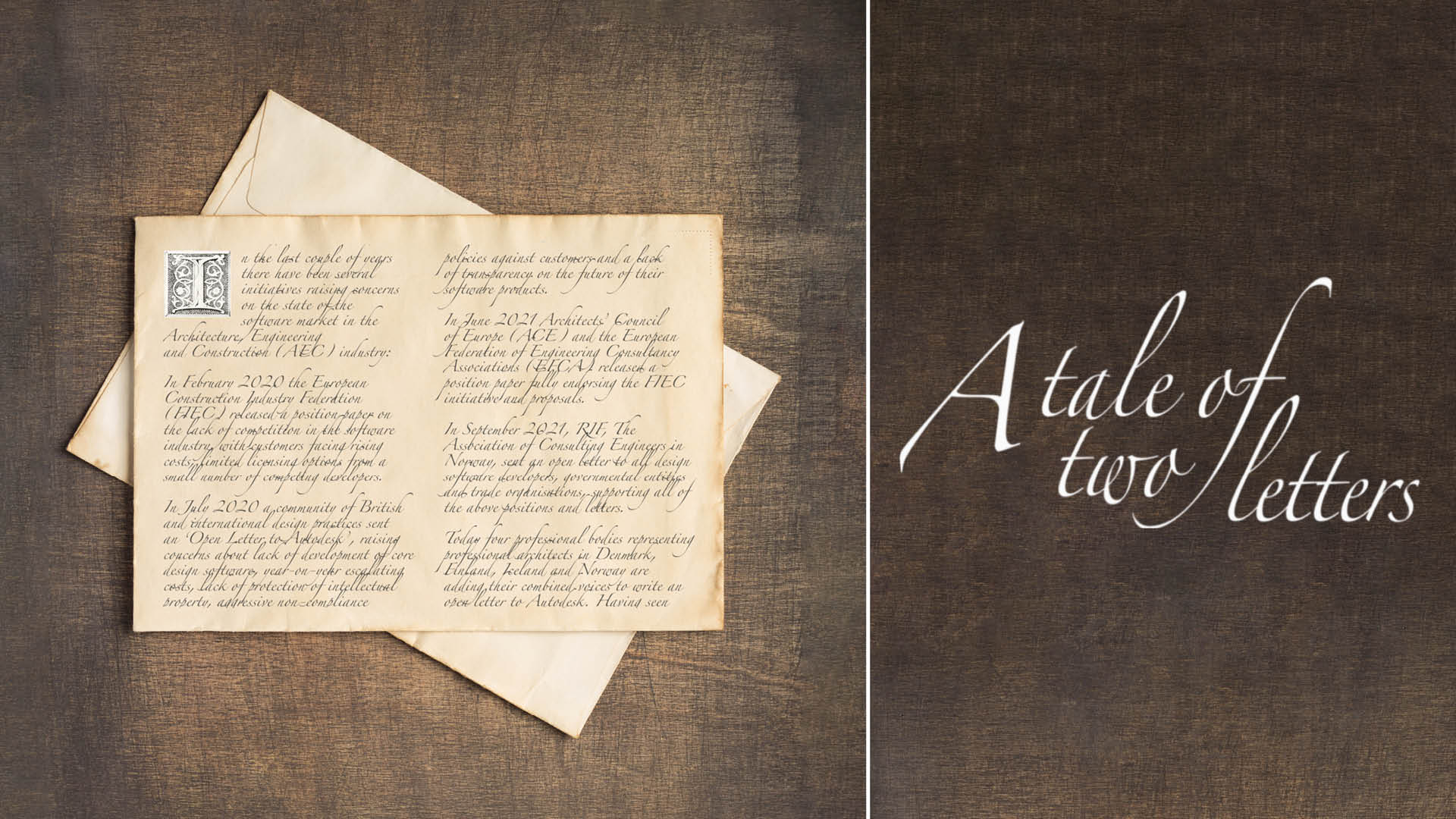 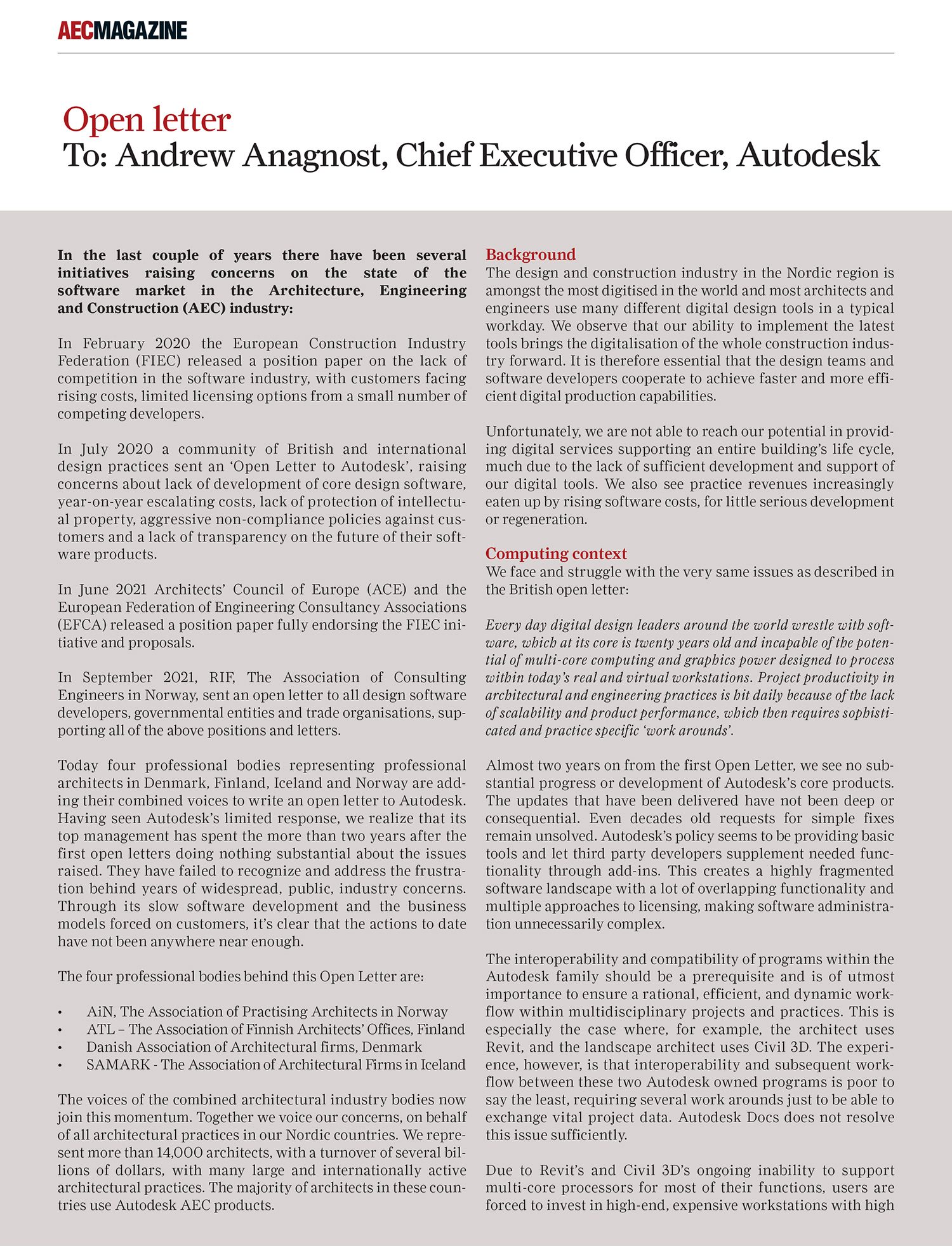 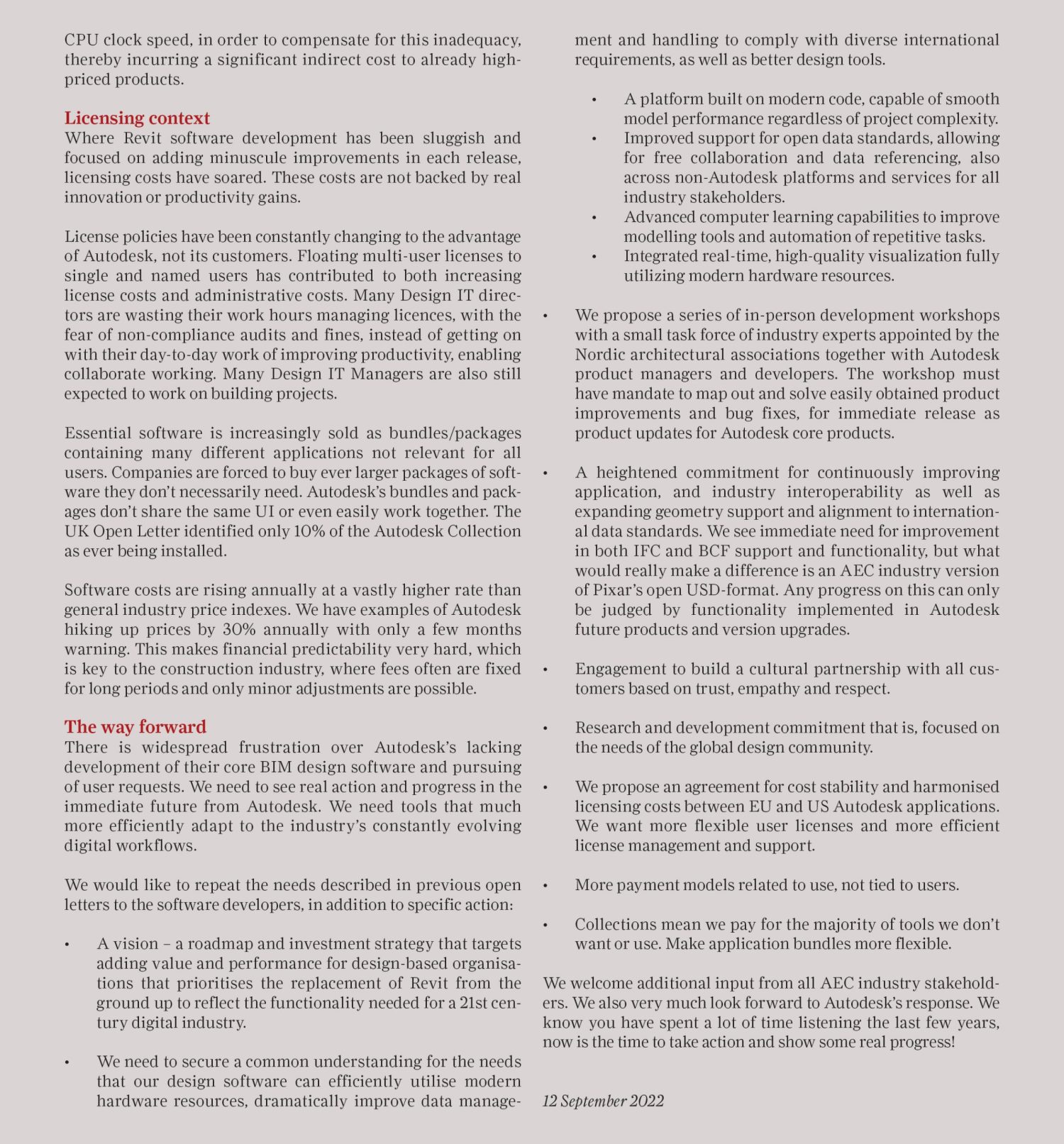