The Marina Bayfront Pedestrian Bridge in Singapore features a double-helix to replicate the designersÝ vision of walking through a DNA molecule. The creation of this complex form was made possible with the help of BentleyÝs unique generative design software, GenerativeComponents (GC).

Arup, a leading global design and business consulting firm, knew from the beginning that completing the Marina Bayfront Pedestrian Bridge design project in Singapore would require innovative technology. The 280-metre-long bridge features a double-helix exoskeleton constructed from stainless steel to support a 6-metre-wide deck spanning 65 metres between piers. When it opens in 2009, the bridge will replicate for pedestrians crossing it the designersÝ vision of walking through a DNA molecule.

A string of computer-controlled lights along each helix will turn the bridge into an active element during evening fireworks displays and light shows. These multicolored lights are designed to mimic the chemical processes found in DNA replication.

What enabled the designers to pursue this inspired design was GenerativeComponents (GC) ± BentleyÝs unique generative design software that captures and exploits the critical relationships between design intent and geometry. GC allows architects and engineers to quickly explore a broad range of ýwhat-if¯ alternatives for even the most complex structures.

The Marina Bayfront Pedestrian Bridge project presented the type of design challenge for which GCÝs capabilities are well suited. The bridgeÝs DNA-inspired double-helix structural support mechanism is fundamentally unique. Unlike the Golden Gate Bridge in San Francisco and Millennium Bridge in London, which though different in appearance utilize conventional structural systems, the Marina Bayfront Bridge doesnÝt belong to any tried-and-tested bridge type.

Moreover, as an aerial view shows, the bridgeÝs centreline adapts to the site geometry, with the bridge curving in plan while simultaneously rising to a high point in the centre to create a shipping lane. Incorporating the plan curve and vertical geometry within the constraints of the helix rhythm required complex geometry. To understand that geometry and create the necessary drawings to accurately estimate construction costs and coordinate the design between engineering analysis and documentation, Arup needed an innovative 3D modeling solution.

ýThe main challenge that impacted our ability to coordinate the geometry was associated with finalizing the bridge centreline,¯ said Greg Killen, senior associate in ArupÝs Brisbane office and design manager of the Marina Bayfront Pedestrian Bridge. ýUltimately, it became a delicate balancing act to provide sufficient clearance for the shipping lane, as well as a gentle slope to move pedestrians comfortably along the bridge. We also needed to create a link to a nearby vehicle bridge, allow pedestrians to pass under the bridge at each abutment, and facilitate supports close to existing bridge supports to reduce the impact on ships navigating the bay.¯ 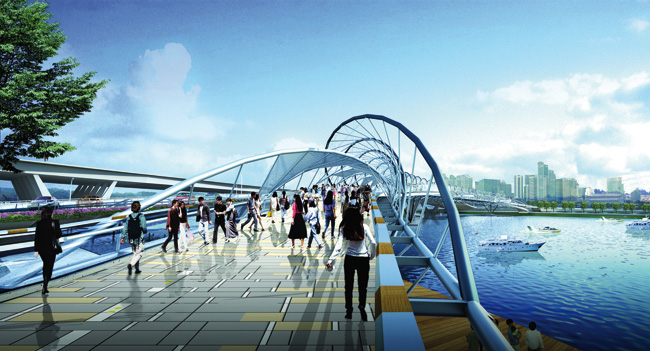 The design team also understood that any project constructed around complex, nonrepetitive geometry often attracts premium pricing during the tender process. To avoid this, the Arup team deployed sophisticated geometric analysis to rationalise portions of the structure. By using BentleyÝs integrated software applications, Arup was able to take advantage of streamlined collaborative workflows that increased the efficiency and productivity of its project teams. For example, by deploying GenerativeComponents, the team could begin modelling the complex helix exoskeleton, even while finalizing the critical bridge centreline geometry, fully confident that the design could accommodate any late changes.

By associating this flexible model with the new design centreline, Arup was able to regenerate a complete complex geometry model of the bridge in minutes. The team then imported the wireframe into the main structural analysis and design software applications. Once the structured analysis was complete, Arup used the model in Bentley Structural, BentleyÝs advanced Building Information Modeling (BIM) application.

This 3D model was then used to prepare fully coordinated drawings. To ensure the structural analysis and design stayed in sync, Arup then returned a post-processed version of the model to the analysis program. MicroStationÝs support for industry file and data standards, as well as connecting the geometry with the analysis engine, greatly enhanced this process. By using MicroStationÝs Visual Basic macro capabilities to generate Excel spreadsheets, Arup statistically analyzed the component geometry to develop new curve geometry that used one bend radius for each of the two spirals that formed the double helix. This increased bending speed and reduced the waste associated with the cold-bending process, which saved on stainless steel costs.

Arup then combined the structural analysis results with the Bentley Structural model by using the ÙPlace Member along PathÝ tool to quickly regenerate a 3D solid model. Combining this with the BIM drawing production technology allowed Arup to quickly and accurately create as many drawings as necessary to describe the complex design. With the structural design in hand, Arup could turn its attention to designing the glazing panels that form the bridge canopy. Arup again modified the GenerativeComponents model to include the design teamÝs intent for the complex panel arrangement.

Initially, the Arup team was concerned that once it had completed the helix rationalization, the complex arrangement of panels and the bridge geometry would result in the panels being of unique size. However, using the Visual Basic capabilities Arup was able to populate a spreadsheet of the panel geometries for analysis. This proved that for a given tolerance ± of about 2 to 3 millimetrets ± the panels could be grouped into sizes that, for fabrication purposes, could be considered the same, which significantly reduced glazing costs. The design team knew that it could reduce fabrication costs by representing the double-curved helix geometry with a series of single-curved (planar) segments.

Since GenerativeComponents allowed the Arup team to recognize, and have more control over, geometric parameters, it was able to investigate design ideas more quickly. For example, through GenerativeComponents Arup discovered it could reduce the weight of the bridge by using a fifth less steel than is generally required to construct a conventional box girder structure.

In addition to facilitating the geometry coordination, Bentley BIM in conjunction with GC allowed Arup to identify sets of repetitive components with the complex spiraling geometry. Moreover, GC enabled the Arup design team to model the complex detail geometry before finalizing the over site geometry. The time-saving flexible modelling technology within GC enabled Arup to update the geometry in minutes rather than hours. This ability allowed the team to make changes and explore options they could not have imagined.

Without deploying Bentley products on the Marina Bayfront Pedestrian Bridge, achieving this design would have required using expensive software, a dedicated 3D graphics programmer, and considerably more time, which would have added costs for the client, SingaporeÝs Urban Redevelopment Authority.

For Arup, Bentley products formed the back bone of its design, analysis, engineering, and documentation processes. The products provided the power and flexibility required to successfully complete complex projects, while maintaining construction schedules and holding the line on costs in the process.