It’s not often a workstation comes along that makes people sit up and pay attention. The Z Series from HP is not only incredibly fast, but looks sleek and offers customers new levels of serviceability. Greg Corke gives his first impressions.

HP’s new workstation family, the Z Series is something to get quite excited about. This is not just because it features Intel’s new, incredibly powerful, Xeon 5500 series processors, but because HP has completely re-thought the workstation and the way it can be serviced, upgraded and generally taken to bits. To my mind, only Apple and Sun have delivered similar levels of serviceability by those offered in HP’s new Z series, which is completely tool-less in design. This was demonstrated at the launch of the new workstations, where HP showed just how easy they were to service and maintain, starting with the flagship Z800.

With its tool-less design HP’s New Z800 workstation can be taken to bits in minutes.

The whole system relies on clearly marked green levers and clips to give users visual clues as to how to take things apart. HP has done this before but never to this level of simplicity. First of all there are no wires inside the machine! These are all routed behind the back of the motherboard ù not only to make things easier, but not to interfere with the Computational Fluid Dynamics (CFD) ù optimised airflow throughout the machine. Even the dongles used to power high-end graphics cards, such as the Quadro FX 5800, are routed behind the motherboard and neatly clipped away when not in use.

Everything in the system, from graphics cards to hard drives (and even motherboard), feature innovative mechanisms for easy and tool-less removal. Components that rely on direct electricity, such as the power supply and memory fans, use blind mate connectors, which are funnel-shaped to guide the components into place.

The power supply itself has been completely redesigned, and runs the whole length of the chassis so it can take in cool air from the front of the machine and as a result generate less fan noise. User maintenance and diagnosis has also been improved and should the workstation develop a power problem the supply unit can be removed simply by pulling it out by its handle. Then plugging it into the mains will help the user verify the cause of the problem. If the supply is indeed faulty the green light on the side of the unit will not come on. HP will then ship out a replacement power supply which can be easily installed by the user. 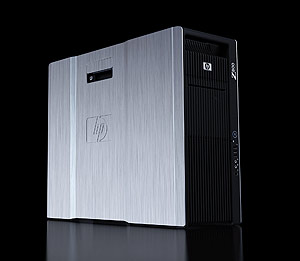 In its quest for even quieter machines HP has also innovated in its cooling mechanisms. Specially designed injection moulded ducting means each CPU in a dual socket machine receives fresh air from the front of the workstation reducing the load and improving acoustics. Dedicated fans for each memory bank also run independently from each other to minimise noise.

For those craving even fewer decibels, a liquid cooling option will be available soon and new Intel solid state hard drives, which not only run quieter than traditional physical drives, but consume less power and produce less heat, will also be introduced. These will increase performance when accessing a lot of data, frequently.

The Z400 is a single socket machine taking the price/performance position in the range (though HP will continue to produce its Core 2 Duo-based xw4600 for an even lower entry point). The Z600 is a compact dual socket workstation, but for ultimate expandability the Z800 offers up to 192GB RAM and 7.5TB of storage. All workstations are armed with 1,333MHz DDR-3 memory and new professional graphics solutions have been introduced across the line. These include Nvidia’s Quadro FX380, FX580, FX1800, and FX3800, which join the established FX4800, and FX5800 in the high-end machines. The choice of AMD graphics cards has also been expanded over previous generation workstation families with the ATI FirePro V3700, V5700 and V7750 all offered as standard options.

HP has made some bold statements about power, claiming that on average its new workstations consume 35 percent less power than similarly configured machines in its previous generation. In terms of power efficiency, all of its power supplies now surpass the 80plus initiative and are now 85 percent efficient. The redesigned 1,100W unit in the Z800 is even 89 percent efficient.

HP has also done a lot of work on power saving and a new hibernate mode called HP WattSaver reduces power consumption to 0.8W, compared to the 2.1W in its previous generation workstations.

HP engaged BMW DesignWorks as part of its industrial design team and to do the global customer research into what its customers want from workstations. In addition to the totally tool-less design to transform the way users re-configure systems, the Z600 and Z800 feature integrated handles making it easier to move them around on site. Also, because the workstations don’t have rubber feet, they can be slid around on carpets and tiled floors.

Styling was also high on the agenda and the ædesign language’ developed by DesignWorks expresses clean lines and premium materials. The grill that runs down the entire front of the Z600 and Z800 was made possible by incorporating a slot loading optical drive and brushed aluminium side panels also feature. Finally, with its injection moulded components, the machine also looks elegant from the inside, as opposed to the usual mess of wires and clips.

With the introduction of the new Xeon 5500 Series, it’s an exciting time for workstations in general, because performance is about to go through the roof, particularly when users are multitasking or running multithreaded applications like 3ds Max.

However, while this level of performance will be seen across new product introductions from all the major workstation vendors, what makes HP stand out from the crowd at this moment in time is its innovative approach to chassis design, which looks set to make the servicing of workstation an absolute breeze. We’ll be putting the new workstations through their paces in the coming months, so stay tuned.