Graphisoft is celebrating 30 years of ArchiCAD BIM in 2014. After launching its BIM Cloud offering earlier in the year, the Hungarian company has released version 18 of its flagship Building Information Modelling (BIM) platform

The CineRender engine uses a progressive renderer, which starts out blocky and refines with each pass

Who invented Building Information Modelling (BIM)? The answer depends on what you mean by BIM.

The term was popularised and adopted first by Autodesk in its product Revit, which it acquired in 2002, and which had been originally launched in 2000 by Revit Technology Corporation (RTC). And yet Hungarian-based Graphisoft launched ArchiCAD in 1984 and was already at version 7 when Revit appeared on the scene.

At the time Graphisoft referred to its Mac and Windows-based 2D and 3D architectural modelling solution as ‘Virtual Building’ software before the term BIM had been coined. And given that mainframe-based 2D/3D systems such as BDS, GDS, Sonata and RUCAPS were developed in the early 1980s, ArchiCAD was in fact the first desktop BIM system.

This is an even more astonishing achievement given that its chief architect, Gábor Bojár, lived Hungary and had to smuggle in Apple Lisa computers to write the application. The 30-year milestone is certainly a testament to Mr Bojár’s original vision, that architects may, one day, benefit from modelling their projects in 3D on a personal computer. That future is definitely here and now.

Graphisoft is as regular as clockwork with its yearly subscriber releases and, as usual, offers a whole host of additional functionality around its development themes.

This year’s theme is creative flow and I would suggest the firm has delivered the most compelling update ever. Before delving into the new functionality, there was one difference this year and that was the announcement in Tokyo of the BIM Cloud technology that extends existing BIM servers beyond the firewall, to use the cloud as a seamless way to connect geographically disparate teams. BIM models are granular so only edits and new components (commonly called the delta, i.e. the differences) are sent lowering the required bandwidth.

The solution also offers project, user and role management, together with distribution to mobile apps that may be used on-site (Read more in the May / June 2014 edition of AEC).

For me, the most obvious and impressive addition to ArchiCAD 18 is the inclusion and integration of a version of Maxon Cinema4D. This alone is worth approximately £1,500, so an easily identifiable return on a yearly subscription. I have always wondered why there has been very little cross-product integration within Graphisoft’s brands including Nemetschek, Allplan, Vectorworks, Scia and others, especially with Autodesk shoving everything and the kitchen sink in its Suites.

I can now stop thinking that! Pretty much the whole of Cinema4D with the CineRender engine has been included. The only things missing are the features more aimed at cinema special effects. The software takes full advantage of a machine’s multi-processing capabilities (following on from last year’s release), leading to shorter rendering times, while leaving users free to carry on modelling.

The renderer supports High Dynamic Range Images (HDRI) for more realistic environments. If you just want a sky, the software includes a clever procedural generator that creates realistic skies based on longitude, latitude, time of year and hour of the day.

There is also ‘physical’ set up capability that those familiar with proper DSLR cameras will love, over abstract rendering parameters. Maxon and Graphisoft have created a range of one click palettes. Once experience has been gained in playing with all the many settings, it is possible to create your own palettes and save them.

My favourite out of the box setting is the ‘white model’ effect, which applies a template to make models look like cardboard models — they really do look like architectural models, including shadows.

The CineRender engine uses a progressive renderer, which starts out blocky and refines with each pass. This is usually good enough to work out if everything is rendering as you would expect. If not, stop it, amend the settings and start it off again. The software comes with support for Illuminating Engineering Society of North America (IES) settings. There is a library of preconfigured lights, and IES data can be imported from manufacturers’ websites to drive realistic lighting scenarios.

Materials are also provided for surfaces and can be edited.

Component creation and editing has been enhanced to allow for multiple elements to be selected and edited simultaneously. Editing can be pulling / dragging nodes of all polygon-based elements or cutting holes or adding shapes.

This way it is easy to punch a hole through four floors simultaneously. Direct manipulation feedback is provided visually by animated wireframe. The feature does not work on elements that have undergone Morph or Shell commands.

ArchiCAD now properly displays transparent building materials in air gaps when rendered, making the representation more accurate. Air gaps have also been made optional in clash detection phases, enabling ductwork in air gaps / skins not to be flagged up as a clash if they are in actual fact intended to be in building voids.

This capability is carried through into Industry Foundation Classes (IFC) files too. With an eye on improving Total Life Cycle energy analysis, the Building materials properties has been expanded to include ID, Description and Manufacturer, as well as additional physical properties, namely embodied energy and embodied carbon.

An increase in Complex Morph performance

PDF has been enhanced, with optimised export, smaller file sizes and better import of PDF into ArchiCAD.

ArchiCAD now exports visible layers to PDF, allowing show / hide navigation in the PDF file. There are a number of image compression options to reduce the resulting PDF file as well as support for the embedding of 3D content on Mac and Windows versions. When imported, ArchiCAD will also support any layering within the PDF.

Graphical elements can be exploded and edited with full control over any incoming pen / plotter settings in the imported file. XREF management has been revisited. It is possible to break all the hotlinks and XREFs to ensure that the linked data becomes part of the project. Similarly, single instances of a hotlink module can be relinked.

Graphisoft says this could be used to display different room layouts to show alternate layouts. Mark-up comment interface has been revamped with status and style information. Mark-ups can now be made in 3D views as well as Floor Plan mode. 3D views with cutting planes and camera views can be saved as mark-up entries.

Screenshots can be saved to the mark up palette and all mark-up data can be exported in the BCF file format (BIM Collaboration Format) for external consultants.

The BIM Server Manager is now browser-based, and automatically installed with the BIM Server.

Set up is now via the IP address of the server and can be done from a phone or a tablet. Users can also log in to access project activities, which are permission-controlled of course.

Messaging has had a number of enhancements to smooth participant interaction. There is new element reservation logic for views and layouts to eliminate the possibility of data conflict when working on a shared model, should multiple users try to move elements simultaneously as well as updates to hotlink reservation and group feedback on renaming.

Graphisoft is an active member of the buildingSMART organisation (buildingsmart.org), and has adopted its BCF format for sharing BIM mark ups. The format is intended as a way to share clashes and comments in 3D. ArchiCAD keeps track of BCF elements’ IFC global IDs through multiple merge cycles. 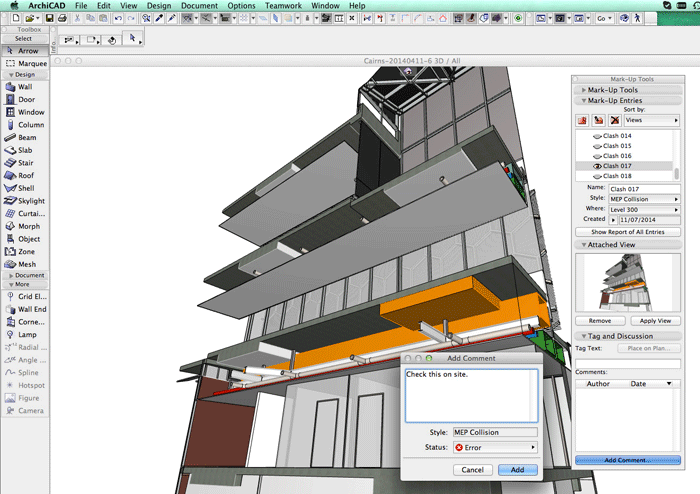 Graphisoft is an active member of the buildingSMART organisation (buildingsmart.org), and has adopted its BCF format for sharing BIM mark ups

All IFC text, label , space and logical type (column, wall, window) can be extracted from ArchiCAD element properties and Interactive Element Schedule data. IFC data tags and category information can also be displayed on any ArchiCAD element. The end-user has exceptional control of IFC output through filters.

There is also a new scheme management interface for editing and the production of custom schemes. There is a selection of commonly used schemes (IFC 2×3 Coordination View 2.0, COBie etc).

Graphisoft has also updated the bi-directional connection kit for Autodesk Revit to work with 2015 (Architecture, Structure and MEP).

There is a range of new objects covering laboratory, workstation, school, nursery furniture, lamps and lights (with an array of light sources).

Trees have been revamped with a host of new 2D elements, which are organised in self explanatory groupings. The 3D tree object has been consolidated into a single tree object, which can generate a wide variety of tree types. There have been enhancements to the interface of the library function, simplifying the layout, while providing more control.

Complex windows with multiple sashes can also now be created. Revision management The management of documentation revisions gets a new feature set, which tracks model changes on all impacted layouts, enabling the definition and control of changes with subsequent layout revisions over the project lifetime. 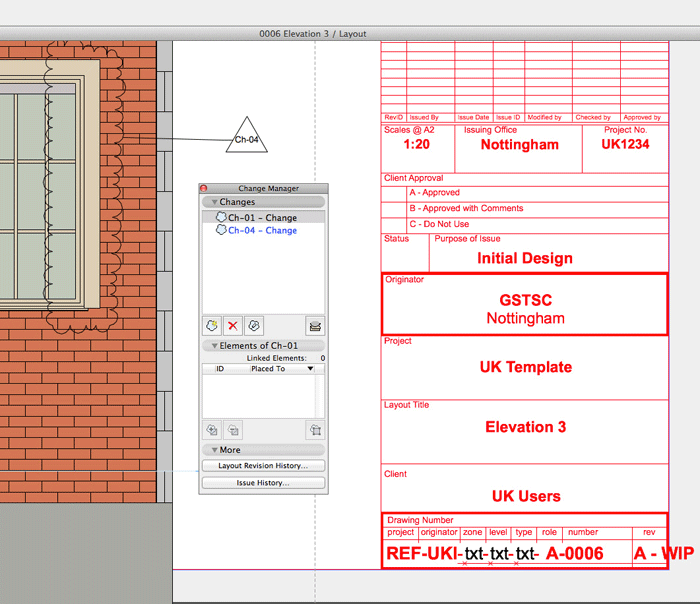 The management of documentation revisions gets a new feature set, which tracks model changes on all impacted layouts

Changes are added to the revision automatically and can be seen in the Change Manager control. Colour codes show which layouts have new revisions pending and which are current. It is possible to create Change List, Issue List and Transmittal Report with one click.

ArchiCAD 18 comes with a great big dollop of new functionality, with many small and incremental improvements along the way. I would have thought most architects render their BIM models at some point, so this is a release to appeal to the masses — that is unless you already own Cinema4D.

The results I have seen so far further blur the lines between a photograph and an ArchiCAD rendering. Important work has been done to IFCs, especially with the UK Government’s BIM mandate looming ever larger.

Graphisoft has always been at the heart of promoting IFCs and is ensuring that its modeller is an exceedingly capable IFC creation and export platform. In its collaboration strategy and use of the cloud Graphisoft has something very different to talk to potential clients about. While Autodesk has Skyscraper in beta, BIM Cloud, BIM Server and Teamwork are a demonstrable differentiator for the Hungarian developer. Oh and Happy Birthday.