Using multiphysics simulation to understand the interaction between environmental, geometrical, and structural variables, engineers at Newtecnic ensure that innovative building façades are both beautiful and buildable

Rendering of a single shell shown from two different angles, many of which will be part of the building.

Bespoke is the norm for these iconic building projects and each one requires thinking that goes beyond conceptual design alone. Architects provide an artistic view and perhaps surface modelling of a building design, then engineers build up the façade in layers, making sure that the design retains its creativity while also ensuring its structural integrity.

“A key aspect of our work is to describe the physical behaviour of the façade systems we design,” explains Carmelo Galante, head of research and development at Newtecnic.

From solar studies that allow optimisation of the shading design in order to reduce cooling loads and maximise visual comfort, to the way in which fixing brackets for rainscreen cladding affect the integrity of the insulation, there are numerous challenges that can be resolved with the help of simulation.

Highlighted view of the rainscreen system with fixing brackets.

Newtecnic uses Comsol Multiphysics for its façade design and analysis work. It is used to study the 3D thermal bridging effect — the way in which highly conductive materials penetrate insulation — on the overall energy efficiency of the build-up, evaluate the maximum temperature of components, and suggest the most suitable product or material. “I can evaluate cladding pressures on the building structure for schematic design stages and study more complex façades in which mechanical and natural ventilation are present at the same time. I can evaluate how different design configurations would affect the hygrothermal performance of a façade system,” says Mr Galante. 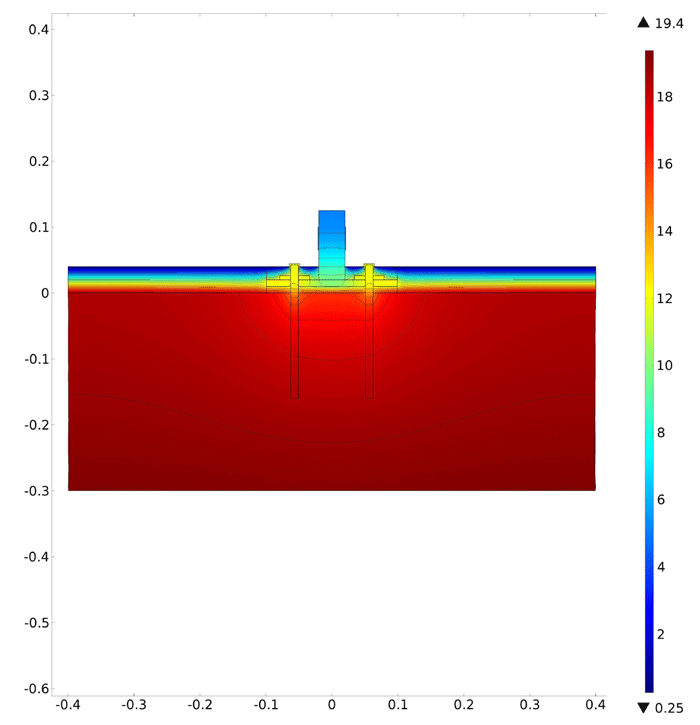 Simulation results showing isotherms and temperature profile in oC of a section taken through a bracket.

Mr Galante imports complex geometries from Autodesk AutoCAD and Rhino. Autodesk Revit is being used more and more at Newtecnic, including a new add-on that allows users to interface Comsol simulations with the Revit environment. Galante also combines the use of simulation with parametric design tools, such as the programming language Grasshopper, which is used to build and analyse complex geometries by means of generative algorithms.

A current project involves designing the façade system for a high-profile private building comprising a series of self-supporting concrete shells ranging from 10m to 80m in length and reaching heights of up to 30m.

The concrete shells are clad with a rainscreen façade system made out of ceramic panels that are doubly curved in order to accurately reproduce the building geometry. Each panel is supported at its corners by adjustable fixing brackets made out of stainless steel. The brackets are attached to the concrete structure through four post-drilled anchorages. As the brackets penetrate the insulation layer and have a much higher thermal conductivity than the concrete structure, they create thermal bridges through the façade envelope, significantly reducing its thermal performance.

By conducting a simplified 2D simulation study, engineers were able to look at how the thermal bridge effect created by the brackets influenced the temperature distribution in the façade. The results from the simulation were entered into a Grasshopper script to evaluate three areas of interest: those influenced by one bracket, those influenced by two or more brackets, and those not influenced at all. 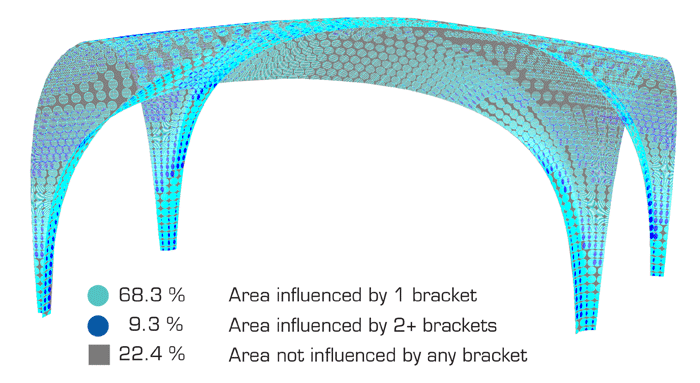 Model of one of the shells with areas highlighted that are influenced by one bracket, two brackets, or not influenced by any bracket.

Engineers were then able to prepare an accurate geometry for the system, including all the components of the build-up. “It is a real advantage to be able to combine two tools,” says Mr Galante. “Grasshopper allows me to investigate the geometry on a very large scale — that of the entire building — then I move back to the simulation software with this information and create a detailed 3D model to capture the real physics of the system.”

Using this approach, engineers could conduct a 3D analysis to study the thermal bridge effect in the bracket and surrounding building and compute the global heat transfer coefficient (U-value) of the façade.

“Using multiphysics simulation allows me to develop a better understanding of the real situation,” explains Mr Galante. “I can combine fluid flow with heat transfer by conduction, convection, and radiation, meaning that I can thoroughly evaluate the interplay of different physical effects and confirm the performance of different structures and materials.”

Newtecnic’s engineers have to respond to continually changing designs, and need to be able to validate any design updates. “Simulation allows us to do that,” observes Galante. “We can demonstrate exactly what effect a design change will have, whether it relates, for example, to energy efficiency, structural performance, corrosion, or the lifecycle of a component.”

For Newtecnic director Andrew Watts, it is all about answering questions such as “Is it worth changing this to make something else work?” or “If we have to change it, how much do we have to change it by?” He comments: “With simulation, we can move away from the traditional building philosophy of studying individual components that only perform one function and can instead think in terms of multi-functional components, and of the building as a whole.”

Simulation is used to conduct analyses for every component of a building, and these results are fully integrated with drawings so that budget estimates are both clear and comprehensive. Fabio Micoli, associate director at Newtecnic, notes the value of delivering live feedback to clients.

“Simulation minimises construction costs by allowing contractors to see exactly what they are required to build, thereby reducing the need for contingency budgets or time for unresolved design issues and allowing the construction team to concentrate on meeting project deadlines.”

“The digital tools that we use, such as simulation software, enable us to explore new possibilities and improve our design processes,” Mr Galante says. He can see potential for expanding the use of simulation in the organisation, including using the new Application Builder, part of Comsol Multiphysics version 5.0.

As Mr Micoli notes, “We could, for example, enhance communication with clients by creating an application that allows an architect to modify different parametres and see exactly how changes would affect their design without knowing the underlying multiphysics simulation details.”

With simulation, a better understanding of building performance can be delivered, ensuring that an innovative architectural design puts its best face forward.