NC Architects’ pushes the boundaries with its vision of building information modelling.

Derek Marshall, a Director of NC Architects (NCA) says: “If you look at the way most of the building industry works at the moment, it is very fragmented. This downturn is an opportunity for us to take stock and consider better ways to do things leaving us fitter and more efficient.”

There are many evangelists of progress and change voicing their views at the moment, but few with as much commitment and vision as Mr Marshall and his colleagues. As an early adopter of Revit Architecture, the firm has already reaped the benefits of Building Information Modelling (BIM) on a string of projects, including housing developments, car showrooms, hotels, medical and sports centres.

This 3D aerial view, rendered in Revit, is a Swindon scheme for Bellway PLC, currently in for planning consent.

Not content to rest on his laurels, Mr Marshall is now investigating new ways to push the boundaries further. For example, he is currently looking at how to use Autodesk Inventor, a digital 3D solution for the manufacturing industry, within the Revit building model.

Inventor will provide precise 3D digital detail of building components and assemblies, which can be manipulated and interrogated by those further downstream and even on site, reducing errors and saving time throughout the entire design/build process.

He is also planning to use Autodesk’s new industry-focused version of its visualisation tool, 3ds Max Design to help enhance the communication of their designs between project team members and clients. “I am determined to lead the company into a new era of total 3D virtual design,” he says.

At first glance, NC Architects appears to be one of those well-established, small-sized practices that form the backbone of the UK profession. Like every firm working in the house building sector, it has had to steel itself against the icy winds of recession over the past twelve months. However, having survived earlier downturns, such as that of the 1990s, it has been canny enough to spread its reach across several areas including healthcare — and this policy is helping it ride the storm.

However, a closer look reveals a firm that, despite its 30-year pedigree, is not afraid to make radical decisions to ensure it remains ahead of the competition. While many operations of its kind are still debating the benefits of 3D design, NC Architects has already proved them and is looking at the next steps.

It is a journey that for Mr Marshall began almost a decade ago, before Revit was even part of the Autodesk family. “After a cold call one day we agreed to a demonstration. At the time you could rent the software by the month, so much has moved on since then. However, even then I thought ‘this is a whole generation ahead of anything else I have seen’,” he says.

At the time, NC Architects was not in a position to invest. But Mr Marshall kept a close eye on Revit, as the practice was using ArchiCAD and experimenting with Autodesk’s Architectural Desktop, now AutoCAD Architecture, for its outline 3D work.

Luckily the push to commit to total 3D design coincided with Autodesk’s acquisition of Revit. “Although I was impressed with Revit before, this clinched the decision. I knew that Autodesk would invest in the technology and it was definitely here to stay.

“Revit was simply a far more elegant solution and the Autodesk backing meant we all had more confidence in committing to the product.”

Using Revit, NC Architects has been able to build on its reputation in the residential, commercial and community areas. But it has taken a change of mindset from the start. “It has been a culture shock. We have had to change our workflow and get used to the fact that you have to make design decisions earlier – you just can not fudge anything and think you will sort it out later down the line,” says Mr Marshall.

Yet, converting NC Architects staff to BIM has only been the start. One of the disadvantages of being ahead of the curve is that partners, suppliers and even clients sometimes need to be persuaded out of their comfort zone. 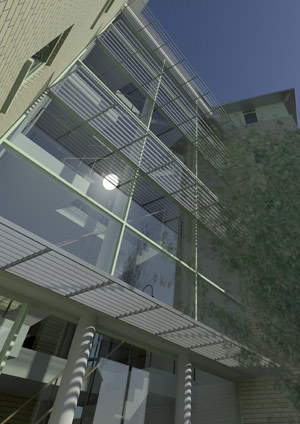 This entrance feature was created for the front cover of a planning document for clients Carey PLC.

“We have distinct ideas about where we want to go. But one of our biggest challenges is that often contractors, trades people and clients are in a different lane,” he says.

But true to form, Mr Marshall and his team have been incredibly enterprising in addressing this challenge too, holding open days and roadshows to explain this new way of working to all concerned. “We came to recognise that we needed to speak not to our direct contacts but to the managing directors and CEOs as working this way demands fundamental changes.

“At the moment the whole industry is split into different silos; planning, estimating, sales and so on and work becomes very disrupted and disjointed leading to too much human error. Some buildings get drawn and re-drawn three or four times working the traditional way — and every time inaccuracies are bound to creep in.”

He says that once they begin to explain about co-ordinated and collaborative working in a single model environment, “people either get it — or they don’t”. Those that do tend to become enthusiastic in a big way. During the roadshow they gave each visitor a half-hour slot. Those who did “get it” — that is were extremely interested — usually ended up being there over three hours. “They were fascinated by the workflow; the fact that we used the same information from planning all the way down the line.

“A couple of those invited are really keen to take things further and explore ways we can work together,” Mr Marshall explains.

Meanwhile, NC Architects is moving on to a further phase of BIM, determined to extend their work in the 3D environment. Now it is looking at completing the detailing in 3D — not in Revit, this time, but in Autodesk Inventor — already an established product in the manufacturing sector.

NC Architects is working closely with reseller Adris and Autodesk itself has recently enhanced the links between Revit and Inventor to ensure a smooth blend. NC Architects aims to use Revit as a co-ordination platform for all layouts, elevations, planning and working drawings but to use Inventor for explaining the detail. 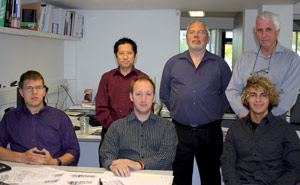 “Inventor enables us to explode detail to give precise instructions, even in a DWX view. Most builders now use laptops and we foresee that if they are given a DWX viewer they will be able to view how everything fits together precisely,” says Mr Marshall.

He gives the example of roof and eaves junctions. “It drives those on site mad when they do not match up and they are unable to fit together. It is expensive to keep skilled workers hanging around while its all worked out. Using Inventor they have the ability to see instantly what should happen and how it should happen.

Likewise when they go through the advantages of being able to tag elements within Revit. “We sometimes get phone calls asking what type of bricks we specified on, say, a housing development we designed ten years ago,” says Mr Marshall.

“Using a digital model we can include useful information that will help save time and costs when maintaining the building. We can now present clients with a package containing a fully-scheduled parametric site plan with individual plot details giving such information as types of bricks, tiles and windows.”

Alongside his work with Inventor, Mr Marshall is also exploring further ways to extend the digital pipeline; that is to use the Revit model for further visualisation, simulation and analysis. The first stage here is to take advantage of the new architecture-focused 3ds Max Design to enhance design visualisation.

Already, using the visualisation capabilities of Revit, NC Architects has reaped the benefits of being able to communicate its ideas via a realistic rendered model. “We have been working on the design for a large housing development. It has been quite a challenging project as the planned homes are on an old industrial site and there is some local resistance.

“Using the rendered Revit model we have been able to create brochures and videos to communicate our ideas, which has helped the planning element greatly. If they have got nothing to see but 2D drawings, people expect the worst. Showing them exactly what a development is going to look like helps allay some of their fears.” Part of the long-term plan is to also use the Revit model for energy analysis and to measure other environmental aspects of the design using Autodesk Ecotect Analysis. “At the moment we have to outsource the task of checking for compliance, but it would be a big advantage to be able to do it in-house.”

Although NC Architects is relatively small in numbers, it has the vision and, importantly, the commitment of one of the big players. Its resolve is infectious and it looks set to lead many of its partners, contractors and clients into the 21st century digital age too. But by planning for the long term and adopting a stage-by-stage approach its foundations are firm — which puts it in pole position for any upturn in the market and future success.