In light of amazing growth and a change in CEO, Autodesk is seeking to reinvent itself. The companyÝs recent press day in San Francisco offered a chance to hear the Autodesk 3.0 pitch. Martyn Day reports. 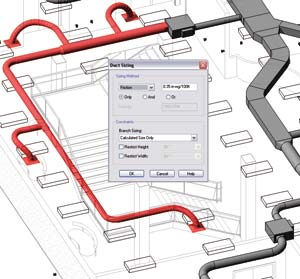 The majority of UK content in Revit MEP is metricised imperial libraries, though this will change in future releases. 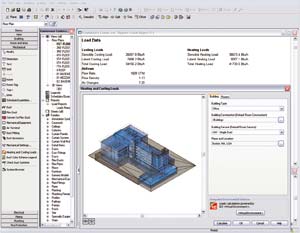 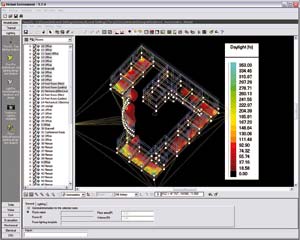 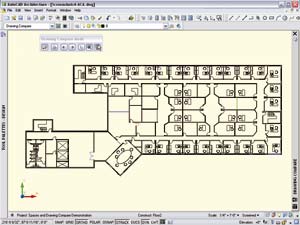 Most engineers already have a view of Autodesk and its products, as AutoCAD is the de facto 2D CAD system and the majority of engineers were trained on, or at least used, AutoCAD at some point in their careers. The worldÝs press, however, has had relatively little exposure to the design giant or its products and with a new CEO at the helm, the company has gone on a charm offensive to build on its consistent and dramatic growth over the last four years. Autodesk has outperformed any of its competitors and the world market for its products, growing in double digits, and appears to show little sign of abating. The company will have moved from a $1 billion company to nearly a $3 billion in under four years.

AutodeskÝs World Press day was held in San Francisco and gave an opportunity for Autodesk to cover company strategy, market dynamics and introduce the new range of 2008 products. On the first day the companyÝs VPs and top Executives got to give their overviews of the market, while the second day offered a chance to drill down into the different divisionÝs (Building, MCAD etc.) product mix and market strategy. There was a break-out area where hands-on product demos could be given and a series of one-on-one meeting arranged.

The net result of this appeared to be that the presentation sessions were all well attended but very few went on to seek a hands on demo. It seems that Autodesk is interesting to the wider press as a business success and industry force to be reckoned with, rather than the real interest in the productsÝ capabilities or developments thereof. I guess some fairly specialised knowledge is required to do this and I should feel relieved thereÝs little competition!

In general the strategy sessions were a repeat of last NovemberÝs Autodesk University main stage presentations (which can be found here) but this time were given with added confidence – and I have to say that the VP team, which has had a little rearrangement this year, are shaping up to be a fairly formidable group. The new Marketing VP, Chris Bradshaw, moved from successfully launching the Civils products and was formerly with Bass while at Buzzsaw (an Autodesk spin-off, online hosting company that Autodesk bought back inside). Then thereÝs the very bright Jeff Kowalski, who takes the long vacant role of Chief Technology Officer (CTO), who worked with Bass at Ithaca software prior to Autodesk buying them many moons ago. In the last few years of Carol Bartz tenure as CEO, Bass concentrated on restructuring and re-energising product development at Autodesk, leading to an appetite to produce new products and innovation. Now Bass has stepped up to the plate, itÝs obvious that Ùhis kind of peopleÝ are taking more prominent roles within the company. I think in the past, Autodesk was more about spin, sales and branding. The new Autodesk is still inescapably very much about sales but thereÝs now more substance backing this up, together with vision and an appetite to visit customers and see what problems need to be solved. There are still serious issues with the Autodesk customer experience that need to be addressed but itÝs hard for such a huge company to really get close to its customers and develop a sense of community. I can see that Autodesk is at least trying in these areas.

As IÝve already really covered the keynote messages in previous articles, I thought it was worth relating the message of the new CTO, Jeff Kowalski. It was the first time IÝd heard him present and he demonstrated some innovative technology.

Kowalski explained how technology is changing the way we design. He saw his job as trying to understand customers, their range of skills, culture and processes and try to augment their design capabilities through digital tools. Kowalski stated that many design tool developers ignore the environment in which design tasks are carried out, and success is when the technology is transparent.

Rarely is the first design the right design, requiring prototype and analysis. This iterative process could be seen as a Ùdesign conversationÝ, and for too long this has required expertise in the field to understand and communicate important design information. Kowalski sees it as AutodeskÝs task to break down this wall and come up with new ways to have this conversation, to allow accurate design information to be delivered in many different ways, from industry experts to home owners.

The other key focus will be to drive intention into the design. So rather than just documenting creation then providing performance analysis, the CAD system will have some prior knowledge of the performance requirements of a design and will actively assist in meeting those requirements. This has been termed Functional Design by Autodesk and is one of the driving principles behind the companyÝs MCAD products.

During his presentation, Kowalski demonstrated two interesting technologies that the company had in development – neither of which the company had any plans to commercialise but were fascinating as they were hardware-biased. One was a very large LCD screen that could be touch activated and manipulated by fingertip, improving man/machine interaction and the other was a multi-axis arm which had a screen attached to it, and as the display moved, the image moved around a virtual, rendered model accordingly. The last time Autodesk demonstrated any hardware to me it had developed was well over ten years ago and was a Virtual Reality system that occupied a whole room.

In a conversation after the event, Kowalski told me that his job is to unify the interface experiences of the many, many products that Autodesk has, as well as to further develop these multi-representational formats to liberate the data which is stuck inside its products.

And so to products. ItÝs that time of year again when Autodesk stops supporting one version of AutoCAD and releases another. AutoCAD 2008 on paper actually looks quite dull. In the past when Autodesk has announced a release based around the AutoCAD User Group wish list, it has usually signified that the company has run out of ideas. The reality of this release is that thereÝs actually a lot of useful stuff in it.

The key features of 2008 include: annotation improvements, layer properties per viewport, enhanced tables, enhanced MText, and multiple leaders. None of these sound too fantastic, like last yearÝs massive boot to 3D capabilities, but whatÝs been added has been done very well and we will review the changes in the next issue.

What has since occurred though is a broad sweep of price increases, for which you had better check with your dealer. It seems that Autodesk Subscription pricing has gone up about 30%, which is deeply shocking. Since its launch in the UK, I calculate that Subscription is up around 60%. With dealers now telling me that subscribers are regularly questioning the value they have received from subs. This is perhaps a price hike too far. We will report on this next month.

AutodeskÝs Building Division has re-organised and renamed a number of products, as well as getting a few more added to its roster. It all makes good sense.

The move confirms that AutoCAD Architecture (ADT) is 2D and Revit is 3D. AutoCAD Architecture features: new annotation scaling, auto space generation, drawing compare, photometric lighting, Sun/Sky systems and procedural rendering. For Revit colour fills have been greatly improved, Revit Groups for repeating units or rooms of similar size has been introduced, and all instances can be edited at once. Dependent Views allows projects to be segmented across multiple sheet views, and Max and Viz can now import Revit 3D DWGs, maintaining materials and camera positions while moving back and fore. There are graphic overrides for object representations and new drag and drop file linking tools and clearer views of nested links. The ÙGoogle EarthÝ plug-in has also been included in the shipping version.

In the past Revit development has been driven by flagship projects like the Freedom Tower and functionality has been added to help skyscrapers grow ÙverticallyÝ. For this release Autodesk has actually looked at the design of buildings over a larger area, such as schools and hospitals, where you have a series of large interconnected buildings. The 2008 Revit release features far better management for these types of projects, regardless of whether youÝre working on one large file or a number of separate files for individual buildings.

The amount of development work that the Revit suite has had compared to AutoCAD Architecture appears significantly out of balance. In short, if you are thinking of moving to 3D go the Revit route. If you predominantly are 2D then stick with an AutoCAD environment. This isnÝt good news for people that invested in ADT and hoped to adopt a model-based process based on it.

At Autodesk, structural and building services engineering have historically been the poor cousins of architecture, but things are changing. For the 2008 releases thereÝs been a lot of work done in those areas, some might say to the detriment of applications such as AutoCAD Architecture.

In line with Revit Architecture 2008, the ability to model non-standard components tops the list of enhancements. A powerful parametric structural truss generator – which was originally available in Revit Structure 4 as an example of what you can do with RevitÝs API – has now been incorporated into the core product. Curved beams (and openings in beams) are also new and warped structural slabs are now possible. In the past slabs had to be of a constant thickness; now you can easily incorporate multiple slopes for draining.

In terms of interoperability, Autodesk has been working with third party structural analysis developers to build stronger bi-directional links with Revit Structure, which are still fairly basic in some applications. In relation to this, with AutodeskÝs proposed acquisition of Robobat falling through late last year many had expected development work between the two companies to slow down. However, weÝve learned that the integration between Robot and Revit Structure is more advanced than ever. Finally on the structural side of things, there are still no plans for an ÙAutoCAD StructuralÝ – the future is certainly with Revit.

On the MEP (Mechanical Electrical Plumbing) front, AutoCAD MEP 2008 (formerly Autodesk Building Systems) is for documentation, while Revit MEP 2008 (formerly Revit Systems) is for systems information modelling – so says Autodesk marketing, at least. As Revit MEP is a much younger product, thereÝs still a gap between the two, with AutoCAD MEP a more rounded product, though this is largely down to AutoCAD MEPÝs mature parts library. The majority of UK content in Revit MEP is metricised imperial libraries, though this will change in future releases and discussions are already underway with several manufacturers.

However, both products form part of the AutoCAD Revit MEP Suite, so anything you canÝt yet do in Revit MEP, you can do in AutoCAD MEP, though this will be at the expense of optimum interoperability with other Revit products.

Finally, in addition to standard analysis functionality, such as pipe sizing and duct sizing, Revit MEP now includes heating and cooling calculations, which is the result of a collaboration with Glasgow-based IES (Integrated Environmental Solutions). To extend this further into the realms of lighting and solar calculations, Revit MEP 2008 also links out to IESÝ

In the May/June edition of AEC Magazine we will be taking a closer look at the new Autodesk 2008 products and their functionality.