While Z Corporation made its name with full colour 3D printers, it has recently released a lower-cost monochrome machine. Al Dean explores what the ZPrinter 350 brings to the entry-level of this increasingly competitive market.

Over the past year Z Corporation has been revamping and reconfiguring all of its 3D printers. In the high-end, colour ZPrinter 450 and 650 spectrum machines features such as automated powder loading, integrated breakout and post processing stations and powder recycling have been introduced, but now these features are trickling down the product range.

The latest machine to get this treatment is the ZPrinter 350, a brand new low-cost product that caters to the entry-level market and reduces cost by only printing in monochrome.

Like the colour ZPrinter 450, the ZPrinter 350 features a good-sized build chamber of volume of 203 x 254 x 203mm. The production process is the same as with the other Z Corp machines, but the initial part set up in Z Corp’s Z Print is slightly easier because it does not require the user to assign colour. Multiple models can be built at the same time and as the machine is powder based these can even be placed on multiple levels. 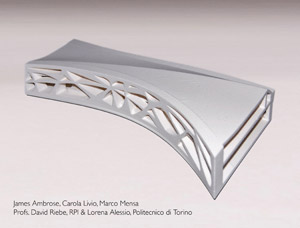 Once the model set up is complete the data is transmitted to the machine over the network. The build begins by first heating the build chamber and then the model is built up layer by layer on the platform. Power is fed in automatically and a complete layer (between 0.089 and 0.102 mm thick) is first spread on to the platform.

Next up the areas required for the part are printed with the cartridge fed binding agent which solidifies each layer.

Each subsequent layer is then printed on top of the other until the form of the build is complete. At this stage the automatic powder recycling kicks into action, removing the excess unused powder for reuse later, leaving the completed part/parts.

The next stage is to move the parts over to the post-processing chamber, which sits to the right of the build chamber. Here, an air hose can be used to remove the rest of the powder and the part can be strengthened. 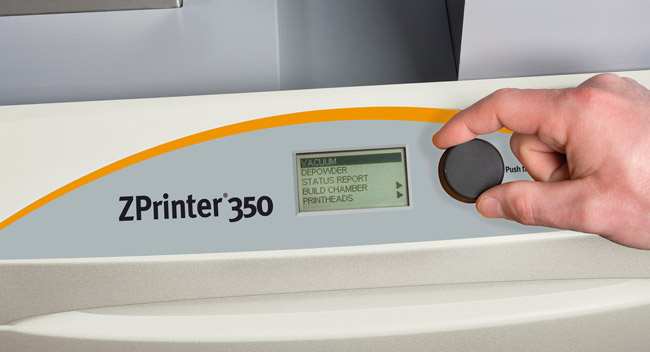 The machine dial gives more control over how the printer operates.

Depending on their geometry, when models first come out of the build they can be quite fragile. While the new ZP150 composite powder means that they are less fragile than before, it is still advisable to toughen them up to withstand the rigours of inspection and design review. 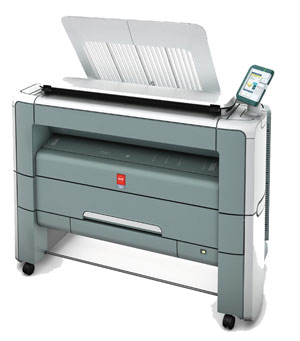 To do this the models can be infiltrated with cyanoacrylate, and while this may sound rather complex, it pretty much involves brushing them over with superglue.

With Z Corp having made a name for itself in colour 3D printing, the question is why go monochrome? The first reason is to save money. This ZPrinter 350 is not only cheaper than the colour models but has a marginally lower running cost due to the use of a single binder, rather than separate colour ones. But then some users simply prefer plain, white models.

The $20,500 price tag is not the cheapest on the market. There are lower cost commercial machines including the Solido and Dimensions’ uPrint, but where the ZPrinter 350 stands out is in its lower cost consumables, impressive throughput and greater build volume. This coupled with the new high-end features such as powder recycling and integrated post processing makes it an interesting addition to the low-cost 3D printing market.