That’s what happens when the results of this powerful combination can be presented to even the most non-technical of users in a compelling, understandable visual format, delivered directly to their familiar mobile device or via an immersive virtual reality (VR) experience, according to Antony Brophy, senior digital manager at Willmott Dixon.

The technology at work here is Revizto, he explains, which fuses multiple data sources together in one collaborative environment to make it simple for all stakeholders to understand a project, to help spot issues and to track them through to resolution.

In Willmott Dixon’s case, the BIM data comes largely from Autodesk Revit; the reality-capture data of the site is from 3D scanners and drones, imported into Revizto as point cloud and mesh data. The end-user viewing device is most frequently an Apple iPad, although a wide range of other mobile devices are used too, as well as Oculus Rift head-mounted displays (HMDs). Either way, the aim is the same, says Brophy:

“It’s about opening up 3D models and making them accessible to more people, so that they can understand a project site and what’s happening there and you can benefit from their ideas and opinions,” he says. “We don’t want to restrict anyone with a useful point of view from seeing what we see. Revizto helps us take BIM out of a ‘specialist-only zone’.”

Comments raised in meetings, especially those that focus on issues, can easily be captured, stored and shared through Revizto’s mark-up tools and subsequently tracked through to resolution. The system’s search engine, meanwhile, makes it easier to locate these issues (and all information relating to them) further down the line.

It’s a democratic approach that works very well in discussions with clients, according to Brophy. “We can show them what they’ve got on the site already, what will be new there, and we can take them on a guided tour around the model,” says Brophy. “They can float into a Revit model, take a look around, and where we’re incorporating that drone data, they can look out the windows, see what the view will be like – and this could be a year or more before we even build anything.” 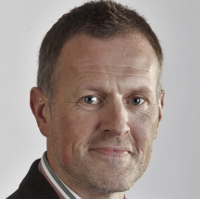 We don’t want to restrict anyone with a useful point of view from seeing what we see. Revizto helps us take BIM out of a ‘specialist-only zone’

While Oculus Rift headsets have proved a popular way to showcase planned projects to clients, in a recent technology pilot, clients were walked through a virtual model of their project projected onto the interior wall of the Soluis Reality Portal, for an ultra-immersive, joint exploration. “It was a superb experience for everyone involved and it’s really got me thinking about using that kind of technology more in future,” says Brophy. “It’s a great way to take people out of the silo of a VR headset.”

It was used, for example, on a recent hospital project, which involves a lot of refurbishment work, as well as some rebuilding. Plant room refurbishment is an important part of the plan here, making it vital to understand before the project began what equipment was already installed in three different plant rooms across the site. The best way to capture that information was via 3D scanning, in order to create a point cloud that was brought into Revit and then shared via Revizto to various MEP and design teams involved in the planning stages. 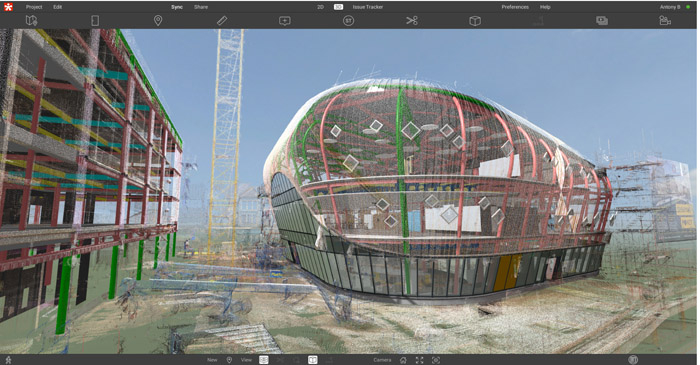 Says Brophy: “This allowed us to basically have the discussions around where we needed to put the handling units, the pump sets and so on. We also needed to understand which pipework could and couldn’t be stripped out, because obviously, this is a hospital that needs to be kept running, so we needed to find ways of doing that. And then we looked at where the new work should start and how the rip-out should begin, so we could plan that all ahead of time,” he says.

“It was a big eye-opener for the team to realise that we’ve got a model designed in Revit for MEP, plonked in the middle of a point cloud, allowing everyone to clearly see where the issues were likely to be. It allowed us a bit of forward-thinking before anyone even got to the site.”

More recently, as part of that same hospital project, drone data has been integrated with Revit, in order to capture an accurate record of the condition of the roof where work will be taking place, so when it comes to handover, Willmott Dixon will see what dilapidation was evident when the project began, compared to what was handed over.

Reality mesh data captured by drones has also been integrated with design data from both Revit and AutoCAD in the case of an entirely new building, intended as student accommodation. “The idea here is can we get a feel for a building from the very earliest planning stages – from the outside, from the inside, looking out the windows. The fact that you can experience a building in its context and its surroundings before it’s even begun is amazing.” 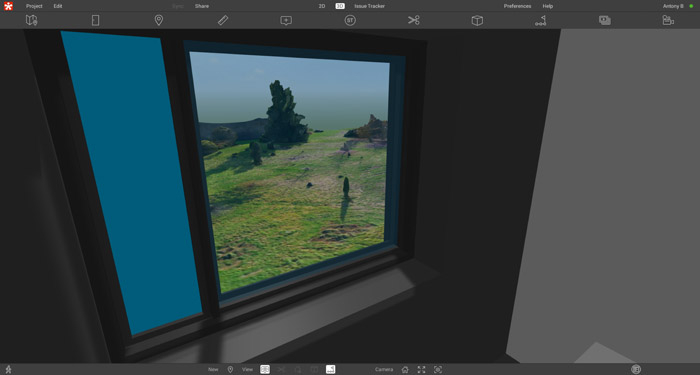 With a context model of the surrounding site stakeholders can get a feel for a building from the very earliest planning stages – from the outside, from the inside, looking out of the window

Willmott Dixon currently has an allocation of 250 licences for Revizto and regular usage now accounts for around 200 of these. These include employees working on the planning and construction phases of projects, as well as employees in the field and construction managers at the handover stage. Members of Brophy’s technical team are among the heaviest users, he says. “As the firm wins new work, projects come in through the doors and we’ll generally push them up into Revizto to show a wider audience in the business and get them talking about the project. From there, the specific project team takes over, taking ownership of pushing their models to Revizto as and when required. So we get them started, but they take it from there.”

More recently, the firm has started loading images captured on a Ricoh Theta V 360-degree camera for the aftercare process. The data lacks the detail of a laser scan, but it’s much quicker to capture and doesn’t require specialist skills. One example of this is in the installation of fire doors in a new school, for which a checklist needs to be created to ensure the right seals and door furniture are in place as the installation progresses.

A 360 photo was taken in every room in the school, taking just two days to complete the task for three separate buildings. Each photo is attached to its respective room in Revizto, as a 360 stamp, and for each stamp, a task is created for the aftercare team. Subsequent progress on the installation can be captured in incremental 360 photos and attached in the same way, creating a complete record. 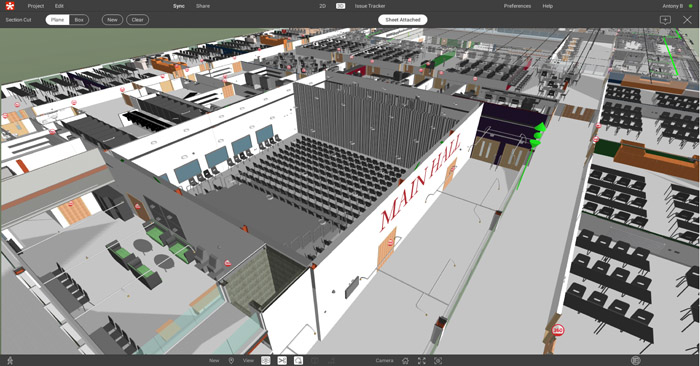 “This is still in the R&D stage at the moment, but the question we’re looking to answer is, ‘Can we do this as the norm?’,” says Brophy. “And the comments that we’re getting back from users is that they’re loving it. They can see it in the field, on an iPad and that really works for them.”

He can see this working for many different aspects of construction work. If issues arise some time down the line, the firm has a complete record, in the form of these 360 photos, of what was done and when – especially in the case of features, such as services ducts, that may now be hidden behind walls or under floors.

In terms of VR, Brophy is now toying with the idea of creating stereoscopic views for groups of stakeholders. The idea here is to equip them with 3D glasses that they would use to watch a walk-through together on a large screen. “So if we had a Revizto-enabled stereoscopic view, people could sit together at a screen, ten people in a meeting room, for example, pop on their glasses and they’re all immersed in it together,” he says. “I love the simplicity of that. There’s obviously technicalities to be resolved around that, in terms of software compatibilities, but that’s where ideally I’d like the technology to go.”

For him, it’s the perfect counter to the downside of VR, in that participants are immersed in their own experience and cut off from those around them. In short, VR can be a highly individual, but potentially isolating experience. The 3D glasses approach, he believes, has the potential to make it far more collaborative, in a relatively low-cost way.

“Given that we’ve already got large screens on all of the sites these days, it’s a logical next step,” he says. And another step, it seems, on Brophy’s mission to bring construction issues – and their resolution – to life for as wide a group of stakeholders as possible – and benefit from a wider and earlier pool of ideas, insights and opinions as a result. 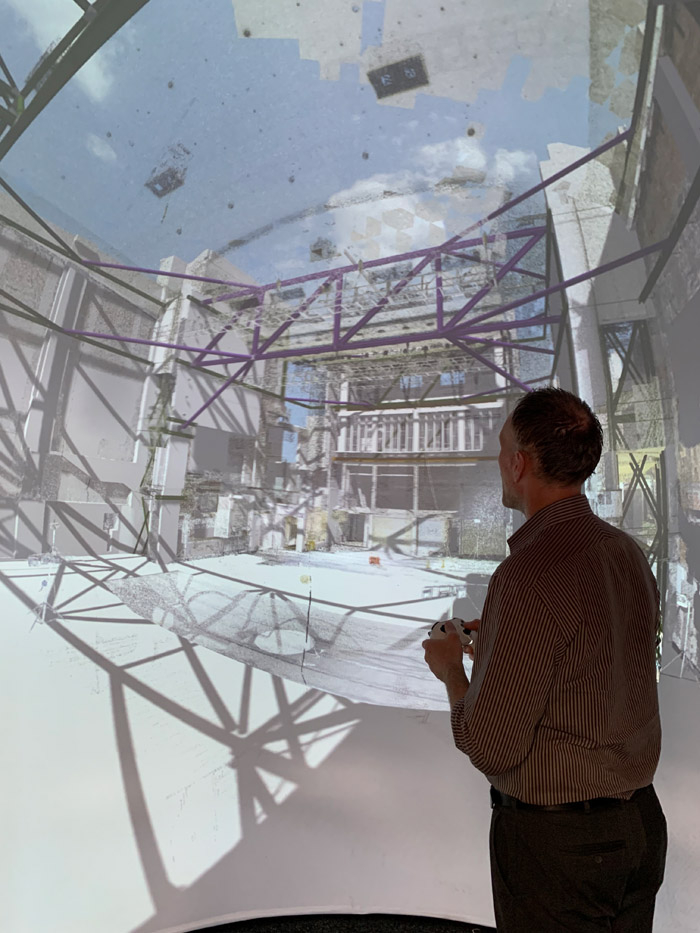