LumentRT may be owned by Bentley, but it’s not just for Bentley customers. The easy-to-use viz tool offers Revit, ArchiCAD and SketchUp users a gateway into a powerful ‘game engine’ environment and it now supports VR, writes Greg Corke.

Now LumenRT is embracing Virtual Reality (VR) in a big way. The software currently works with Google Cardboard, but full-blown immersive VR experiences with the Oculus Rift and HTC Vive will be available before year-end.

Google Cardboard lets you turn your smartphone into a VR headset for around £15. Simply plug in your Samsung Galaxy or iPhone and away you go.

Most AEC-focused Google Cardboard experiences are static, where the viewer can experience a 360 degree panorama from a fixed point. However, the proposed highway design demo we were shown at the recent Bentley YII event in London was much more dynamic, allowing us to view the proposed design from any angle as we flew along a fixed path. Even though we were essentially looking at a succession of static VR panoramas, for an entry-level (and low-cost) VR experience, it was very impressive. 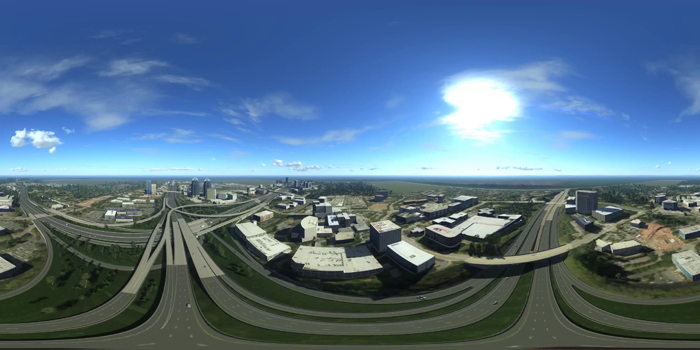 Things should get even more exciting next month when Bentley ships LumenRT Connect Edition Update 2, which will feature support for the Oculus Rift and HTC Vive. This will deliver a fully immersive, interactive experience where users can freely explore LumenRT’s 3D worlds populated with moving vehicles, animated characters and wind-blown skies.

Three years in development, Bentley explored a whole range of VR game engines, such as Unreal and Unity, but decided to adapt its own engine instead. This decision was based on two factors: First, the ability of its engine to scale from small buildings to giant infrastructure projects, above and below ground, and second, the fact that it already had built-in tools for generating realistic AEC-specific features such as cars with wheels that move and traffic flows that are real, thanks to direct interfaces to MicroStation Traffic and VISSIM.

CAD users outside of Bentley’s customer base will benefit, too. In addition to MicroStation, AECOsim, SITEOPS and other Bentley tools, the software works with Revit, ArchiCAD, CityEngine and SketchUp. Bentley says the workflow from CAD to VR is simple. Getting CAD data into LumenRT only takes minutes to process, even with big scenes. Then, because the geometry is already optimised, moving into VR only takes a matter of seconds.

For distribution to clients and colleagues, projects can be packaged up as a ‘LiveCube’, a self-extracting executable.

Once inside VR, ‘BIM hotspots’ will allow users to view the underlying BIM data simply by hovering over an object and clicking. According to Bentley, as everything within the model is ‘instanced’, the memory footprint has been reduced dramatically, helping keep 3D performance levels high, even with large models.

We first saw LumenRT last year, and were hugely impressed by its quality, performance and ease of use. Now, with new VR capabilities, the software looks set to become an even more compelling tool for AEC professionals. The big challenge for Bentley will be letting designers, engineers and architects know that it’s not just for Bentley customers.

This article is part of a Bentley Systems Year In Infrastructure special report. Read the other articles below

The age of the reality mesh: Bentley Systems is forging ahead with Reality Capture by embedding reality meshes into its foundation platform.

Cloud analytics: Knowledge is power Bentley is helping engineers ‘design out’ delays before they happen, by giving them access to real-time supply info.

The future of AR: The HoloLens and the use of reality meshes have got round tracking issues, paving the way for new AR applications.

Bentley Systems futures: Bentley Systems may still be preparing for an IPO, but there has been some important news on its relationship with Siemens that could have big ramifications in the future

The changing face of design viz
NXT BLD 2021 - London, 9 November
White Frog makes the leap to a tiny desktop
Virtual reconstruction
Wooden it be nice
Gräbert targets BIM documentation
The future of Revit
Vectorworks 2022 - the story behind the development
Previous Post
Next Post