The East London Line is part of the London Underground Network and has been operating in various guises since 1869. The line features the worldÝs first underwater tunnel, which was relined and refurbished in the mid-1990s in anticipation of the East London Line upgrade.

The $2.75 billion East London Line Project will connect Highbury and Islington Station on the North London Line with the Network Rail infrastructure in South London. The eight mile project is expected to trigger economic revitalisation in areas that are now poorly served by rail. Mott MacDonald, technical advisor to Transport for London on the East London Line Project, conducted the preliminary design for the project.

Mott MacDonald used visualisation to resolve design issues and move forward into detail design with increased confidence in the validity of the designs.

Like the trains that will eventually run along its tracks, a railway improvement project is governed by exacting timetables. Phase 1 of the project encompasses the infrastructure to extend the railway north to Dalston Junction Station along with a connection to the Network Rail infrastructure at New Cross Gate. This phase is scheduled for completion in 2010, in time for the 2012 Olympics in London.

Phase 1 is divided into three sections: northern, central, and southern. Each section presents distinct engineering challenges. For instance, the northern extension runs 2.5 miles; 2 miles of which will use structures abandoned in the 1980s. The central section is 2.3 miles in length, using the tunnels of the existing East London Line, and the southern extension is 2.2 miles in length.

The northern extension route from Dalston south to Shoreditch will use the Victorian brick arch Kingsland Viaduct, which was abandoned in the 1980s. From there, the new line will pass over the former Bishopsgate Goods Yard on a new concrete viaduct before ramping down to connect into the existing East London Line at Valance Road. From the Valance Road portal, the railway will use existing East London Line tunnels.

The track and the rest of the railway infrastructure, however, will be replaced throughout the length of the central section, and the stations will be remodelled. A new facility at New Cross Gate will handle storage, maintenance and cleaning for the fleet of trains. The facility will provide room to house 20 four-car units and service four units at a time from either of the East or North London Lines.

Four stations will be built on the northern extension to supplement the six at the central section and the two at the end of the southern extension. All told, the project requires 10 new major structures and two dozen minor structures. The central section includes 36 new point ends along the route with 16 more within the storage facility. Additionally, more than 140 signals will be installed along the length of the railway.

Getting more from the model

In the past, signal positioning on a new railway was a matter of experience on the part of the designers involved. Today, there are solutions available that enable designers to build on that experience and eliminate possible risks.

ýBecause roughly half of the infrastructure for the East London Line Project does not yet exist, Mott MacDonald used visualisation to resolve design issues and move forward into detail design with increased confidence in the validity of the designs. The firm built a 3D model of the railway using MicroStation based on topographical surveys and current infrastructure designs,¯ explains Mark Eaden, principal engineer at Mott MacDonald. Mike Stubbs, head of engineering on the East London Line Project adds, ýSignal sighting ensures physical obstructions cannot impede the sight lines to railway signals, and this can normally only be done effectively on site.

ýThe use of virtual reality simulations has enabled the signal sighting committee, as required by Network Rail standards, to assess the physical constraints and obstructions well before the railway infrastructure has been constructed, thus significantly reducing the risk of having to change things when on site,¯ he says.

About 80 signals will be positioned on existing infrastructure. Conservative estimates assigned a cost of ú7,000 to ú8,300 per shift spent on signal sighting, for a total project cost of ú0.6 million.

Mott MacDonald estimated that, as with most urban railways, the sighting committee could go out only at night and resolve signal sighting issues at a rate of one signal per shift on average, meaning that it would take as long as six months to complete the signal sighting, which was the total time allocated to design the signaling system.

Over the six-month period, however, Mott MacDonald spent only ú135,000 on the 3D modelling process and sighting committee meetings. The eight miles of railway required more than 260 discrete models, including all aspects of the railway infrastructure that affects the signal sighting process. Visualisations were initially based on designs in development and then modified as the design progressed, which, of course, had to be completed quickly to confirm design decisions. 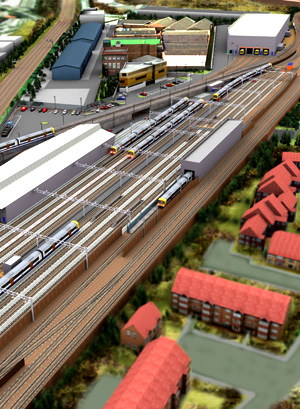 The New Cross Gate facility, for example, underwent several revisions during the project design. Initially, the plan was to house 10 to 12 four-car units. But when preliminary design started, that requirement had increased to 20 units, and included light maintenance and heavy cleaning facilities. Further project enhancements required Mott MacDonald to include a heavy maintenance facility for four train units, and a wheel-lathe and heavy-cleaning building as well.

Bentley solutions enabled the team to make these changes quickly, and helped guide design decisions. The signal sighting process highlighted a critical flaw in the operability of the storage facility, which the Mott MacDonald team resolved quickly and efficiently. ýThe use of Bentley software in the signal sighting activity has enabled the project team to significantly reduce any chance that the design would need to be changed during construction,¯ said Mike Stubbs.

The original request for an initial signal sighting assessment resulted in 18 months of continuous work for the Mott MacDonald modelling team, which included three engineering technicians, an operations professional, and an engineering project manager. The firm is developing proposals to continue the process through the detailed design phase of the East London Line Project.

ýThe initial phases of signal sighting yielded a measurable savings in time and costs, but these direct savings pale in comparison with the potential financial and schedule savings associated with the risks of errors at the detail design and implementation stages,¯ said Mark Eaden.

During detail design, for example, a change in position of a single signal could result in rework ranging from ú21,000 to ú53,000, not to mention several weeks of delay in the schedule. But if that same error arose in the procurement stage of the project, the costs and schedule implications would increase by a factor of 10.

From the start Mott MacDonald intended the 3D model to deliver more value than simply assessing signal sighting. In fact, the model is now used to inform design decisions ranging from passenger evacuation analysis to interdisciplinary checks. The modeling process is designed to leave as many avenues as possible open to exploration. For instance, the savings from using the 3D models to train drivers is estimated to be over ú3 million.