With the help of BentleyÝs RAM Structural System integrated design and analysis tools, KNA Consulting Engineers was able to accelerate the development of a Californian high-school building project.

Since its incorporation as a US city in 1991, Murrieta has become one of the fastest growing communities in Southern California. In fact, Murrieta has more than doubled in population from 2000 to 2006, growing from just under 45,000 to nearly 100,000 residents in just seven years. Its climate, quality of life, and proximity to San Diego are some of the reasons why families have chosen it to raise their children within view of the Santa Rosa Mountains. But the communityÝs rapid growth has put a strain on MurrietaÝs school system, especially its high schools.

As an example, enrolment for the 2007-2008 school year at Murrieta Valley High School was just above 3,000 students while Vista Murrieta High School breached 3,500 students. To address the cityÝs growing student population, the Board of Education signed off on a new high school for the city with capacity for up to 2,200 students, approving the schematic design in November 2005.

When final design was approved in April 2006, a ceremonial groundbreaking was held in March 2007 for Murrieta Mesa High School, a $104 million facility located on 62 acres. The 249,000-square-foot campus will include 82 classrooms, a performing arts centre, and adjacent athletic facilities that feature a stadium for football, American football, and track and field; a pool complex; baseball and softball fields; and tennis, basketball, sand volleyball, and handball courts.

Because Murrieta Valley and Vista Murrieta were reaching their maximum capacities, the need to have the new school constructed as quickly as possible was of paramount importance. To meet the Murrieta Valley Unified School DistrictÝs goal, the design team placed design and construction of Murrieta Mesa High School on fast-track development. 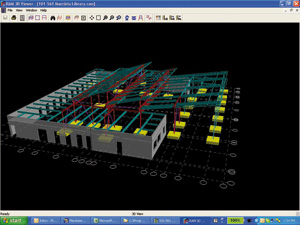 Design development began in December 2005, and in November 2006 construction documents were submitted to the State of CaliforniaÝs Division of the State Architect for approval. Grading of the site – the top of a mesa located between the I-15 and I-215 interstates – began in February 2007 and building construction started in August 2007. The school is scheduled to open in August 2009.

For the structural engineers at KNA Consulting Engineers, the accelerated design schedule was the least of their challenges. More pressing was incorporating diverse structural systems such as masonry shear walls, steel-braced frames, and cantilevered column structures into the design. Additionally, a seismic fault on the site of the Murrieta Mesa High School required the designers to pay close attention to how the buildings would perform during an earthquake. The projectÝs architectural requirements also called for a broad range of materials, including concrete, masonry, and steel. KNA handled these challenges by deploying BentleyÝs RAM Structural System solutions, which included RAM Steel, RAM Frame and RAM Foundation.

ýBentleyÝs RAM structural engineering solutions were able to handle complex lateral systems and a mixture of materials,¯ said Josh Randall, a principal at KNA. ýSupport and training was also a factor in choosing Bentley products. RAM has always provided superior customer support and the available RAM training allowed us to make better use of the products we already had.¯

RAM products work together to allow users to choose the modules and products that best suit their needs, Randall said. Data generated in one product is easily transferred to others, and the DXF export capabilities enabled creation of design documents that were completely coordinated with structural calculations.

To design the structural system, the design team started with basic gravity framing models, which were created during the design development phase of the project using the RAM Structural System, BentleyÝs analysis and design program specifically for buildings. The team was then able to generate complete gravity, lateral, and foundation designs through integration of RAM Steel, RAM Frame, and RAM Foundation within the RAM Structural System program.

The tight integration enabled KNA to streamline its design process and provide a higher level of coordination between the gravity and lateral models. Because these three RAM modules operate from a single model, the integration of the gravity, lateral, and foundation programs reduced the number of files and printed calculations KNA had to provide to the enforcement agency. 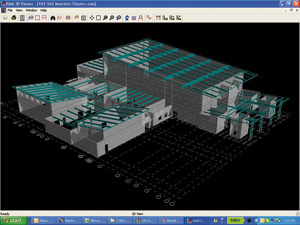 The integrated RAM solutions allowed us to develop design documents that completely coordinated with the calculations in a time frame that would have previously been unheard of,¯ said Randall. ýWe were also able to focus CAD staff on other areas of the drawings, which in the end produced a set of documents superior to what the firm could have produced without the products.¯ KNA had some experience with the RAM Structural System, as it had previously used the analysis and design capabilities of this program and its DXF export function to create structural floor and roof framing plans. To handle the structural engineering for Murrieta Mesa High School, however, KNA planned to take even greater advantage of RAM structural tools and their DXF export capabilities.

By eliminating the need to mark up plans and have them drafted, KNA not only cut down on production time, but also on quality assurance time. There is no longer any need to verify coordination between the structural model and the drawings. The ability to export DXF files from the RAM products allowed the four-person structural design team to take the construction documents from design development to a suitable level for submitting to CaliforniaÝs Division of the State Architect in just four weeks.

By implementing BentleyÝs RAM Structural System solutions to incorporate the diverse structural systems of Murrieta Mesa High School, KNA estimates that it saved between four and six weeks on the structural design process. It also recouped its investment of two days of RAM Frame training and the purchase of additional RAM software on this project alone.

ýRAMÝs software and training allowed us to not only meet challenging deadlines, but to do so with unparalleled levels of coordination and accuracy,¯ Randall concluded. ýThe on-time delivery of the project documents reflected a greater level of completion than what would have been possible without RAM products. The return on investment is reflected in the time savings.