Topcon’s new GTL-1000 is a compact scanner and fully featured robotic total station in one, enabling a site engineer to complete a layout and scan on a single set-up. Greg Corke caught up with Topcon VP Ian Stilgoe to learn how the device is helping change construction verification.

We all know that when construction errors are picked up late, they can prove extremely costly. Topcon estimates that 5% to 12% of a construction project budget is consumed by mistakes and rework. But the industry continues to be heavily reliant on manual checking.

The industry is starting to get some excellent construction verification tools which automatically compare point clouds against design and fabrication models, but getting timely laser scan data from site is still proving a major challenge. This is partly down to technology and partly down to skillsets, as Ian Stilgoe, VP Geopositioning Europe at Topcon Positioning Group explains, “The site engineer’s on site looking after the whole project and knows everything about what’s going on. The scanning team come in, do what they need to do, then go away again. A week later or two weeks later they get the data set. There was a disjoint between what the decision process is on site and this verification. And it tended to become an as built.

“You know, verification is a new word around what we’ve been doing for years, called as-built. But as-built was like, you know, ‘when we’re finished you can do your as-built’.”

The problem with a traditional as-built is it essentially becomes a report at the end of a project and even if mistakes are identified at this late stage they may already have become expensive mistakes.

Stilgoe explains that a site engineer typically uses a robotic total station every hour of every day, but tends to leave laser scanning to specialists. But it shouldn’t be a specialist task – it should just be part of the process, he says.

This was the driving force behind the development of Topcon’s GTL-1000, a combined instrument with a laser scanner that sits on top of a robotic total station. It’s a no compromise instrument, says Stilgoe, “a high-speed scanner that is just as good as any other scanner on the market, without any disadvantage of the robot.

Data acquisition is only the first stage. In Topcon’s workflow the point cloud data is then processed using MAGNET Collage, before being taken into construction verification software ClearEdge3D Verity (see AEC Magazine’s in-depth review here). The software analyses and compares what has actually been built against the design/fab model, automatically flagging any out-of-tolerance or inaccurately constructed work.

Verity works best with steel work and other vertical type construction. Stilgoe recalls one of the pilot projects for the GTL-1000, a renovation of a stately home near Heathrow, where only the fascia was left intact and the rest was gutted. “The apartments were so expensive that almost every millimetre mattered,” he explains. “Inside the building it was all concrete and steel and blockwork. They were literally scanning every time they put a layer of block down, making sure they didn’t lose any volume.” 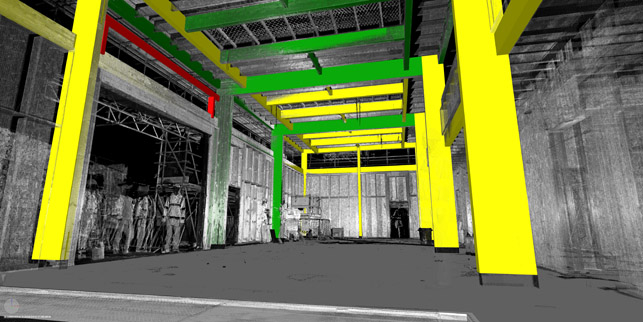 Verity is not as effective on horizontal construction projects, such as asphalt and bridges, says Stilgoe, but this is something that is being explored in the DCW Labs.

In civils projects, drones are used increasingly for reality capture, using Bentley Systems ContextCapture to turn a collection of photos into a reality mesh. But drones have their limitations, as Stilgoe explains, “It’s okay for your earthworks, but when you start to get concrete is it accurate enough? Get into anything with a roof, much more complicated – even the sides of the building is not so easy with drones. But use the drones for the bigger picture, because you do need it,” he says.

But this might change. “There’ll be a combination of drones and scanning in the future when these drones are, say small enough, safe enough and autonomous enough, which they’re not yet indoors.”

Automation and the use of Artificial Intelligence (AI) is also coming to reality capture. Stilgoe admits that Topcon is working with Boston Dynamics to use its Spot Mini robot. This is under NDA, so he can’t share details, but later on in our interview he does raise the important point that you don’t necessarily have to scan the entire site as the processing can become too technical.

“We’re more interested in recognising what’s there and intelligently measuring what you want to measure rather than measure everything and try and extract,” he says.

“You can use visual recognition and then decide what’s got to be measured. Your AI becomes a camera and camera sensors are very cheap, scanners are very expensive, and it just means your deployment can be easier on verification processes.”

This is one for the future but, for now Topcon, is laser focused on replacing robotic total stations on site. “So, most construction sites will have five to ten robots, you know, depends on the size of project,” says Stilgoe. “Our goal is to have a minimum one of these GTLs replacing a robot, and eventually, why wouldn’t you just replace all the robots?