The race for enterprise VR is heating up. Stephen Holmes gets hands-on with Varjo’s first headset and discovers an experience that goes far beyond anything he’s seen before

While the low-end consumer market for virtual reality (VR) headsets has become a mass-produced race to the bottom, vendors developing new technologies have shifted their sights away from mere entertainment, to focus on the needs of high-end professional users.

Varjo, meaning ‘shadow’ in Finnish, is a good example: its VR-1 head-mounted display (HMD) has an effective resolution of 50 megapixels per eye, over twenty-times that of consumer devices.

With that in mind, the company is focused purely on industrial sectors requiring pin-sharp visual fidelity, including architects, automotive and product designers.

The design of its headset owes much to a pedigree that stretches back further than its February 2019 launch might suggest.

In fact, the Varjo team came out of Nokia and its ill-fated acquisition by Microsoft. Its members helped to develop the latter’s HoloLens mixed reality headset for the enterprise sector, before leaving to set up on their own, raising some impressive funding along the way.

The fruits of this can now be seen in the VR-1. It’s a polished product, in many senses. A mirror-finish front gives it a strong visual identity in a market crowded with matte black plastic. And careful thought has clearly gone into materials, fit and the process of putting the headset on: a self-tightening headband mechanism makes it fast and simple to achieve a comfortable fit, but users can also opt to simply hold the VR-1 up to their face, in order to perform a quick check of a 3D model, for example.

Connected to a workstation via a USB-C Link Box and 10 metres of optical fibre cable, the headset is a little heavier than others we’ve tried (the kerb weight is 905g, compared to the 550g of the HTC Vive Pro), but given the quality of fit, it makes little difference once you’re strapped in.

Two eye surrounds come as standard: a spacious universal fit that can accommodate a wearer’s thick-rimmed spectacles; and a tighter fit that narrows the perspective and brings the user closer to the action. 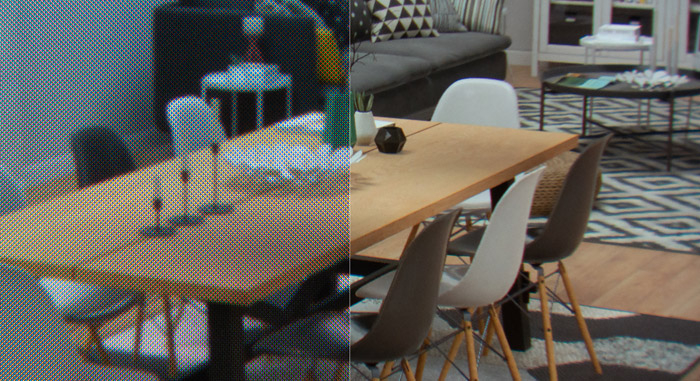 The VR-1’s ‘human eye resolution’ capability works just as the name suggests: an item in the centre of the viewing window is seen in rich detail, while those in the periphery are presented at similar resolution to other high-end HMDs.

The VR-1 does this by using two different displays within the headset: the high pixel density ‘focus window’ in the centre, and the ‘context display’ for the peripheral vision, with the images from both displays blended together.

It takes a little time to get used to this set-up and some deliberate head movement is required to position the focus window on what you want to examine in detail, but the rewards are great in terms of clarity and resolution.

In short, it quickly becomes clear why the VR-1 should be on the wish list of anyone working in high-end visualisation. Stitching and the grain of leather furniture and the exact finish of concrete walls pop into life in realistic detail. Tiny text, which might be nothing but a blur on other headsets, is easily legible. And the effort that goes into lighting a virtual scene truly pays off here.

The depth of field created by the effect of peripheral vision soon becomes second nature, just as it does with human sight, and adds an extra degree of realism to the experience.

High resolution is just the first trick up Varjo’s sleeve. Its proprietary eye-tracking technology adds another string to this device’s bow and gives a tantalising glimpse of the direction of travel for VR.

After a pleasingly brief calibration set-up (you only need to focus on half a dozen dots, and you’re done), a demo seats you in a virtual airport control tower, whereby your eye movement highlights different vehicles and buildings, bringing up useful information or activating animations.

At present, this might seem like a slightly gimmicky sideshow, but Varjo’s aim is to eventually match up the VR-1’s high-resolution focus window with its eye-tracking capabilities, to more closely mimic human sight and add true depth and realism to immersive experiences. This is truly the Holy Grail for VR, and achieving it will require further hardware and software development.

For now, the next step on the horizon is an augmented reality (AR) upgrade, whereby the mirrored front of the existing HMD pops off, and the VR-1 can be used to overlay digital content on the real world, with its eye-tracking proving useful in a range of scenarios, such as training. 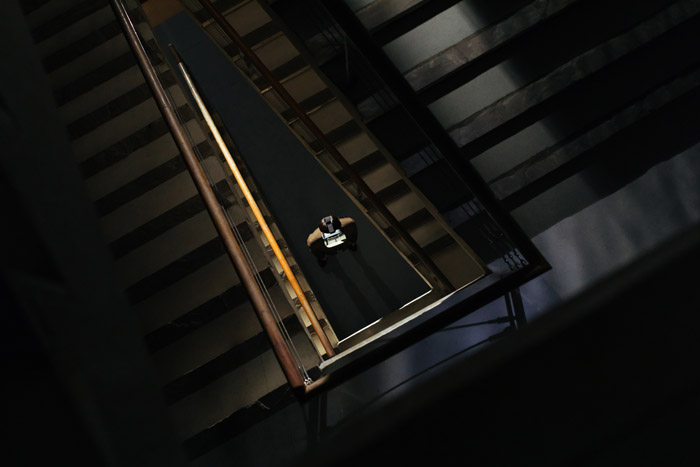 Looking forward, Varjo promises to provide native support for a range of architectural CAD and visualisation software, beginning with Autodesk and its VRED software favoured by the automotive industry.

It already has the four-channel output required to power the two displays needed for each eye in the VR-1’s Bionic Display, and was made ready for the headset back in January with release 2019.3.

A quick demo of VRED with the VR-1 is as sharp as expected, allowing the wearer to move around a virtual car, with real-time editing of the design and the same pin-sharp focus-window details.

For architectural visualisation we saw a number of demos for showcasing interiors – changing the furniture, fixtures and fittings on the fly – visually all a class above what else is out there. Yet, the same showcase also had ability to strip everything back to show the building as a shell, acting as an X-ray for where the utilities and HVAC run.

While the minute detail might not be a key requirement for positioning pipes and cables, the level of realism did make the process feel much more natural, and additions such as pop-up labels powered by the eye-tracking would find great use here.

Additionally, we looked at some HDR images captured from existing buildings. From an inspection point of view, being able to read small text on signs would prove very useful for virtual site visits.

Yet there may be a snag for some prospective customers: one reason Varjo is targeting professional users is that all this wonderful technology doesn’t come cheap.

Current HMD offerings, including Facebook’s Oculus Rift, HTC’s Vive and Sony’s PlayStation VR, all cost below $500. The ‘prosumer’ HTC Vive Pro is around $800, and the newly announced HoloLens 2 and Magic Leap will start at around $3,500 and $2,295 respectively.

So buyers need to be prepared for quite a ramp-up in price when it comes to the VR-1: the headset retails at a cool $5,995, plus an additional annual service licence of $995 – and that’s before you consider additional GPU hardware requirements.

The smooth-azs-silk output that we experienced, for example, was provided by a Nvidia GTX 2080, while a GTX 1080, or the latest range of high-end Quadro GPUs, will also provide enough grunt to power scenes.

At the same time, the technology here goes way beyond what we’ve previously seen in HMDs for pro users, and Varjo is targeting the VR-1 at the upper echelons of design and architecture, where price should be less of an obstacle.

Beyond power walls and cave set-ups, few VR technologies are able to conjure this kind of experience, let alone this level of close-up detail.

Varjo will be showing off its latest developments at at NXT BLD in London on 11 June. Experience this amazing VR headset for yourself.