Adobe’s PDF (Portable Document Format) has become an industry staple for the publishing and circulation of engineering information. Version 7 continues to expand its Engineering applicable capabilities. 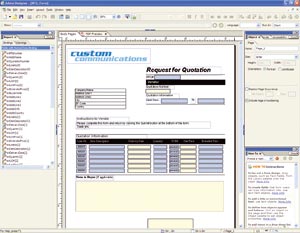 Adobe’s Portable Document File format has come a long way since its original concept to speed up printing through Adobe’s creation of the Post Script format. It has spawned a whole industry based on digital documents and forms what Adobe calls its ‘Intelligent Document Platform’. Indeed, PDF has gone way beyond being just a digital version of paper, and now provides a suite of workflow and data protection products and services which offer massive advantages over traditional paper processes. While people will always want some paper copies, the advantages of maintaining a digital workflow are becoming increasingly clearer, especially in global companies or within supply chains.

Adobe is continuing its concentration on the AEC and Engineering sectors by offering better support for 2D and introducing 3D support for the first time. There’s improved performance all around, a great stand alone tool to produce PDF forms, some powerful create/manage and review tools and enhanced document security features.

Adobe’s key target platform for 2D is AutoCAD, the industry de facto standard. It also happens to be the most vociferous competitor over the last few years. Acrobat 7 has a number of useful additions to better support some of the newer AutoCAD features.

In previous versions only the current model or layout could be converted to PDF, but now PDF supports multiple drawing layouts, which appear as separate pages in the PDF file. DWG text search was added in version 6 but this only applied to layout/paperspace. Version seven extends text search to model space-based PDFs. Layers are also generated from DWG files that create those troublesome proxy objects for products like Architectural Desktop.

In the past, PDF had little understanding of the scale of the drawings it contains, now this has been embedded in the PDF, so measurement doesn’t require prior calibration. These measurements can be saved as markups in the PDF and exported to Excel, potentially for quick quantity take-offs.

In a digital workflow, the ability to add comments and suggest edits and keep them within the documents, is essential. Acrobat’s capability here is excellent, especially with Office documents, and it has a powerful link in with Word documents. However, this feature has been improved, with the engineer and architect in mind. There’s a new Callout tool and a Dimensioning tool. The Callout allows text boxes to be added to specific areas of a drawing, while the Dimension command is pretty self explanatory. Comments from a marked-up PDF can be imported (on a separate layer) into the actual DWG which is pretty useful.

Probably the most impressive addition to the comment capability is that Adobe has removed the limitation of making Acrobat Professional a pre-requisite to add comments. The ability to add comments in a review process is now based on the PDF document, not on the PDF viewing tool. This means that folks with just the free Acrobat viewer may be able to add their comments and revisions without having to pay for an upgrade. It’s all in how the PDF was created. Documents created in Acrobat 7 can now be allocated levels of usage, ranging from pure view, to comment and mark-up. These changes from a number of sources can be collated and then fed back into the original document. This is a great new feature for the managing of change orders or project reviews.

Security policies are profiles that define the security settings to be applied to a document or a set of documents. These policies could be based on workflow, departments, etc. effectively standardizing document security within your organisation. There are a number of different ways to secure PDFs, via passwords, digital certificates, or the high-end Adobe Policy Server option. You are not limited to any one of these; you could apply all these secure measures to PDFs or attachments.

The Abobe LiveCycle Policy Server is probably worth explaining in a little more detail. In fact we will be reviewing the capabilities of this in one of the next few issues. The LiveCycle Policy Server is an exceptionally powerful service that you can purchase from Adobe, it offers some very sexy technology for the control of sensitive PDFs either within your company, or, amazingly, when they have actually left your premises and to all intents and purposes would usually be out of your control. Using a server-based solution, it’s now possible to build-in expiration of PDF files, limiting access to project team members on specific dates. It’s possible to see who opens what protected PDF and ensure that only the right people have access to open the file at remote sites. Should there be any suspected hanky panky with your PDF, you can shut access down remotely!

A personal favourite is the enhanced integration with MS Outlook, so you can literally convert all your emails into a single PDF, with each email occupying a single page. The page includes all links, attachments and text. Unlike Outlook’s (evil!) PST file format, Acrobat’s PDF is compressed, saving loads of space. If you have ever hit Outlook’s 2GB PST file limit, this feature is a Godsend for email archiving.

The new Organizer tool uses thumbnails and doc properties to quickly locate PDFs and group them into collections, without having to move them. Watermarking has been simplified and made more flexible, supporting simple text entry, JPEG or BMPs and more flexible positioning and visibility tools.

Much has been made of Acrobat’s newfound ability to contain 3D models within PDFs. For Adobe, this move was obviously to directly compete with Autodesk’s quickly expanding DWF format and to broaden the appeal of Acrobat throughout the MCAD sector, which is quickly moving to 3D-based solutions. However, breaking from the formula of directly supporting the inclusion of native formats, like Word and JPEG, Adobe opted to support Intel’s U3D format, which, unfortunately is not supported by any of the main MCAD CAD vendors, only Bentley Systems (the developer of MicroStation and key players in AEC and Process Plant) have opted to support U3D directly. The thinking was that Intel had some clout with the CAD developers and Intel’s format was ‘open’ and could become an ISO standard, while all the other vendors have their own ‘open’ yet proprietary 3D publishing formats which are competing in this area. It turns out, Intel had no clout.

Since Adobe included U3D support (in Acrobat 7), the format has gained some momentum in the peripheral developers (As Adobe has some clout) but there is obviously some work to be done with the key MCAD vendors. Adobe has reacted to this by recruiting developers like Actify and Right Hemisphere to include support for PDF as an output for their 3D optimisation products and in December purchased a French company, OKYZ, which specialises in producing 3D collaboration software and being able to read and translate many native formats. So, it looks like Adobe will have some capability to convert native 3D models into U3D and PDF but will probably do this seamlessly behind the scenes using acquired technology. The collaboration angle will also be interesting, should that be included in Acrobat too.

We are in the midst of a 3D publishing format war in the MCAD space, with no real 3D standard. Unfortunately, in our industry, standards are like toothbrushes, everyone agrees they are a good thing but nobody will use anyone else’s. It’s easy for the vendors to create and support their own lightweight 3D formats, not having to worry about their competitors, while Adobe has an unenviable task of trying to support them all. It will be interesting to see how this develops and how soon Adobe can address the issue, as they say, where there’s a will there’s a way.

Acrobat 7 has many great things in it. Taken as a whole it’s a powerful release. The support for key products like AutoCAD is improving and Autodesk’s decision to push DWF hard is obviously helping to drive Adobe’s development for better integration of PDF to compete. The decision to make document review rights document dependent, as opposed to application dependent is certainly an advantage to PDF’s favour. DWF users would be required to purchase Autodesk’s Composer product.

The main fault with the product is that of the choice of 3D standard Adobe chose to support, as it’s only a standard with Bentley Systems and Intel – not the rest of the design community. With a shaky start in the 3D world, Adobe understands that it has to rectify the situation and is working with partners to overcome the limitations of lack of support for U3D within the industry. It certainly seems that Right Hemisphere is playing a key part in this and to be honest only a specialist in this area could provide a timely solution, as reverse engineering 3D formats (even if they claim to be open) is engineering intensive. Fortunately, the majority of the market is still at the 2D level, so there’s plenty of scope to grow this functionality without impacting the product’s broad appeal.

Beyond the feature-level analysis, Adobe’s growing strength looks to be in providing some really top-notch document control services and expertise. To be able to control documents and limit access outside of a typical manage environment would appeal to many companies in both MCAD and AEC. PDF has certainly now become a platform product, which goes way beyond its original value offering.