Lenovo has launched the ThinkStation P360 Ultra, a new desktop workstation that delivers ‘tower-like’ performance in a compact chassis with a volume of 4 litres. It is half the size of a traditional small form factor (SFF) workstation and will replace the 8.2-litre ThinkStation P350 SFF.

According to global product manager Cris Jara, the P360 Ultra is a redefinition of the compact chassis. “It’s a clean sheet design, where our engineering team was given the challenge of how to make a small chassis without compromises in performance.”

Notably, the ThinkStation P360 Ultra also supports up to Nvidia RTX A5000 mobile professional graphics with 16 GB of VRAM. This is a big jump up from the Nvidia RTX ‘2000’ or ‘3000’ class GPUs often found in compact workstations and makes the P360 Ultra suitable for a much wider range of GPU-accelerated AEC workflows. This includes VR, GPU rendering, real time visualisation, and reality modelling, as well as 3D CAD and BIM, which are more typical for a machine of this size.

This feels like a very significant release from Lenovo – a machine that looks set to redefine the compact workstation. The ThinkStation P360 Ultra not only promises to rival the performance of traditional Small Form Factor (SFF) workstations but in GPU-centric workflows, it should even outpace them.
Read what AEC Magazine thinks

The P360 Ultra measures 87 x 223 x 202mm and features a unique design where the motherboard runs down the middle of the chassis. According to Lenovo, this allows for superior cooling thanks to two distinct airflow channels either side of the motherboard, and maximum space efficiency when configuring the workstation. With a single external shell that slides off, Lenovo also says servicing is easy, and users can get quick access to internal components without having to deal with screws and panels.

Elsewhere, the system supports up to 128 GB of DDR5 SoDIMM memory, which is double that of the slightly smaller HP Z2 Mini G9 and Precision 3460 Compact. This ‘industry first’ is enabled by having four SoDIMM slots (two on either side of the motherboard) so there are dual DIMMs per channel. According to Lenovo, it is the result of working very closely with Intel.

Other features include two PCIe Gen 4 slots for expandability (one PCIe x16 and one x8), up to 8TB of M.2 storage, and support for up to eight displays across two GPUs. The machine comes equipped with dual onboard ethernet, which could be useful for remote management, and dual Thunderbolt 4 ports on the front, which are typically found in mobile workstations. A VESA mount accessory is coming later this year.

In order to support the Nvidia RTX A5000, Lenovo developed a custom board for the mobile GPU, which Jara explains is MXM protocol driven through a PCIe standard riser.

With a base Thermal Design Power (TDP) target of 110W the GPU will not deliver as much performance as a desktop RTX A5000 (which has a total board power of 230 W). However, Jara is keen to point out that even though you’ll find the same GPU in a mobile workstation, users should get better performance since the P360 Ultra has superior cooling. Compared to a standard desktop workstation, users can expect slightly better performance than a desktop Nvidia RTX A4000, he says.

While the RTX A5000 makes the P360 Ultra suitable for a wide range of demanding GPU-accelerated workflows, it can also be configured with lower spec GPUs. This includes standard low-profile desktop graphics cards up to the Nvidia RTX A2000. Jara told AEC Magazine that graphics options will expand in the future with a ‘3000 class’ GPU and an Nvidia RTX A5500.

With the motherboard running down the middle of the chassis, the P360 Ultra can also support two GPUs via a PCIe x16 slot (on the side of the motherboard that houses the CPU), and a x8 slot (on the other). While the RTX A5000 can only be placed in the x16 slot, the machine can support two low profile desktop GPUs, such as the RTX A2000 or below. This could be useful for remote graphics applications, where the P360 Ultra could be configured as two virtual machines using GPU pass through, so each user has a dedicated GPU.

While Lenovo is not yet promoting this ‘non-traditional’ use case, Jara told AEC Magazine that Lenovo is working on solutions for rack mounting and systems management.

This feels like a very significant release from Lenovo – a machine that looks set to redefine the compact workstation.

The ThinkStation P360 Ultra not only promises to rival the performance of traditional Small Form Factor (SFF) workstations but in GPU-centric workflows, it should even outpace them. This includes the Dell Precision 3460 SFF and even the HP Z2 SFF G9, which can take a desktop Nvidia RTX A4000.

The P360 Ultra also stands out for its memory capacity which, at 128 GB, is double that of many similarly sized workstations. While most core AEC workflows will fit comfortably into 64 GB, as the industry continues to embrace more demanding workflows like reality modelling, having access to large amounts of memory will become more important in the future.

The IT industry has long been obsessed with shrinking down technology, but this advancement feels particularly relevant at this moment in time. As working environments continue to evolve, with more people working from home, a high-performance space saving chassis will be extremely attractive to many firms.

Finally, the ThinkStation P360 Ultra also seems very well suited to remote graphics applications. With dual GPU support and 128 GB memory, it should comfortably support two users. And with expected good density in racks, it will be interesting to see where Lenovo takes the ThinkStation P360 beyond the desktop.

The ThinkStation P360 Ultra will be available later this month starting at $1,299 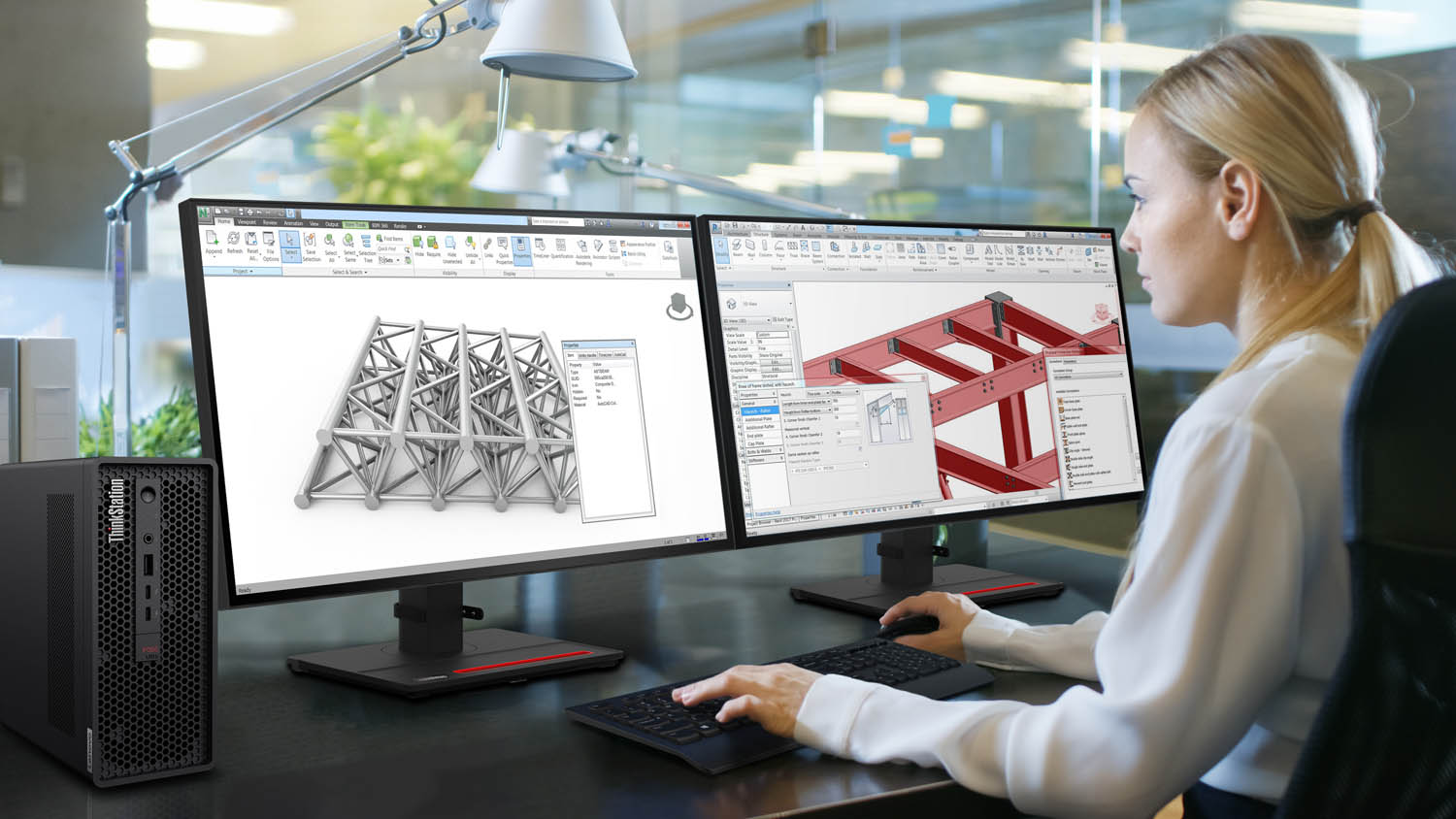