The latest version of AutoCAD, the classic 2D CAD tool from Autodesk, finally brings 3D to the masses. The question is, do the masses really want that kind of functionality? Martyn Day takes a closer look at AutoCAD 2007 and AutoCAD LT 2007.

A new version of AutoCAD every year is now the norm. With each release, Autodesk has been working around themes and beefing up the functionality in specific areas, such as presentation, 2D and collaboration. To date, the AutoCAD development team has done an impressive job of adding really useful and innovative functionality to what had become a fairly stagnant, yet universally popular product.

AutoCAD 2007, released in March, is the latest and greatest release and, here, the development team has been exceptionally ambitious, fitting in major changes. The main theme for this version is 3D. While not necessarily the main use of AutoCAD, being the 2D stalwart that it is, Autodesk has made a bold attempt to update AutoCAD in an area that, to be honest, was pretty bad. The last time Autodesk did a major 3D update was in Release 13, adding ACIS and breaking the product in the process. But fear not, the development team has done a great job this time!

It’s as if Autodesk has added a completely new 3D CAD package into AutoCAD. AutoCAD now operates in ‘Classic’ mode or a new 3D mode. Both feature different interfaces and rightly so. AutoCAD, in ‘Classic’ mode, by and large looks like the last release, with the odd tweak here and there. 3D mode, on the other hand, looks more like 3D Studio Viz or SketchUp.

With the design industry slowly but steadily moving to 3D solutions, it’s right that AutoCAD is brought up to date, to offer millions of users the chance to at least play and experiment with 3D modelling. The MCAD industry is well on the way to a 3D only market but AEC (Architecture Engineering Construction) is progressing slowly. However, the success of products like SketchUp has demonstrated that an easy to use 3D tool does have its place in the predominantly 2D architectural practices. Ease of use appears to have been one of the key themes behind Autodesk’s 3D implementation. 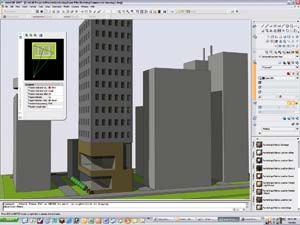 So, ‘what’s new in 2D?’ The XREF Tool palette acts as a management tool for total control of attached or referenced documents and images within a file. AutoCAD 2007 now allows DWFs to be added as an underlay, which is actually a very impressive way to attach light-weight drawing information to DWGs. To attach a DWF, pick an insertion point, scale and rotate, although unlike an XREF you can control the contrast of the DWF image, clip it and snap to it, making tracing a great new option.

Much has been said in the war of marketing between Adobe and Autodesk. Despite pushing DWF as the solution for engineering drawings, Autodesk has finally implemented a PDF plot capability.

The Express tools that were included in the last release have been incorporated into the menu structure – which is really just tidying up from AutoCAD 2006.

With all the 3D changes and some behind the scenes architecture work, the ARX specification has changed, which means that the DWG file format has changed with 2007. It also means that third party ARX applications will need to be updated to run with this release.

Prior to the launch of the product, Autodesk was telling journalists that there would be a DGN read/write capability (DGN is Bentley’s MicroStation CAD system format). However, 2007 has shipped without this functionality in the box. Autodesk has said that it will ship the DGN utility some time this summer. It’s unusual for Autodesk to say something will be in AutoCAD and then to pull it or delay it. We understand that Autodesk is reverse engineering the format itself, so perhaps it has taken longer than expected. It’s interesting that Autodesk is recognising that there are other CAD systems out there. What’s more likely here though is that Autodesk’s Civil and Geo division needs DGN compatibility to compete with Bentley in these relatively new markets. Autodesk is also making noises about the Process Plant sector. N.B. As we went to press, Autodesk announced that a beta version of its V8 2D DGN conversion utility is now available for download.

So, AutoCAD is 3D capable now and it’s so easy to use, it’s amazing. It’s actually harder for someone to learn AutoCAD’s myriad of 2D commands than pick up AutoCAD and just start modelling. There’s a 3D grid to help and a bunch of expanding menus on the right hand side. Simply insert a primitive, grab and stretch and pull, or draw an 2D shape to grab and extrude. It even does complex elements like a helix. The real-time shading adds to its interactive nature, and really complex shapes can be created from merging and cutting any number of objects. All the elements are solids and can be exported to Inventor. There are a number a great shading options and a high-end ray trace engine from Mental Ray. One thing to note is that you might want to make sure you have enough fire power on your graphics card and RAM. 2007 comes with a built-in benchtest to measure the capability of your machine. By the way, the 3D stuff has been left out of AutoCAD LT, which leads us on nicely to the next section. 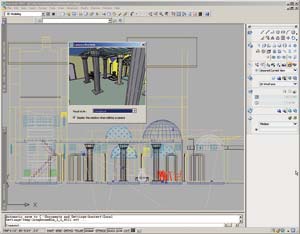 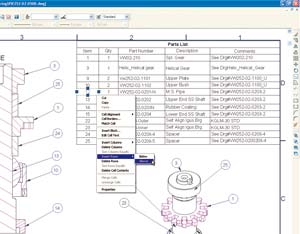 AutoCAD LT has become a phenomenon in the UK. Its growth and sales have been nothing short of staggering. This, despite a hefty price tag that’s nearly 100% more than it costs in America ($800 off Autodesk’s website in the US and ú868 on the web at a UK store). That kind of dollar for pound conversion really narks me and I thought it was consigned to US/UK pricing history but not so. Having said that, it seems that LT has almost become a disposable CAD seat that’s bought for projects, discarded over the years and bought afresh for new projects. This also indicates that the stigma of using the ‘cut down version’ isn’t really an issue anymore.

Over the last three years, Autodesk has driven an ever wider gap in terms of functionality between full AutoCAD and LT. With 2007 that distance becomes even more noticeable. AutoCAD LT is very much just for production drawings, while AutoCAD is the 2D/3D presentation and collaboration platform. This release marks probably the greatest difference in terms of new features between the platforms, as 2007 is mainly about 3D and LT just isn’t.

The change in DWG file will mean that upgrades or ‘throw-outs’ of LT will happen thick and fast. Over the coming year, 2007 DWG will be a requirement of future projects. LT gets the PDF out capability, which should be useful, in conjunction with DWF. The Express tool integration has also been implemented in LT 2007. The dynamic blocks and dynamic input (user interface) from AutoCAD 2006 have also been included in LT now.

Apart from no 3D, the other big handicap of LT was there were no customisation or ‘official’ add-ons. Autodesk is determined to continue this policy and there’s still no customisation language or additional programs available – and nor are there likely to be any in the future. While on the subject of limitations, LT also doesn’t offer the network licensing management options that come with AutoCAD. The standards and quality checking tools are omitted, as well as the multi-sheet environment and AutoCAD LT doesn’t have gradient colouring, shading or rendering.

So, the gap widens and LT only gets a few new tricks this time around. However, the main benefit is the compatibility with the new full-blown AutoCAD’s DWG format. Even though we are paying a lot for LT in the UK, it’s still a great deal when compared to purchasing a whole new seat of AutoCAD and is probably why it still sells so well.

In return for paying ahead, there are a number of ‘added value’ elements to the subscription package. The yearly subscription fee is less than the historic upgrade fees. Also, by moving on to subscription, the main benefit is you get access to the latest product upgrades and enhancements, keeping your versions current, should you so chose to deploy them. There is an element of web-based support supplied direct from Autodesk technical experts. Here you email off questions and await the response – not ideal and your local dealer might be more responsive, but a worthy back-up I guess.

From the Subscription website, Autodesk provides webcasts on product development, weblogs from developers and access to Autodesk University special offers and privileges. Autodesk has also put considerable effort into developing e-Learning lessons which are actually pretty good and available from this website only to subscribers. You also get pre-qualified status in beta programs for unique opportunities to use unreleased software.

If you are a 2D user and have no intention of moving or playing with 3D, 2007 will be a bit of a disappointment. There are no two ways to say that. However, what has been added to the 2D side of things is useful and valid. Looking at the bigger picture, Autodesk had to do something about AutoCAD’s poor 3D and it’s amazing that so much has been done in one release and it’s done well. I am sure the next version will be back on track with the 2D crowd pleasers but for now we have to accept that in this release the ground has been laid for some really exciting developments for future model-based applications.