AutoCAD DWGs are loaded to a server on the web and streamed to the iPad for real time zooming, panning, markup, editing and sharing.

Apple’s iPad has managed to carve a new niche in the portable computing market. The device features a battery that lasts ten hours, an identical interface to the company’s popular iPhone and a big 9.7-inch colour screen. Seen as a replacement for netbooks, iPad sales have exploded, managing 14.8m devices sold worldwide last year.

It was only a matter of time before CAD vendors tapped that market.

I looked at several of the early CAD-like apps and they were embryonic at best. Then suddenly out of the blue at the end of September 2010 Autodesk announced AutoCAD WS for the iPad, iPhone and web browser. 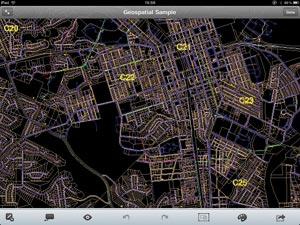 File size is no problem as they are compressed on the server and streamed to the iPad. The current version is 2D only but 3D will be available in the future.

AutoCAD WS is a free DWG compatible viewing and editing app, which uses ‘cloud’ technology to stream design files interactively to a web client. Downloads of AutoCAD WS were brisk and have reached a staggering 750,000 users. The key benefits are the ability to show AutoCAD DWG files to clients using the iPad or iPhone, redline and markup drawings, edit entities, accurately measure distances and share drawings.

At the core of AutoCAD WS is a technology called Visual Tao, which Autodesk acquired at the end of 2009 for between $20-$30 million. Using the cloud principle, all files are uploaded and stored on a web server and streamed down to a web client (web browser, iPad, iPhone).

That is clever but the really interesting element is that slowly, AutoCAD’s 2D toolsets for geometry creation and editing are being added to run in the browser too. AutoCAD WS is one possible technology that could enable AutoCAD to be available everywhere.

Additionally there is some ability for multiple people to share the drawing space for collaborative sessions, as well as non-destructive mark-up tools. 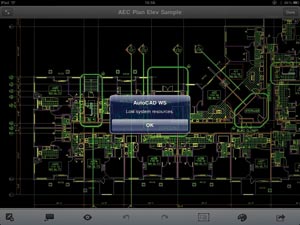 An all too common problem is running out of resources. It is important to check that the iPad or iPhone is not running tens of applications simultaneously.

In practice, version 1 showed off the possibilities of the technology but had some drawbacks. The key issue for me was the requirement that AutoCAD WS had to have an Internet connection to work. In the latest update, version 1.1, that necessity has been removed and DWGs can now be locally cached, enabling off-line usage. This is a major, liberating improvement and means AutoCAD WS is now a great way for taking designs to clients and for access on-site or in remote parts.

When it comes to geometry creation and editing, I have to say that this was, and still is, quite basic. I think calling it ‘AutoCAD’ may set expectations a tad too high, this is not a CAD system. It is a great view and markup tool. I have no doubt that over the next few years this will change but for now, AutoCAD WS is the iPad equivalent of Autodesk Design Review.

However, this is not to say new features are not being added to flesh out its capability. There is a plug in for AutoCAD to ensure the DWGs that are uploaded to the cloud are always the latest. It is also possible to see the timeline of drawing creation (revision history).

One problem I kept hitting with the first version of AutoCAD WS was running out of system resources on the iPad at first launch. With a professional level app and DWGs filling a fair amount of space this could have been a memory issue or a bug. With AutoCAD WS version 1.1 this does not appear to have gone away and I fear it has more to do with the way that iPads allocate system memory. 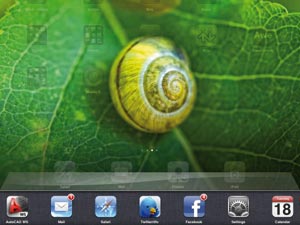 By double clicking the command button on the iPad the application toolbar appears. Here unused apps can be switched off. Done regularly this is also good practice to save battery life.

The iPad is capable of multi-tasking (it can run multiple applications simultaneously) and once loaded they reside in memory until the user decides to specifically shut down the application. To do this, double tap the command button and at the bottom of the screen the apps currently loaded can be seen. At the end of a day’s use this can be littered with tens of apps hogging the memory. By shutting down the non-essential apps, the system resource warnings tend to disappear.

Version 1.1 seems like a minor update to AutoCAD WS but the local cache capability makes it exceptionally useful. As a professional tool, AutoCAD WS was a great reason to buy an iPad to ensure you have instant access to all the latest DWGs. The iPad’s ten hour battery life and other capabilities (email, web, document creation, presentations, audio recording, photo editing, etc) make it a serious business tool.

iPad 2 has just been launched. It features a faster processor, front and back cameras, higher resolution screen and the ability to print documents wirelessly. These are exciting times for new possibilities in portable computing. N.B. We have not tested AutoCAD WS with the iPad 2