With Autodesk going 100% subscription from July 2016, the company continues to stretch out the development and delivery of new capabilities throughout the year, including traffic simulation for InfraWorks 360 and a performance boost for Revit. By Martyn Day

Subscription means enhancements come as part of the deal. You are always on the latest release and can benefit from new developments as they arrive. For Autodesk’s AEC team, moving from a single yearly release cycle, to in-cycle enhancements has taken the form of a mid-year update.

In the past Autodesk would compile a release with hundreds of new features and enhancements in the hope that customers would pay to upgrade to get the productivity benefit; then after three releases if all the advances had not enticed folks to upgrade then the threat of an ‘obit’ of a three year-old-release would assist (meaning it could not be upgraded at a reasonable cost).

The move to subscription makes that whole process go away. But it means to assess the value of the new features added, you have to take in what has been released throughout the year. For instance, the updates to Revit in March seemed underwhelming but they need to be combined with the mid-year updates for the subscription value to be appreciated. It is not only a different way of ‘owning’ but also a different value proposition.

New with this update, InfraWorks 360 has advanced ‘Traffic simulation’. Some of this functionality was available in a ‘preview’, which Autodesk pushes out to customers but now the capability is deemed to be good enough for prime time. Autodesk does these technology trials frequently, like corridor optimisation capabilities in the last release and through Autodesk Labs projects.

Looking at traffic flow, the new capabilities allow designers to identify problem areas, re-design and then re-analyse in a virtual environment giving visual results. Compared to products like Civil 3D, InfraWorks 360 almost feels like a game, as it displays rich 3D worlds that can be spun and manipulated in real-time while engineering designs are assessed and edited.

Designers input traffic flow and the mix of vehicle types, add signals, define turn lanes, then specify time of day. Obviously rush hour is going to be the most popular to check stressed situations.

Autodesk’s headquarters are in California, where roundabouts are a recent introduction, and while it took Autodesk a long time to implement them properly in its software, it is good to know that InfraWorks 360 Traffic simulation can handle those too. It is possible to watch the results in real time and edit and re-run the simulation to optimise the design prior to detailed design. The software simulates those annoying drivers who are in the right lane but want to turn left (no, no, never done that ever). Traffic simulation is a significant addition to the software and looks very impressive.

InfraWorks 360’s ability to deal with railway design has also seen a considerable improvement with the ability to custom-generate detailed rail styles, allowing for various conditions and rail track types e.g. troughs at tunnel entrances, circular tunnels, viaducts, etc. It is possible to combine railtracks to apply bridges. In the previous release each track required its own bridge.

Road intersection modelling has been improved, enabling staggered intersections. Talking of roundabouts, InfraWorks 360 can now model left and right hand drive conditions, which is handy for us in the UK and probably one of the reasons that InfraWorks 360 has not been widely adopted yet. Yield signs and road markings are now displayed.

Bridge design has a new library of realistic foundation and pier types, which can be customised. Multiple components (piers, girders) can be applied throughout a design style, using an ‘Apply To’ tool. Quantity and volume calculations have been moved to ‘on demand’. Previously InfraWorks 360 caused unnecessary performance-hitting calculations across the design, causing excessive model regenerations.

When you see the leaps and bounds that InfraWorks 360 has been doing in the last few releases, Civil 3D seems awfully pedestrian but it is a much more mature product and does not need huge new slices of capability.

In terms of Civil 3D updates Autodesk talks mostly about the continual improvement process that the company has taken to the ongoing development of Civil 3D and it is a reassuring story.

It seems the development team is taking a longer-term view on Civil 3D and has planned to add content much more regularly than other Autodesk AEC products.

Through the release of Productivity Packs, Service packs and Extensions (such as the forthcoming Transport extension), Civil 3D customers can look forward to a number of regular bundles. Autodesk has delivered one Productivity pack this year, which featured updates to Civil Engineering Data Translator, Rail Turnouts and Crossings, Coordinate Geometry Editor, improvements to Surfaces, the Bridge Module, Geotechnical Module, River and Flood Analysis Module and Pipe networks.

By Autodesk University (December), the company will aim to ship a second Civil 3D Productivity pack, which should include enhancements to: Reports, Alignment, Corridors, Points, Profiles, Projects and Surveys. Civil 3D and Revit will start to work better together with Revit supporting the import of corridor information. To bring the community into the development of Civil 3D, Autodesk has launched an IdeaStation portal for Civil 3D and InfraWorks 360, on the Autodesk community site, where users can wishlist development area and post suggestions. In addition a Autodesk Civil 3D Futures portal enabled previews of new functionality being developed, where users can try out and feed back on new features in the pipeline.

And so to the big one, the mid-year update to Revit for subscription customers, currently in beta with the codename ‘Sunrise’. As it is not yet released, Autodesk maintains that the functionality on show may or may not make the final version, expected mid October. Again, there is no file format change and it covers potential forthcoming features in Revit Architecture 2016, Revit MEP 2016, Revit Structure 2016 and Revit LT 2016. Autodesk has not confirmed exactly when the features in the tech preview will be available.

The most significant update lies at the very core of Revit and applies to every Revit-based product, and it is a major boost to speed of operation. Revit now supports ‘Occlusion Culling’, which means it only draws the visible elements and uses a Graphics Processor Unit (GPU) to work out what elements do not need to be drawn. Autodesk says this provides a 30%-40% performance gain on complex models with lots of geometry, improving model navigation, and model manipulation (orbiting/panning).

Export commands, such as export DWF or Autodesk 360, are now ‘parallelised’ and no longer significantly impact performance. They also make more use of hardware power.

When the crop region moves, Revit no longer updates the view, leading to fewer refreshes. It is much faster to draw walls and ducts with Revit automatically replacing complex geometry with lines, when the view is far enough away.

Global parameters take the intelligence from the family environment and applies it to the project. Parameters can be applied within projects. These can be turned into reporting parameters and applied to other objects, the user can add offsets and formulas. This can create very complex and useful relationships between objects as design changes are made. Reveal Constraints can also be used to find these user-defined parameters.

Family Element Visibility Preview shows what geometry will be visible when loaded into a project. 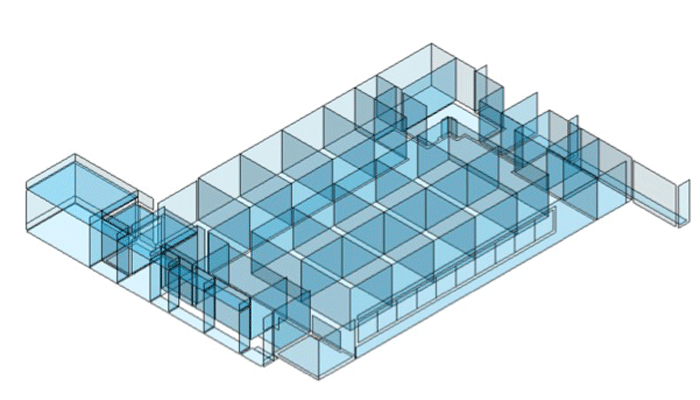 Revit Sunrise has automatic thermal zoning, creating an accurate model for analysis or export to gbXML

There is a wide range of enhancements. IFC4 with support for ‘advanced BRep’, view filters, name reference planes in canvas, cancel multi-sheet print/export (as opposed to having to shut down Revit). Most have been requested by customers.

Sunrise offers custom rendering settings to the new Autodesk Raytracer engine; underlay has been improved; railings have previews; copy and paste is available in perspective views; and wall join type can be selected during wall creation.

R2 includes default circuit rating and is customisable to allow for non-US circuits.

With each product at different stages of maturity, it seems the development teams are taking divergent approaches to developing and releasing enhancements throughout the year.

Infraworks 360 is the hot product with major new functionality; Civil 3D has an experimental subscription model of its own and is seeking to bring customers in to influence future direction. Revit is chugging along. Autodesk has finally bitten the bullet to improve its operational speed by better utilising GPU acceleration and stopping Revit from wasting time tying up valuable processors calculating geometry that cannot be seen. It is my understanding that there will be more of this kind of performance work to come.

Looking ahead, as Autodesk goes from experimenting with subscription-only for individual products in January, to only offering new Solo or Suites on subscription come July 2016, the perceived value of the additional functionality becomes much more important. Autodesk has been experimenting with ‘portion size’ and has not always hit the mark. With Civil 3D it looks as if it will increase the regularity of additional features.