While many firms wrestle with getting their BIM workgroup implementations working on desktops in an office, one company is aiming to revolutionise collaboration by moving the BIM data to the cloud.

We all know that Building Information Modelling (BIM) is a hot topic and is now being backed up with increasing numbers of adopters, assisted in the UK with an impending government mandate for its own building projects. While there are many advantages to the deployment of modelling technology, one aspect that is currently being lauded are its benefits to collaboration within design teams and project participants, in federated and highly disconnected building industries.

Users can visually select geometry to reserve for modification, with built-in instant messaging

Unfortunately, this advantage has still yet to be truly realised, partly for cultural reasons, but also for some serious technical ones. Nearly all BIM modelling applications were designed primarily as solo seats, for so-called ‘lonely BIM’, with very little consideration that there may be five, 10 or 200 seats working collaboratively on a single model or project.

BIM severs, such as Autodesk Revit Server, are relatively new and will usually only work with one vendor’s BIM tool and proprietary format. Significant data incompatibilities between vendors’ proprietary BIM formats and the huge file sizes of BIM models have not helped in-house or wide-area collaborative working. This can be a massive problem, even for experienced BIM users who have to patch together their own technology stacks from an array of applications.

The best implementation of a BIM workgroup server that AEC Magazine has seen comes from Hungarian developer, Graphisoft and its Teamwork product, which was first released in 2009. While limited to managing ArchiCAD modelling sessions, the company has produced an easy to deploy server that runs on a local machine and operates over LAN or WAN networks.

Users can visually select geometry to reserve for modification, with built-in instant messaging. This level of granular access means only small amounts of data (measured in Kb) are sent over the network in an editing session.

Teamwork also provides a management layer with allocation of roles and access with reports. Graphisoft recently took the next logical step and announced that it is taking this capability to the cloud.

For the launch Graphisoft, which is based in Budapest, chose to hold an event in Tokyo, Japan. While on the face of it, this may seem like a unusual and expensive option, the trip was not just about the new technology but also about looking at the global BIM market outside of the traditional European and North American markets, where vendors such as Autodesk have much of the BIM mindshare.

In reality, outside of the UK and America, AutoCAD and Revit’s apparent domination is not the typical status quo. In mainland Europe, companies such as Nemetschek, owners of Graphisoft, Vectorworks and Allplan, have a bigger market share than Autodesk Revit in many countries.

Graphisoft’s invitation to Japan was equally an eye opener to seeing different attitudes to BIM adoption and software in South East Asia. Graphisoft is making a serious commitment to tailoring its solutions to that market and appears to be winning over a number of very large design build firms that are on aggressive, multi-year BIM deployment strategies. 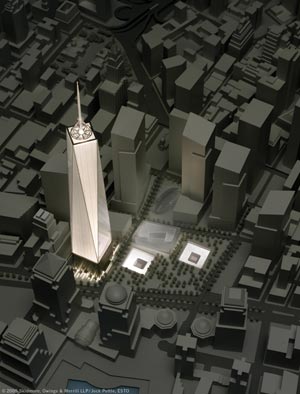 Graphisoft estimates that in Japan it has four out of five of the leading AEC firms. Last year, Graphisoft has signed company-wide deals with Kajima Corporation, which is one of the world’s largest construction companies, as well as Nikken Sekkei, a large design, engineering and management consultancy. In addition, Graphisoft also completed ‘Smart BIM Cloud’ research projects with Obayashi, a leading construction contractor and NEC Corporation, the IT and network integrator.

The launch of BIMcloud in Japan therefore made sense – that is where it was rigorously trialled and adopted.

Much of this BIM deployment has occurred in the last three years or less with many firms taking a measured and pragmatic approach to adoption. While most of the users I talked to are AutoCAD customers, Graphisoft is tailoring its BIM system to the Japanese way of working.

The company has committed to integrate capabilities, workflows and families of parts. It is also a major proponent of open standards with OpenBIM, which Japanese clients are keen to adopt.

Graphisoft chief executive officer Viktor Varkonyi explained that the Japanese approach to business is based on trust in delivering on what has been agreed and customer service.

It is clear that the focus on the Japanese market is a significant commitment for Graphisoft, with long-term strategic benefits for the company and ArchiCAD adoption.

At the same time, product enhancements developed from its work with Japanese clients will be integrated into future product revisions for all geographies. However, considering how global and especially how dominant these firms are in South East Asia the huge benefits to Graphisoft within the supply chains are obvious.

Building on its previous BIM server technology, BIMcloud extends the ArchiCAD BIM infrastructure via the Internet to hosted ArchiCAD project servers. Authorised users from all over the world can log into the BIMcloud server and access live ArchiCAD-based projects.

The fundamental element reservation system, roles / permission, user logs and audits are the same as Teamwork, as are the granular Kilobyte transactions. This means the bandwidth required for collaborative teams does not need any special network hardware or dedicated fibre lines.

Graphisoft technology has always been fairly simple to deploy in-house, requiring a machine to run as a BIMserver with some configuration. BIM servers would be initiated per project but was limited by hard disk space, and speed limited in its configuration, slowing down with an increasing number of users and / or size of models / model complexity.

Running on a public hosted server, such as Amazon Web Services, BIMcloud dispenses with most of the set-up complications and bottlenecks with all data being hosted in the cloud. It is managed via a new BIMcloud administration tool for creating, merging, editing BIM servers with expanding resources. It also features access to automatic backups and version rollback, should you want a model to go back to a previous state.

BIMcloud can also operate as a private cloud, using an in-house server as the storage destination, adding an additional level of security. It is also possible to work on models offline and synchronise with the server later.

Graphisoft’s BIMx docs format supports the AEC process through its integrated 2D and 3D geometry and project metadata. It is very easy to use with a simple interface and provides navigation tools for desktop machines or mobile devices such as tablets (iOS and Android). 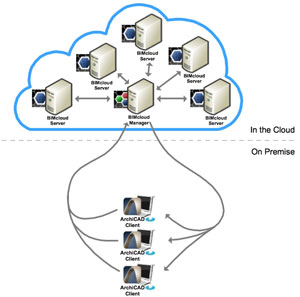 It may not be a coincidence that BIMcloud has arrived at roughly the same time as Graphisoft’s yearly update to its flagship BIM tool ArchiCAD, which of course comes BIMcloud ready. AEC magazine will review ArchiCAD 18 in depth in the next edition but here are a few of the new features to whet your appetites:

ArchiCAD 18 offers a number of ‘bundled’ technologies across its existing brands, a lack of which has been criticised in the past.

It has a built-in Cinema 4D rendering engine. This offers easy one-button “photo-shot” rendering without the need to tweak sliders and parameters, all the way through to full-interface and capability professional user-customised rendering within ArchiCAD.

ArchiCAD 18 features revision management and automatically documents changes to the building model. It tracks the who, why, what and when throughout the entire 3D BIM to 2D documentation workflow.

Comparisons have been made between Graphisoft’s BIMcloud and Autodesk’s Revit and Revit Server product. One point of difference is ArchiCAD’s forward and backwards compatibility, a well-known Revit bugbear.

Revit Server is a complex beast, requires a Windows Server, and lacks audit and permissions.

Some CAD managers I have spoken with resort to using VPNs (Virtual Private Networks) for cross-Internet (and cross network) connectivity. With data being replicated all over, consideration needs to be paid to the network speed / bandwidth between each location.

If the bandwidth is not enough, many managers deploy WAN accelerators, such as a Riverbed device to compress and decompress data on the fly.

In comparison, it is pretty clear that Graphisoft is still well ahead of the competition on deployable workgroup tools.

The launch of BIMcloud coincided with cherry blossom time in Tokyo. Perhaps an apt coincidence, as with all these technological advances and customer velocity that Graphisoft is fostering in the Asian market looks to be quickly bearing fruit.

But good technology alone does not guarantee a win. The Japanese market for any CAD developer has been a tough place to compete, with strong local developers and very demanding customers.

Graphisoft’s mature product is winning over large firms predominantly on its ability to work with customers, tailoring the product to the market.

This is not happening at Graphisoft’s expense. Customers actively assist in funding research and development to help refine their BIM workflows and processes.

Japan’s major construction firms are, step by step, moving in the same direction as the UK construction industry with plans to use their own BIM standards to compete on a global level.

The Japanese ethic on efficiency and compliance should force this through its building industry much quicker than in the UK. I suspect less ‘cajoling’ BIM lunches and drinks events are required for firms to buy in!

Graphisoft has managed to simplify BIM collaborative workflow. BIMcloud takes that to a whole new level while making it even simpler to deploy on a global scale. The Asian market is certainly in Graphisoft’s sights with Japan the first stop on its tour of this part of the world.

As for the UK and North America, success in other countries is a slow burn way of raising national profile but we should be taking greater heed as to what tools competitors are using.

Now, if Graphisoft could just build a BIMcloud for Revit, it would make a killing.

Prior to the launch event, Graphisoft took the press corps on a tour of significant buildings in Tokyo, together with some face time with clients Nikken Sekkei, to discuss its approach to Building Information Modelling (BIM).

Walk down any main street in Tokyo and it is pretty obvious that the Japanese love modern buildings, glass, steel, concrete, seemingly impossible curtain walls with an aesthetic that is pleasing to the eye.

Our first stop was the Iidabashi station commercial buildings by Nikken Sekkei, which was undergoing final fit and finish. A journey to the top of the skyscraper gave amazing views over the incredibly dense city of 13.23 million people, seemingly stretching to infinity. The BIM manager from construction firm Maeda gave us a brief overview of the company’s ongoing drive to migrate to an end-to-end BIM process.

Next up was the Jimbocho Theater, another Nikken Sekkei design, which looked like something out of a Manga cartoon.

Oak Omotesando, is an Obayashi and Tange Associates refurbishment and retrofit retail project. It was completed in ArchiCAD and stands next to the equally stunning reinforced concrete and steel framed TOD’s glass and concrete building by Toyo Ito & Associates. Tod’s is wrapped in a skin of criss-crossed concrete braces and glass that mimics the trees lining the street in Tokyo’s Aoyama district.

Prada’s Herzog & de Meuron store has to be seen to be believed, looking more like latticed jewelry than a building. The six-storey, five-sided, building has signature diamond-shaped glass panes, which vary between flat, concave and convex ‘bubbles’, which result in smooth curves throughout its interior.

Businesses in Japan clearly have an appetite for experimentation and modern design. It is no wonder that the benefits of using BIM modelling and analysis is seen as such a priority to all its major AEC firms.