Shape was demonstrated briefly at the annual Bricsys Conference for developers, resellers, and the press on 25 October in Paris. Shape is a reworked subset of BricsCAD, the .dwg editor that Bricsys sells globally.

“Shape addresses the need for starting off simple,” says de Keyser. “If you have to be a specialist on the software, that’s wrong. You should be a specialist on the discipline.” Both de Keyser and lead developer Kevin Settlemyre say the user experience is designed to be familiar and comfortable to anyone who has trained on AutoCAD. Bricsys is investing heavily on creating a BIM version of its product, which it also showed at the conference. 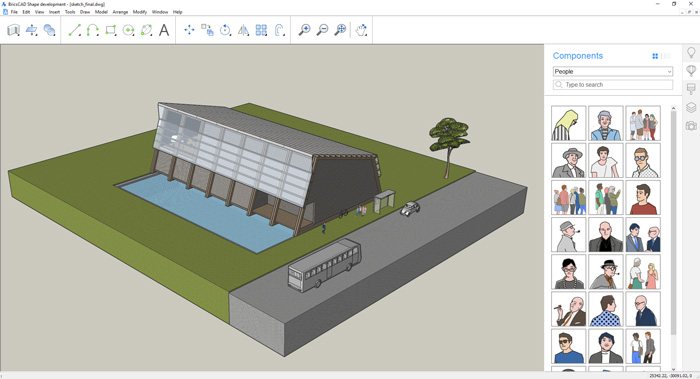 Upon initial view, Shape is reminiscent of Trimble SketchUp, the popular 3D wireframe modeler used in AEC for conceptual design and construction documentation. There is an icon of a person at the 0,0,0 XYZ coordinate base. The initial menu is limited. The key differences are in found in the user interface and the business model. SketchUp uses a GUI (graphical user interface) originally developed to be distinctly different from AutoCAD, while Shape is a subset of BricsCAD, which follows the AutoCAD user experience closely.

Shape shares two unique command entry tools found in BricsCAD. The first is Quad cursor, an information resource that presents commands which vary with the location of the cursor and the current actions of the user. “It is a GUI where nothing is missing but — just as important — there is nothing too much,” says de Keyser. The second is Manipulator, an alternate cursor that appears when moving objects, to set angles for easier location.

Shape is meant to make quick work of creating walls and other shapes typical of architectural conceptual design. Because it is based on BricsCAD, there is no file conversion necessary to use Shape models in BricsCAD, AutoCAD or any other software that imports .dwg files.

The structural elements are intelligent, as with other BIM editors on the market. Walls, doors, windows and other structural elements carry metadata of their definition, materials, etc. If the shape of an object changes, the metadata and any relevant constraints are updated.

De Keyser believes the potential market for Shape is the millions of people who already know how to use AutoCAD but want something light and simple for rudimentary architectural design. It is not meant for mechanical or other drafting disciplines, and there was no mention by Bricsys if versions of Shape for other disciplines may follow this initial AEC-based release.