Ordnance Survey’s Mastermap promised the earth when it was launched, but its uptake in the AEC sector has been limited. James Cutler of eMapSite puts forward the case as to why CAD and GIS users should choose MasterMap as their mapping base. 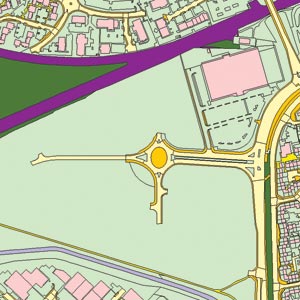 The structure of OS MasterMap allows the user to easily separate out features as illustrated above. (Images copyright eMapSite and Suppliers 2004).

In the years since the launch of OS MasterMap there has been only limited change either in the use of large scale mapping within the historically CAD-centric AEC sector or in the adoption of a digital map base that might enable the scope of use to be extended. This scenario is not without its exceptions, most notably the ever-wider adoption of GIS and of GIS-enabling mapping within the sector and the increasing integration of CAD and GIS.

OS MasterMap itself is an over-arching term that encompasses topographic, address, imagery and transport network databases. Much of the early talk was a data story around the format (GML) and the data structure and the use of terms such as definitive and intelligent. This was not an applications story or a business story but rather a technology one and to early adopters in the GI community this was fine but to CAD users it was next to impenetrable.

The AEC sector has been characterised as having a silo type business model in which corporate capabilities exist either within departments (however defined) or as service centres. For most a CAD capability is an established part of the business serving different mostly “hard” engineering disciplines while GIS is the upstart serving other typically “softer” disciplines from a usually very different part of the organisation. Established traditions and mechanisms for the acquisition and use of data can contribute to inertia and a reluctance to or the lack of a framework for the exploration of alternatives be it software, data type or supplier.

The longevity of SuperPlan Data and its source, Land-Line, within the AEC sector alongside the adoption of OS MasterMap by GIS users merely reflects these realities. With the withdrawal of Land-Line drawing closer and likely to be preceded by pricing premiums as the Ordnance Survey pursues a more aggressive large scale data migration strategy, it is timely to consider the advantages that such a migration affords.

GIS and CAD have one major common characteristic: both handle spatial data and their constructs, topology, geometry and attribution. However, with origins in the design and representation of largely 3D orthogonal features in small areas, CAD differs from the at best 2.5D georeferenced world of GIS. Convergence of the two tool sets is in many ways inevitable as real world applications from site identification through plan development, data collection, environmental impacts, virtual realisation and ZVI to site layout, construction planning, landscaping, site remediation and even marketing require both GIS and CAD “views” of the same data. 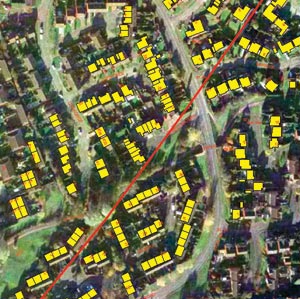 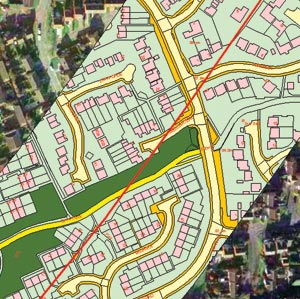 OS MasterMap is the most up to date mapping available for GB and due to the structure of unique features the database is continually being updated. (Images copyright eMapSite and Suppliers 2004).

Businesses demand the same efficiencies from integrated data management as they do from interoperable software. A common data framework drives down the total cost of ownership of spatial data within projects, eliminating duplication in training, in procurement, in management, preparation and maintenance of the data, allowing the same data model to be used as the foundation for all project activities. OS MasterMap provides an interoperable data framework that sits comfortably within this paradigm.

Land-Line is an unstructured “spaghetti” data set supplied in tiles of varying sizes (from 500m x 500m to 5km x 5km). These tiles have limited utility beyond backdrop mapping – indeed by Ordnance Survey’s own estimates more than 80% of all large scale mapping was only being used as a backdrop at the time of the launch of OS MasterMap. Both the inherent structure and the tiled nature of the product makes Land-Line a time consuming prospect when considering the interdisciplinary requirements and capabilities of organizations using both CAD and GIS tools. Users can often be found building polygons, redigitising features and merging individual features (for example, across tile boundaries) in preparation for map output rather than generating useful output directly from the data supplied. This has a significant cost of ownership as well as opportunity cost implications for any business that can be reduced through migration to OS MasterMap.

OS MasterMap is a structured, non-tiled database of some 430 million features suitable for cross-platform usage. OS MasterMap is separated into a number of layers according to feature type (including points, symbols, areas, annotation and polylines). By comparison the DXF format in which Land-Line is delivered does not offer such flexibility or ease of use. 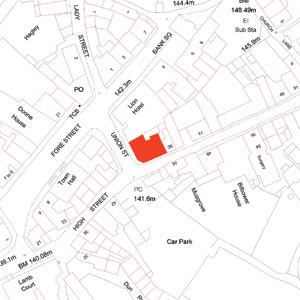 An example of eMapSiteÝs eXMap product as available via MultiMap. (Images copyright eMapSite and Suppliers 2004).

The classification of 430 million features in OS MasterMap into common feature types enables users to apply different schemas/styles/libraries to each feature type and to attributes thereof to create useful and/or compelling outputs. Land-Line Feature Codes offer a far more limited capability in terms of building informative and content rich outputs for different constituencies.

This is especially the case in all those cases and environments where GIS or CAD add a layer of complexity between end user and requirement that is entirely unnecessary. There are already a number of web services that use OS MasterMap to generate colourful and informative map snapshots of small areas using the full richness of the underlying data.

With high levels of capital expenditure across government in recent years this scenario has in some instances resulted in commercial CAD and GIS users playing catch-up in response to client demands. The impacts of this are only beginning to emerge but can be expected to play a significant role in extending awareness of the advantages of OS MasterMap across the sector. Early migration to OS MasterMap has further business drivers owing to the need for long term continuity of data management (Land-Line WILL be withdrawn eventually) and compliance with both client procurement terms and their operational systems.

OS MasterMap itself with its overtures of enormous databases and the associated costs and risks of owning and maintaining these is also likely to extend awareness of the value of web services that are based on OS MasterMap or incorporate the tools that allow OS MasterMap to be accessed and exploited. Light-weight components that use web services protocols are already delivering OS MasterMap accessibility to the desktop of many a CAD and GIS user be it via free web or software application and it is only a matter of time before these initial offerings are extended with other functions and data sets to create a personal interface to OS MasterMap that will make Land-Line a thing of the past and provide users with the flexibility to use the appropriate application for their requirements rather than try to fit all their requirements into one application.

This article was written by James Cutler, CEO at eMapSite, a platinum partner of Ordnance Survey. You can order the latest OS MasterMap and browse the widest selection of mapping and geo-data for GB at www.emapsite.com