One of the primary benefits of 64-bit Windows XP is that it will be able to address more than 2Gb of memory per application. AEC Magazine put this to the test with the beta version of the forthcoming Operating System and two IBM IntelliStations from Matek. 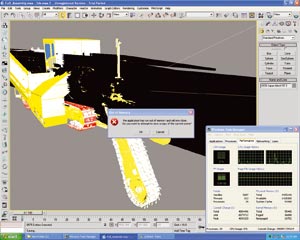 A huge mechanical model in 3ds max 7 running under Windows XP 64-bit Edition takes up 1Gb of resources. The model is arrayed 10 times, and during this process breaks the 2Gb and 3Gb limits and finally crashes just short of 4Gb

While some CAD users are happy to chug away on their trusty old Pentium III, there are many others that continually push the limits of current workstation technology. Hardware upgrades and driver optimisations can provide a much-needed performance boost, but what do you do when you come up against the 2Gb per application memory limit imposed by Windows XP? When this happens, no matter how much physical or virtual memory you have in your workstation, XP will hit a brick wall, and it won’t be happy.

One way to overcome the problem of ever expanding model size and complexity is to enable the /3Gb switch in Windows XP (as documented by Robert Jamieson on page 34 in November/December’s AEC Magazine). The extra Gigabyte should give you 50% more headroom, though this depends on individual application support and can cause problems!

But where next for those who want to create vast terrain models, or model complex structures or entire buildings? 64-bit UNIX is one answer, though there are a distinct lack of UNIX applications in the AEC sector, but 64-bit Windows XP could provide the perfect solution. Currently in beta, and due for its long awaited launch later this year, Windows XP Professional x64 Edition is designed to run on the ‘extended’ architectures of AMD’s Opteron with AMD64 and with EM64T on Intel’s Xeon (codenamed Nocona) and the new 64-bit capable Pentium 4 has just been launched.

In the long term 64-bit Windows will enable CAD users to address an unlimited number of Gigabytes when running 64-bit CAD applications. However, more immediately it could answer the prayers of those users who are already pushing the model size limits imposed by 32-bit Windows XP. Windows XP Professional 64 Bit Edition will enable 32-bit applications to address up to 4Gb memory, doubling the current (standard) limits.

There’s been a lot of interest in this topic from a number of our readers, so we decided to put it to the test with the current beta version of the 64-bit Windows XP, two IBM IntelliStations, supplied by Matek, and a suite of 32-bit CAD applications.

The primary aim of this ‘proof of concept’ article is to illustrate that 64-bit Windows will be able to deal with models up to 4Gb in size. We’re not going to look into stability, performance or speed issues as we feel this would be far too early as the Operating System and drivers are still in the beta stage.

Matek supplied us with two IBM IntelliStations with 4Gb RAM, an Opteron-based A Pro (which features AMD64 technology), and a Xeon-based Z Pro (which features Intel’s EM64T technology). ATI supplied the graphics: a FireGL X3-256 for the AGP-based A Pro and a FireGL V7100 for the PCI Express-based Z Pro. Both machines were loaded with the Service Pack 1 beta version of Windows XP Professional x64 Edition, which is available for free download off Microsoft’s Web site.

Installation was relatively easy, though Windows didn’t manage to install a number of standard drivers in the Z Pro, including Ethernet support. Windows also failed to install graphics drivers for the brand new ATI cards on both machines, but we managed to get hold of a very early 64-bit beta driver from ATI.

The first step was to see if a 32-bit Windows CAD application would run on Windows XP 64-bit Edition. 3ds max 7 installed fine on both machines, and we loaded up a large mechanical model with no problems. Windows task manager showed only 1.0Gb of physical memory, so we arrayed the model several times and watched the physical memory usage rise quickly. Both machines went through the 2Gb and 3Gb barrier with no problem, but stopped just short of 4Gb with a standard error message.

In terms of 3D performance, it was very interesting see that OpenGL support in 3ds max was very slow and only on par with software acceleration. However, when running under DirectX, the performance in 3ds max was quite impressive. We found this quite interesting, particularly as Microsoft has a vestured interest in the success of its own 3D standard.

So there you have it, a short and sweet proof of concept that Windows XP Professional x64 Edition can handle up to 4Gb. But what does this all mean to the CAD market?

Model size and complexity will control to grow, and for those that are currently working on huge projects and running out of memory, the 2Gb limit in Windows XP is seriously hindering productivity.

For now, flicking the /3Gb switch on 32-bit Windows can provide a significant amount of headroom and I’ve seen 3ds max, and a variety of other CAD applications running happily under these conditions, but approach with caution! When it ships later this year, 64-bit Windows will raise the ceiling even more and working with 4Gb on a single 32-bit application should become a reality for most CAD applications, and give many ‘large’ model users a new lease of life.

Looking forward, the question is that with the potential to double model size with existing 32-bit applications, how will the CAD vendors approach the development of their 64-bit Windows-based CAD applications? It’s widely reported that the principal benefit of running 64-bit applications on a 64-bit OS is the ability to address a virtually unlimited amount of memory. And while ‘no-limits’ design is sure to be an attractive proposition to a select few in industry, 4Gb is likely to satisfy the majority of CAD users for some time.

As a result CAD developers may decide to concentrate their development resources on getting their 32-bit code to work better and with more functionality, rather than re-writing their code stream, and as a result it may still be a while before we see an industry-wide move to 64-bit CAD on the Windows platform!