Hundreds of Consulting engineers, contractors, and rebar fabricators throughout the world have been using CADS RC for many years. Greg Corke got an exclusive preview of the latest release, which brings the mature RC detailing product bang up to date.

The new Scheduling Interface makes it much easier to organise, categorise or format your bar data.

CADS RC is the flagship product in the portfolio of Poole-based structural software developer, CADS. The AutoCAD-based detailing software is used worldwide on a diverse range construction projects, including those in North America under the RebarCAD brand.

In addition CADS RC links to CADSÝ Finite Element Analysis and modelling tool Smart Modeller, which enables slabs to be designed and detailed automatically, and results obtained from the companyÝs BS8110 design programs for beams, columns, bases, etc, can also be imported into CADS RC for instant detailing and scheduling.

ItÝs been over five years since the last major update to the product – a long time in software development terms ± but CADS has continuously developed version 8 introducing support for new countries, the latest BS8666 bar bending code and AutoCAD 2007 support. In Q4 of 2006 CADS is set to launch the much anticipated Version 9. Usability is high on the list of improvements for this new release – which marks the first stage of a major system rewrite – but rather than focusing on enhanced methods of drafting, CADS has concentrated its development efforts on making the downstream RC detailing processes much more efficient. This means a major overhaul to the scheduling interface, a more comprehensive issuing and revision system and the streamlining of report generation, among other features. 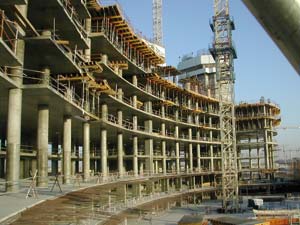 At the heart of the new version is a brand new Scheduling Interface, which runs in an entirely separate window to AutoCAD. As users draft their details inside CADS RC, the Schedule is updated automatically. This makes the program ideally suited to a dual monitor workstation setup where users can easily keep track of both sets of information at the same time.

Programmed in .NET the new Scheduling Interface replaces the previous AutoCAD-based dialogue box of V8, which looked dated and was not particularly intuitive when it came to viewing or organising the contents of the bar bending schedule. Based on modern GUI standards, the new interface takes inspiration from programs such as Microsoft Outlook which makes it much easier to organise, categorise or format your data. At the click of a button, users can easily group data by bar marks, bar length, type or size and ÙFree FormÝ queries are equally simple to carry out. For example, you can find out how much of a particular shape or type of steel is used in an individual drawing.

Much attention has also been paid to the customisation of the Scheduling Interface and CAD managers can easily format which fields are visible, where they appear and how they are displayed. Version 9 also makes it much easier to create reports, which are based on standard templates, but can also be fully customised by the user.

Users can of course still place schedules inside a CADS RC drawing. This has also been enhanced for Version 9 and uses AutoCADÝs new Table command so users have control over spacing, font, size, etc. Any update made to the drawing will be automatically reflected in both schedules.

Finally, it should be noted that unlike brand new software platforms like Autodesk Revit, you canÝt make changes to the schedule in order to update the drawing ± for the time-being the associativity between CADS RC drawing and the Schedule only works one way.

To help cope with increased time pressures on RC detailers to deliver drawings and schedules as soon as they are finished, the new version enables users to issue in stages, whilst managing the process at the same time. This means several drawings and their associated schedules can be detailed in one AutoCAD DWG file. A drawing sheet can either be an AutoCAD layout or a specific area of model and as soon as a sheet is finished it can be issued. CADS RC then locks out the drawing and associated schedule, until such a time that a revision is required. The use of drawing sheets also makes it very easy to copy and paste between viewports with different scales, and the continuity of bar marks is also managed effectively.

If a revision is required at a later stage, CADS RC will automatically put a red ÙRevision ÙAÝ cloudÝ around the bar in question, add a note to the revision section of the drawingÝs title block and update the schedule. Any subsequent revisions will be automatically marked ÙRevision ÙBÝ, ÙCÝÝ etc.

To finish off the process, RC detailers can also export to SteelPac in order to automatically generate code for cutting lengths and bends. Other export formats also include Steelpac, Pinnacle, Ariadis, CSF, PDF, Excel, etc.

The introduction of CADS RC 9 marks the first stage in what will be a complete overhaul of the popular RC detailing solution concluded with release 10. The major concentration in this release is on the management of the RC detailing process with critical updates to the scheduling interface and a streamlined issuing and revision system. Together, these enhancements should lead to less manual checking downstream, which is a critical factor in the success of any Computer Aided Design software solution.

While CADS introduced some impressive functionality for dealing with Over Stock lengths in version 8.4, there has been little added to CADS RC in this release in terms of how details are drafted. This is all to look forward to in future updates, which when implemented is sure to add further value to an already impressive RC detailing system.