Strand7 has supported Arup Australia in the design of the ‘Water Cube’, the Beijing Olympics National Swimming Centre. The revolutionary structure plays on the geometry of water bubbles, and will be the largest swimming complex ever built.

The 2008 Beijing Olympics will have the largest and most unusual swimming centre ever built. The structure was inspired by the shape of an array of soap bubbles and is highly repetitive and constructible whilst appearing very random and organic. The Water Cube houses the pools for the Olympic swimming and diving competitions, along with seating and facilities for 17,000 spectators.

BeijingÝs ýWater Cube¯ swimming centre in the foreground with the ýBirds Nest¯ stadium in the background – both structures analysed with Strand7.

As part of the design process, a comprehensive 3D structural model was created and imported directly into Strand7, the Finite Element Analysis (FEA) software system. The Strand7 model comprised 24,000 beam elements with 12,000 nodes. There were 750,000 beam loads in 55 basic load cases, which were considered in 200 load combinations.

The beam loads were derived from wind and snow pressure loads which were applied to the external translucent cladding and in turn transmitted to the structural members. Using the Strand7 patch element it was a simple procedure to automatically convert these pressure loads to the relatively complex distributed beam load definitions. Strand7 offers a tool that automatically defines the load patches over a gridwork of beam elements, similar to a mesh generator. Once the patches were defined, pressure and other loads assigned to the patches were automatically transferred to the underlying beams according to their associated tributary areas.

The most significant aspect of the analysis was the seismic design. For many years Strand7 has been capable of transient dynamic and spectral seismic analyses. The latest Strand7 Release 2.3 has added the capability to take site-specific seismic time histories and simply create equivalent spectral curves. There is also the option to include the equivalent quasi-static seismic analysis as used in Eurocode EC8, AS1170.4 and other codes.

In the case of the Water Cube, a Spectral Response analysis was performed. This used the results from a natural frequency analysis that calculated 4,424 modes to achieve the 90% mass participation required for an accurate spectral response solution. 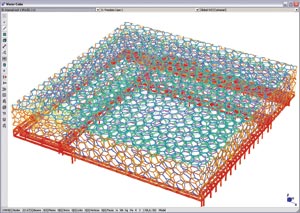 The Strand7 Finite Element model of the Water Cube. 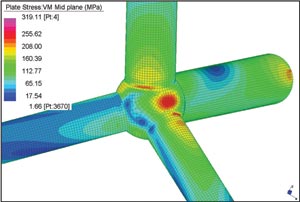 Optimisation of the structural design was required to ensure that the weight of the building could be kept to a minimum without sacrificing strength. Through the use of the Strand7 Application Programming Interface (API) the optimisation process was taken to new levels. Each of the 24,000 beam elements, subject to 200 load combinations, was checked at five points against 13 different equations in the Chinese structural code. Every member and node had the potential to be different and hence considerable optimisation processing was required. Strand7 includes a comprehensive library of material properties and standard beam sections from around the world.

The Strand7 API allows users to interact with Strand7 via an external computer program. This provides the user with the capability to bypass the Strand7 Interactive Environment or to perform specialised functions. The API provides a totally transparent way of interacting with the Strand7 data and repetitive tasks can be easily automated. The API allows new Strand7 model files (binary ST7 files) to be created from scratch, existing Strand7 model files to be modified, the Strand7 solvers to be executed and results to be extracted and processed. These powerful features were utilised in the Water Cube analysis.

Using the Strand7 API, a single iteration of the entire Water Cube design optimization process took only one hour. Arup took advantage of the Strand7 Sparse Solver to facilitate this. This enhanced solver allows very large models to be solved in a much-reduced time compared with other solvers commonly found in structural analysis software. The complete optimisation process took about 25 iterations and led to a phenomenal weight saving, which brought the weight of the Water Cube down to a very light 100kg/m2.

Apart from the global analyses, Strand7 was also used to perform the elastic-plastic analysis of the complex beam connection details within the Water Cube. The accuracy of the results of these nonlinear analyses was confirmed by full scale testing.