Nvidia today gave a glimpse of what design visualisation might look like in the near future, introducing a new ‘cinematic quality’ ray trace rendering technology that can deliver ‘photoreal visualisations of massive 3D models in real time.’

The Nvidia RTX technology uses deep learning to help predict what images will look like and runs on Nvidia Volta GPUs, including the professional-focused Quadro GV100, also announced today.

Real time ray tracing has always been the holy grail of rendering, which is why Nvidia is calling this the biggest advance in computer graphics in 15 years. Ray tracing has historically been slow, taking minutes or hours to render a single frame, so being able to get results in ‘real time’ promises to have a huge impact on worfklows in product development, design and architecture, as well as in movies and games, of course.

Ray tracing simulates the way light behaves in the real world. As the computational demands are huge, it has primarily been done offline, often in render farms.

Nvidia estimates that over 6 billion rendering hours take place every year with current ray tracing technology. “This is primarily all batch rendering based on CPUs, so the market potential for rendering is truly enormous, explains Sandeep Gupte, senior director for Nvidia’s Professional Solutions Group.

“We’re excited to bring this combination of GV100 and RTX technology to really make a dramatic impact on these workflows.”

“This has been always the desire of artists and designers when they are working on their projects, on their scenes,” he says. “If you can see the work you are doing with all the correct lighting and shading and reflections and so on, you can make so many decisions, so much faster.”

Current viewports in CAD and other 3D software rely on rasterisation, a rendering method that takes vector data and turns it into pixels (a raster image). It’s very fast, so it means huge models can be rendered instantly and manipulated smoothly, but in order to increase the realism in the viewport it has to fake real world effects like ambient occlusion.

Ray tracing, on the other hand, delivers physically-accurate results as it precisely simulates light and calculates how thousands of rays bounce off some objects and refract through others, thousands of times.

To suddenly go from a process that has historically taken minutes or hours to one that is ‘real time’ is an incredible leap.

The gaming focused demonstrations shown in the videos below are stunning, but we expect the quality inside the viewport of professional 3D software to sit somewhere between current rasterisers and full ray trace renderers when using accessible workstation hardware.

Older Nvidia GPU architectures, such as ‘Pascal’ and ‘Kepler’, only feature CUDA cores. In contrast, the new Volta-based Quadro GV100 has Tensor cores as well, a new type of core that is optimised for Artificial Intelligence (AI) applications and plays a very important role in Nvidia RTX.

For example, the Nvidia RTX OptiX AI denoiser is designed to dramatically reduce the time it takes to render a high-fidelity image by training a neural network to reconstruct the image using fewer rays.

Nvidia’s RTX software rendering stack sits on top of Volta. It can be accessed through a few different APIs, including Nvidia OptiX (that ray trace technology behind Nvidia Iray and other GPU renderers) and Microsoft DXR (DirectX Ray Tracing), an extension of DirectX 12. In the future it will also support Vulkan, the open API from the Khronos Group, the not for profit organisation that is also responsible for OpenGL.

The technology also paves the way to greater visual quality inside VR applications, presumably with a nod to Nvidia HoloDeck.

But what about the new GPU hardware? The Quadro GV100 looks to be a phenomenally powerful GPU.

It also supports NVLink interconnect technology, which means two Quadro GV100 GPUs can be connected together to essentially make one giant GPU.

This will scale up the performance and double the memory to 64GB, so it can handle very large datasets. We would expect designers would need to use multiple Quadro GV100 GPUs to get the most out of Nvidia RTX. 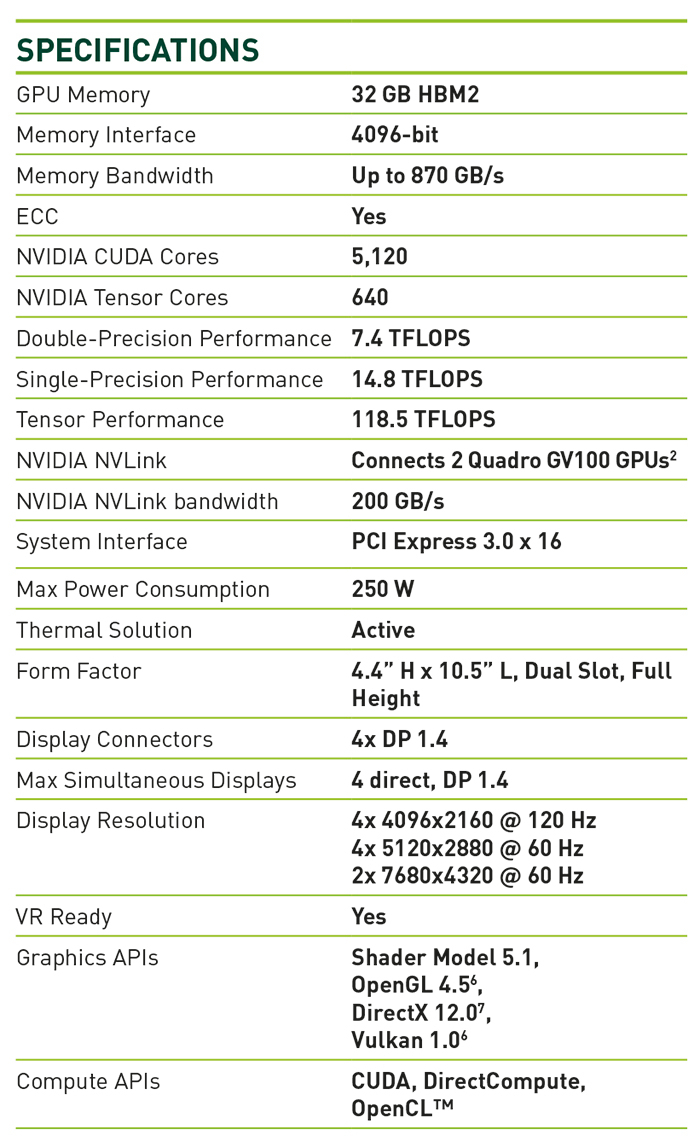 The GV100 is not limited to ray trace rendering. There are a couple of other areas where it is being pitched, including simulation, where it can accelerate CAE solver performance, and in AI development. “The power of Volta on these Tensor cores means all of this gets accelerated dramatically,” says Gupte.

Prices were not disclosed but the GV1000 will almost certainly not be cheap. We predict somewhere in the region of £10,000. However, it’s important to note that this is the first professional GPU based on Volta. The Nvidia Titan V, which sits somewhere between consumer and professional, is also based on Volta.

Nvidia is not the only technology provider to introduce ‘real time’ ray tracing. At DEVELOP3D LIVE last week AMD unveiled a new hybrid viewport technology that is not only designed to deliver higher quality visuals inside CAD and other 3D applications but increase 3D performance in general by using the Vulkan API.

You can read more about it in our in-depth article and see AMD’s DEVELOP3D LIVE presentation below.