In the metallic arms of a pair of assembly robots an evolutionary change in architectural cladding is underway.

At Robofold’s South London headquarters two 6-axis ABB robots are moving in tandem, gliding into their pre-programmed positions, their suction cups attaching to a sheet of pre-cut aluminium.

They arch and twist till the metal is bent and precisely formed into a giant petal, a replica of the one displayed on the screen of the nearby controlling laptop.

This process is capable of creating individual cladding panels — something that until now has been too expensive and time consuming.

With tools that can now liberate the form of each and every individual panel, architects can transform the overall shape of building faades using Robofold’s design and manufacturing technique.

The system works off a plug-in for designs built in Rhino 3D CAD with the software coding developed by Robofold.

The designs are translated into folding simulations in the King Kong software. In turn these results are linked to the Godzilla robot software, to simulate robots folding, before the physical folding begins.

For the construction team, the individual nature of each programmed sheet being formed by robots at the building site means any last minute changes can be quickly and easily rectified.

“If you want variation it becomes really valuable,” Gregory Epps, founder of Robofold said. “You can program that in up-front and say what are the parameters that you want to vary.

“If you want to tweak the design a little bit you don’t even have to reprogram the CAM software and the robot software — if you had to make a new mould then it would be crazy — so this is super efficient.

“You can prototype in production materials and then manufacture using the same equipment, so you know what you’re going to get.”

Metal is best for bending, typically using 1.5mm aluminium, cut with the CNC router in the factory. It can also work laser cut steel or stainless steel up to 1.5mm.

The steel can be finished with paint or dipped in zinc, while aluminium should be anodised; giving a range of options for finishes.

“Normally in architecture we get requests like, ‘can you make it 3mm?’ as they’re used to a flat faade panel,” Mr Epps said. “But once you put the curvature in it and the fold in it you’ve added so much rigidity that you don’t need all that material — you can halve the amount of material that you need.”

Accuracy of the panel is defined in the cutting of the flat sheet, and because the process does not stretch the material like a standard press does, holes can be pre-drilled and trimming is not needed.

Local stretch can be calculated as normal with sheet material around the fold, so the designer knows that it is going to fit to the building’s exterior substructure. 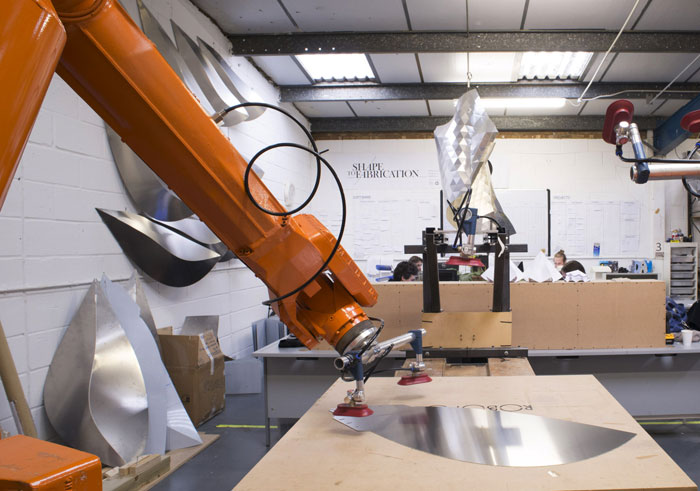 The speed of the process is slower than that of pressing, but offers labour-saving benefits — it is a single stage process, whereas pressing could involve several stages before being drilled and trimmed by a 5-axis laser-cutter.

“You can fold something in paper and go and make it — it’s the ultimate goal.”

Working with desktop paper printers to verify and tweak sheet designs allows mini versions of an architect’s design to be scaled up for production in metal.

The largest piece of work to date created by this method was for Zaha Hadid Architects — the Arum sculpture for the Venice Biennale.

“We helped the Zaha team to develop their own software so that it would generate all of the data we’d need for production.

“They were able to generate valid, folded surfaces, and then out them to us and we would automatically create the production data from it.”

The sheets were cut in the UK and transported to the site in Venice where two robots were ready waiting to fold them.

Seeing the process in action was a big benefit for the Zaha Hadid team, although this did add pressure.

“We still had them on site, changing their mind while we were building it!” Mr Epps explains.

This problem only served to highlight the benefits of the process — new parts were swiftly modelled, cut and flown to the site, where the robots folded the new sheets without any mass reprogramming or delays.

“I think it was quite daring of them to use us, as this was the largest piece we’d done to date. It’s a really cutting edge technology, but it shows that they’re a cutting edge practice to be able to embrace it.”

If the future is to grow more dependent on mobile, localised factories then methods of onsite production like these offered by Robofold are destined to lead the way.

Once more architects and structural engineers realise that panels formed on site are as accurate as the designer’s 3D model, the increased adoption of this method is inevitable.

The next step for Mr Epps and his team is to license the system, supplying two robots, a router, a cutter, a pick-up table, and all the necessary software.

Linking with others in the Robofold licensed network, it will become part of a linked FabLab system where each facility can pick up overspill work from others.

Such a system of robotic manufacturing methods is an exciting method to free up the future of design from mass produced parts, and add further creative flourish to architecture.