AMD is looking to take on Intel in a small, but significant, part of the desktop workstation market. Its first Ryzen CPU (code-named ‘Summit Ridge’ Zen), is set to go head to head with the Intel Core i7-6900K in Q1 2017. 3D CAD users, who also rely on multi-threaded tasks such as ray trace rendering, will be one of the key targets in design, engineering and architecture.

Most CAD workstations feature CPUs with four cores, but AMD’s forthcoming Ryzen ‘Summit Ridge’ CPU will have eight, which will give a significant boost in multi-threaded software. Due to support for ‘Simultaneous Multi-Threading’ (a virtual core technology implemented by Intel as ‘Hyper-Threading’) the new CPU will also feature 16 threads, which will help further cut rendering times.

AMD reckons its first Ryzen ‘Summit Ridge’ CPU will stand shoulder to shoulder with the eight core, 16 thread Intel Core i7-6900K. In a recent demonstration of Luxion Keyshot and Blender, AMD showed there to be very little difference in render times between the two CPUs – the Core-i7 6900K was out of the box (3.2GHz boost to 3.7GHz) while the engineering sample of the Ryzen ‘Summit Bridge’ CPU had its base clock speed set to 3.4GHz (without boost enabled).

When this high-end Ryzen ‘Summit Ridge’ chip comes to market in Q1 2017 AMD says the base clock frequency will be at least 3.4GHz or better. ‘Precision Boost’ will then allow clock speeds to rise on the fly, in increments of 25MHz.

With appropriate cooling, ‘enthusiasts’ will also be able to take advantage of Extended Frequency Range (XFR) technology to take the chip above and beyond the standard Precision Boost limits. AMD gave no indication as to how high clock speeds might go. However, Intel Core i7 6900K workstations are currently being overclocked to 4.0GHz and 4.2GHz.

The cost of the AMD’s 8 core Ryzen chip will be critical to its success in the workstation market. Intel currently charges a premium for its Core i7-6900K ($1,089, compared to $339 for a quad core Intel Core i7-6700K) so there is a big opportunity for AMD to come in with an aggressive price.

On the desktop, Ryzen ‘Summit Ridge’ will be partnered with the new AMD AM4 platform, which will feature DDR4 memory, PCIe Gen 3, USB 3.1 Gen 2, NVMe and SATA Express.

AMD will likely release more Ryzen desktop CPUs in 2017. There will also be a server CPU, ‘Naples’, in Q2 2017 and a notebook chip, ‘Raven Ridge’, in the back half of the year. 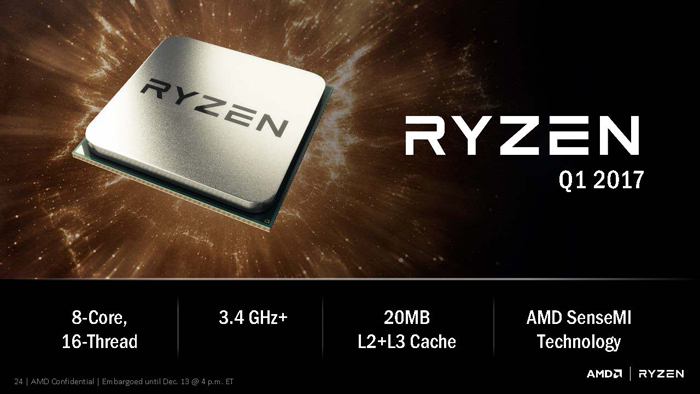