The take up of 3D in architectural practices has been slow to say the least. However, one application appears to have gained broad acceptance within the AEC market – and that is SketchUp. Martyn Day reports.

What is it that makes architects so 2D-centric? ItÝs a question that most of the industryÝs software vendors have spent many years pondering, without really coming up with any concrete solutions. Despite making nearly all CAD programs 3D capable, the industry is solidly 2D. The only 3D product to get widely adopted is SketchUp, formerly @last software and now owned by Internet Behemoth, Google. While it used to sell for around $500, the change of ownership brought a swift reduction in price to $0! However, there is still a ÙprofessionalÝ version which is available for $495, but if you paid for SketchUp Pro in the past the update is free. 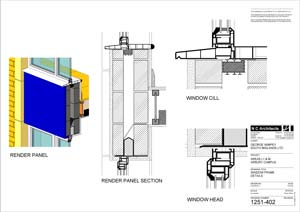 SketchUpÝs success was mainly due to low cost, ease of use and a pent up need for such tools. SketchUp is found everywhere from small one man bands to large global practices and it has inspired even some of the main CAD vendors to try and copy the feature set. However, the downside is that you still need to own and know how to drive the big expensive CAD seat. SketchUp is neat, cool and multiplatform, I can happily run it on my Mac or PC and it feels like the same application.

Fundamentally, SketchUp is about making shapes and extruding them, or punching holes in them and adding groups of geometry together to make faceted models. ItÝs flexible enough to rough out most designs and it goes so far that you could make your model in-context with satellite data bitmaps, sun shadows and topology. If you want to get an idea across, quickly, it can be done in SketchUp. I reckon 30 minutes of tutorials and you will be ready to have a crack at modelling your first project.

Ease of use must have been one of the key reasons why Google purchased the company and with GoogleÝs methodology of giving away applications, SketchUp followed suit. ItÝs now linked into Google Earth and the 3D Warehouse, a project where SketchUp is allowing anyone to build a ÙWikiÝ 3D world of buildings in Google Earth. While this is fun for kids and hobbyists it also benefits the serious architect as when you are talking Google Earth, it really is as in-context as you are virtually going to get.

So with the launch of SketchUp 6, hereÝs a run-down of key new features that are available in the basic free version: Photo Match – provides a way to set up a camera view so that the modelling environment matches up with a photograph. It can be used to match an existing model with a background photo or one can start from scratch with a photo and then trace over it in 3D.

Watermarks – images placed in the background or foreground of the drawing area and span the entire area just as sky and ground. Watermarks could be used to simulate paper textures beneath a model or can be used to place logos and other graphics directly on the screen.

Sketchy Edges – an additional render capability to make the edges look as if they were drawn by hand. Fog – you can now add atmospheric haze to a model with the new fog display.

Speed – SketchUp is now faster, up to 5x faster depending on models and hardware.

Two-Point Perspective – in SketchUp itÝs easy to recreate this classic style used by draftsmen and illustrators to create 3D renderings of buildings.

The Professional SketchUp offers only one major new capability, called LayOut, which is a new suite of simple tools to place, arrange, title and annotate SketchUp models, photographs and other drawing elements to assemble presentation and documentation graphics for both print and screen. This is ideal for presentations or creating technical pubs. SketchUp really needed this utility as you always had to take SketchUp views to other packages to create presentation-quality graphics. Now SketchUp extends beyond just geometry and means you can present and reuse the geometry you have already created. You also need SketchUp Pro if you want to: Export 3D models or 2D vector images, or email support.

SketchUp development continues to be on target despite moving from a program that needed to sell copies to survive to being an almost free give away. The LayOut feature is well worth paying for if you want to extend your usage of the product but the free version will suffice for most of your modelling needs, just how good does it get? ThereÝs little excuse for Architects to not have this tool in-house and on every architectÝs machine. Once you play with SketchUp itÝs damn addictive and you will soon be using it for everything from home furniture layouts to designing skyscrapers.