Computational design is a niche area and its rise may have passed many in the industry by. It is popular among signature architects, academics and students and essentially drives the creation of complex parametric geometry from crafted scripts, programs, definitions and parametric constrained relationships. So, for instance, if town planners think your complex helical skyscraper with diagrid glazing is 10 metres too tall, you can alter the size in the model and the whole building and diagrid curtain wall regenerates. In the right hands, computational tools take the pain out of modelling complex forms and can be used to create and evaluate new designs, while saving costs on fabrication.

Then McNeel & Associates introduced Grasshopper for its Rhino modelling tool and everything became a lot more visual. While scripting in Python or higher languages is still a useful tool for the dedicated computational design fan, Grasshopper introduced a very simple, plug, play and wiring interface, which built the script in the background. Programs are created by dragging components onto a canvas. As a result Grasshopper and Rhino is a popular combination at the likes of Zaha Hadid, Buro Happold, HOK Sport and Foster + Partners.

ArchiCAD is a popular BIM tool developed in Hungary by Graphisoft, which is part of the Nemetschek group. Graphisoft has been lagging its competitors in computational design, despite ArchiCAD’s powerful built-in GDL parametric development language. It seems for quite a while now, Graphisoft has been working with McNeel to build a link between Grasshopper and ArchiCAD. So those architects who have learnt to use Rhino and Grasshopper can now also run their scripts in ArchiCAD and drive a full Building Information Modelling (BIM) model.

In a single alliance, Graphisoft has gone from nowhere in generative design to being able to run the most popular, free, computational design package on the planet. Currently available as a public beta, the company expects to support the connection in January 2016.

The bad news for ArchiCAD users is that while ArchiCAD runs on Windows and Mac OSX, Grasshopper only works on Windows, for now. Grasshopper is written in .NET, which does not port easily to the Apple environment. McNeel says version 2 is more likely to be multi-platform.

There has been support for importing geometry via the Rhino file format in previous versions of ArchiCAD in order to get access to complex geometry created in Rhino — a one way process. The combination of Rhino, Grasshopper and ArchiCAD is a great mix for to the design process. 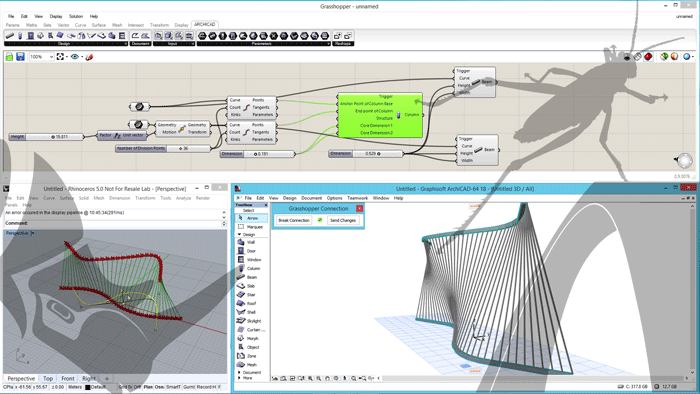 The ArchiCAD website makes available a pair of export and import add-ons that read and write Rhino’s native file format (3dm). Rhino Export Add-on enables users to pass on the geometry of a model produced in ArchiCAD to Rhino efficiently in a user-definable way. The Rhino Import Add-on enables models created in Rhino to appear in ArchiCAD as GDL objects, maintaining the logical definition from the Rhino model.

The new Grasshopper connection provides dynamic links to use the parametric geometry to drive the placement hand configuration of BIM components in ArchiCAD. The system converts Rhino/Grasshopper geometry directly into GDL BIM elements, while maintaining the computational design control within Grasshopper.

Through a live connection, Grasshopper scripts / edits can be previewed in a Rhino window and then applied directly to predefined 2D or 3D ArchiCAD elements. By editing the Grasshopper scripts or values, the BIM model and associated components update in ArchiCAD. It is also possible to send the edits of geometry in ArchiCAD back to Rhino/Grasshopper, which also updates. Should you want to access any of the BIM edit functions in ArchiCAD while using the Grasshopper connection, the geometry needs to be first ‘detached’. The methodology is somewhat transactional but it works well.

This seemingly complex solution overcomes the huge amount of time it would take to develop native support, with Grasshopper directly working within ArchiCAD, but I have been told that deeper integration is more than likely on the cards without the need for Rhino to be present.

As Grasshopper scripts are not stored in the ArchiCAD BIM database, there is a need to manage and maintain the various files created by different applications. Rhino is also a powerful manufacturing-grade modelling tool and can produce geometry that is too complex for AEC, so ArchiCAD breaks this down for BIM elements. 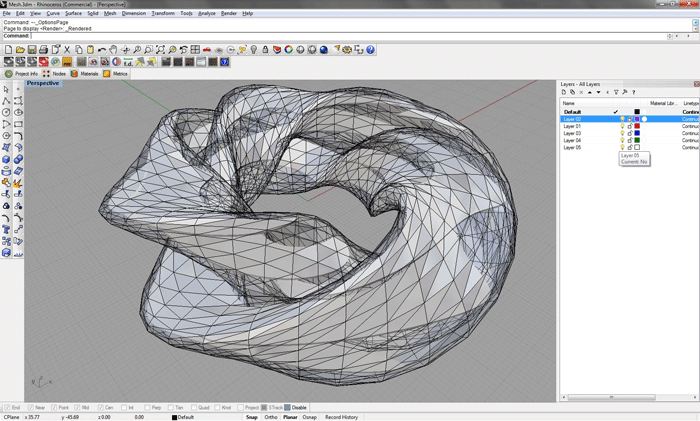 Rhino is a powerful manufacturing-grade modelling tool and can produce geometry that is too complex for AEC, so ArchiCAD breaks this down for BIM elements

AEC magazine has been exploring the world of manufacturer’s BIM components for a few years now and it is amazing to see the leaps and bounds in the quality and the number of BIM components online.

With ArchiCAD being much more popular in mainland Europe than the UK, it is substantially harder for object developers to find good GDL developers to create BIM content. Graphisoft is in the process of developing a handy utility that will help in the creation of simple GDL objects. Simply by drawing the top bottom and side ArchiCAD will create a three-dimensional component based on the actual dimensions. These will not necessarily be parametric parts but could offer a way to batch process to generate 3D parts.

The computational design market is now exploding with opportunities. Despite making all the early headway, Bentley is still playing catch-up with Grasshopper, which has the better user interface. ArchiCAD joining forces with Grasshopper will only further drive the popularity of Rhino and Grasshopper.

With respect to Autodesk Dynamo, which is also capable of running python scripts, Autodesk plans to support this in all its foundation design tools. Given that GC, Dynamo and Grasshopper are all free to customers, computational design is probably the best value for money in any vertical.

ArchiCAD also offers modellers another benefit: compared to Revit, it is exceptionally economic on file size. Given how well ArchiCAD supports IFC files too, I can see licenses of the software being sold just for early stage rapid BIM modelling.

The decision to bypass the GDL skills problem will benefit the commercial BIM object creators, as well as customers. While it is a simple solution it will be beneficial for some customers who wish to rapidly create geometry for families of parts.