If you are into advanced form design in architecture, then you know what Generative Components is all about. Smart Geometry is the industryÝs leading event for advanced applications of computer technology. Martyn Day reports.

One of the Architectural highlights of the year is without doubt SmartGeometry. ItÝs the one event where you can see totally cutting edge technologies applied to Architecture and structural design. Although these are, in the main, research projects, a handful of innovative thought leaders also present how they are using new methodologies to create some of the most radical buildings of our generation.

Conceived by international architects TVS, the Dubai Towers was developed using Generative Components and forms the centrepiece for the vast ÙLagoonsÝ development.

The founding fathers of the Smart Geometry organisation are Lars Hesselgren (KPF), Hugh Whitehead (Foster and Partners), J Parrish (Arup Sport) and Dr.Robert Aish, formerly of Bentley but now, somewhat shockingly, at Autodesk. Each event is a chance for the best students and most talented architects to come together for tuition on BentleyÝs parametric Generative Components technology, which was developed by Dr. Robert Aish and is based on MicroStation. Although this sounds Bentley-centric (and I guess it is), the conference element is highly non-vendor centric, and youÝll see presentations on projects using technologies ranging from McNeelÝs Rhino to 5-axis Robots used to lay bricks!

This was the first GC event to run since the ÙfatherÝ of GC, Dr.Robert Aish, jumped sides and moved to Autodesk at the start of the year. The move shocked Bentley and many wondered what the future of GC would be. Would it continue to be developed? What would Aish do at Autodesk? It appears Bentley took this event to make a very bold statement – that GC was alive and kicking and continuing to grow in usage, despite only leaving a prolonged beta state last year. If anything, AishÝs departure has forced Bentley to change down a gear and ramp up the marketing and awareness of GC in the industry, and the company looks to be more committed. 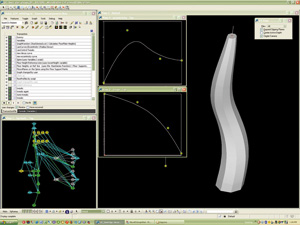 The Dubai towers under development inside MicroStation and Generative Components.

There appear to be no hard feelings between Dr.Aish and Bentley, as Aish was warmly welcomed by the Smart Geometry directors, as well as BentleyÝs Huw Roberts, Global Market Director for building. Aish stayed for the duration, listening intently to all the presentations but could not be drawn into a discussion as to what he would develop at his new masters, Autodesk. It would be foolish to not introduce some conjecture on this particular point, as Autodesk hired him on the basis of what they saw with Generative Components. Parametric form generation is absolutely catching on at leading practices and Autodesk realises that it doesnÝt have anything that can be sold as a solution. Products like Inventor, Maya and 3D Studio Max have been used with lots of hand-penned scripts but thereÝs little for mere mortals to get stuck into. ItÝs a fair assumption that Autodesk wants and needs some Form generation capability, this may be based on Maya or Max, as I have reports of ÙAish sightingsÝ at AutodeskÝs Toronto offices, which is where Alias used to reside. It appears that Aish is getting the scope of what technologies he has at his disposal for product development. For now, Bentley has to get as far ahead as it can with GC, before Autodesk shoves its millions of dollars into the market.

So, enough competitive talk, what was the event like?

The 2008 conference was held in Munich, at the incredible BMW Welt (BMW World) building. Itself an outstanding curvaceous form, the building is a BMW museum, a display area and a community space. Innovation continued into the theatre area where a rising back wall (entrance and exit) came out of the floor ± all very cool and a parametric environment in its own right! The sub title of the event was ÙArchitecture in a Parametric AgeÝ. And before I relay a few of the presentations, I have to say it was far and away the best Smart Geometry conference program I have seen and really depicted the realities of parametric modelling by the leading design firms, many on live or built projects. There was also a healthy dose of theory with the practical, as well as many research presentations leaving you thinking what on earth will happen next in this exciting area. Also of note was the pre-eminence of rapid prototyping models that were on display and the clear focus on post model fabrication, which indicated the traction that was now being forged between modelling and reality.

There were far too many presentations to go through in detail, so I will concentrate on ones that made the biggest impressions. There were presentations from the likes of: MIT, Zaha Hadid, KPF, Gimshaw, Ecotect and Foster and Partners, together with students from the previously held workshops.

The event kicked off with the SmartGeometry directors answering as a panel, some audience generated questions. It was clear that everybody has different ideas about how this technology will be adopted. To the question Ùwill all architects become script writers,Ý Hesselgren (KPF) answered Ùalmost certainly!Ý. Parrish (Arup Sport) felt that artistry would always take over from being a geek and in the future systems would require, hopefully, less scripting. Whitehead felt that the technology has a long way to go before it matures as a platform and that it will attract people from different design disciplines and while the current concentration is on building performance and sustainability, thatÝs a natural progression for the technologyÝs capabilities. Whitehead added that despite thoughts that parametric design in architecture would decrease team size and increase output, itÝs actually increasing the size of design teams due to its complexity and requirements for diverse skills in projects these days. 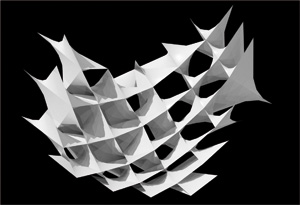 To the question on best practice of deployment of Generative Components, the answers from all the directors seemed to indicate that specialist modelling teams in architectÝs practices now appear to be the most common way to push this kind of technology into a practice. These teams produce their own tools to capture knowledge. But here there is a divide ± the knowledge resides in the architects that are 40 years old plus, where the technology skills are in the kids in (or leaving) universities today.

Asked what still inspires them, Hugh Whitehead answered ÙPoetry in pragmatismÝ. Hesselgren liked to be around people who like what they do, while J. Parrish still got a buzz out of designing a stadium in a computer and having someone build the 1:1 model which he could go and sit in. The team wrapped up with a humorous reflective quote ýThe older we get, the better we were¯.

What can be said about the amazing designs of Zaha Hadid? Probably most would not be possible if it were not for the use of cutting edge technology. The practice is a heavy user of Rhino and a multitude of CAD applications, including Catia. Patrick Schumacher gave a visionary talk on Parametricism as an architectural styleÝ. This takes the concept of using parametric form design from the production of a one off building and applying it to a cityscape. Should the practice be so lucky and influential, which it is, huge swathes of land could be dedicated to an architectÝs brief, allowing computational generative forms to be applied to standard geometry or skeletal systems to produce a cityscape of individual and unique buildings in response to applying formulas derived from any number of sources. Taking a lead from topology of the curvature of a nearby river could be used and applied to an array of buildings, which would morph and form in the computer to automatically respond to the operands that the architect chooses. This is amazing to watch and really takes parametrics to another dimension, although I have major reservations about what it would be like to live in such a generated building. It would certainly be a unique building and would fit in context by formula but I did find myself wondering ýwhy??¯. 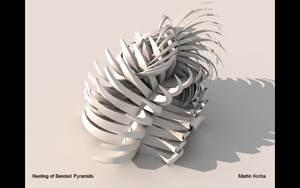 Whitehead has the tool maker role at Fosters but this year went one step ahead and looked at the ÙArchitect as the lawmakerÝ. Using generative tools, together with digital topology, Whitehead was looking at the concept of being able to ÙdropÝ a generative model of a building into a simulated environment, with the correct latitude and longitude, and having the building create the best form for the orientation. And all by taking into consideration the lighting, natural air conditioning, prevailing winds, envelope allowance, and louvres etc. Here the architect would have created the original form and its response to certain conditions, the environment, being the defining factor. ItÝs a fantastic thought and we are probably not that far away from this. The architect would then be the aesthetic judge on the variations that the computations generated.

In an absolutely spellbinding presentation, Jeronimidis took us through the world of fibres as a building material. The spider is a great builder, working in 3D itÝs an architect and fabricator all in one. In todayÝs buildings, joints are always a weak point and give rise to torsion issues and sometimes failures. So what can be done with fibres instead of point, lines, surfaces and solids? When you are fabricating with fibres the material is the structure. Is there anything wrong with knitting the Eiffel Tower? One only has to look at nature to see what can be done with fibres and nature always develops effective solutions. Using nature as an example Jeronimidis thinks that the future will see increased growth of fibrous composite designs that can be designed to intrinsically handle loads better, as the structure can be mapped to stress paths and carried deeper within the materials.

While I am rapidly running out of space to relay much more of the presentations, Bentley has made the event an online event, visit www.smartgeometry2008.com, where streaming sessions will become available.

My final thoughts on the event are that it was truly inspirational and is certainly not to be missed. The one presentation that has been making me think was from a University presentation that was using a 5-axis robot to lay bricks. In itself not exactly a stunning use of a Robot but the team then started playing with the bricklaying, applying transforms to brick walls producing truly complex designs with different sized bricks, generating images, odd alignments and letting the robot just get on with it. The final designs were stunning. The only thing missing was mortar, which was kind of essential and every brick had to be placed by a human hand to the area where the robot could grab it. All these could be easily sorted I am sure with more funding. I think with this event itÝs clear that technology in architecture is dragging the industry from dumb 2D to something that we only expected in science fiction and itÝs almost so close you can touch it.