BentleyÝs Integrated Structural Model is designed to act as a central repository for all of BentleyÝs structural engineering products. Greg Corke takes a closer look at this challenging project.

The Manchester Hilton is currently the tallest post-tension concrete residential building in the United Kingdom. The 170 metre tower comprises 49-storeys and BentleyÝs RAM and STAAD products were used throughout the project.

A few years back Bentley Systems had its sights set squarely on the civil engineering, plant design and architecture sectors – structural engineering never really appeared on its radar. But at the tail end of 2005 this all changed with the acquisitions of RAM International and the STAAD line of software from netGuru. Overnight, Bentley had become a major player in the structural design and analysis software sector, but with some 20 odd products in its portfolio, it also inherited the headache of how to get them all to talk each other and share data efficiently.

With the many facets of BentleyÝs structural software portfolio – from analysis in RAM and STAAD to modelling and documentation in Bentley Structural – the task of sharing and coordinating data is much more complex. You have a lot of independent products which are tailored for different aspects of the structural design process and as such there is potential for a lot of duplication of data. The same design can often be recreated from scratch for design, analysis and documentation and any changes to the design are made manually inside each application 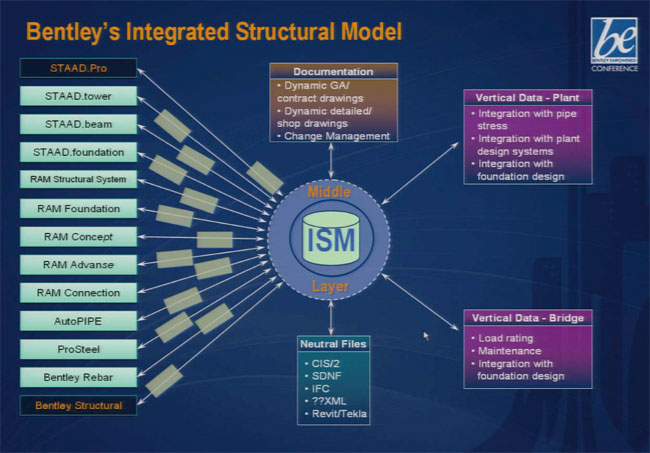 This is BentleyÝs MicroStation-based BIM (Building Information Modelling) solution for structural engineers and designers. Users can model structural systems for buildings, industrial plants and civil structure in steel, concrete, and timber. The BIM model can be used to drive the production of drawings, including plans, sections, elevations, plus BOMS and schedules.

STAAD is a general-purpose structural analysis and design solution for steel, concrete, wood, cold-formed steel and aluminum. It can be applied to virtually any type of structure and comprises a total of five key applications:

STAAD.Pro is a general purpose finite element analysis and design tool which can be used for virtually any structure including stadiums, towers and bridges.

STAAD.foundation enables engineers to analyse and design isolated or combined footings, mat foundations, pile caps, and strip and combined footings. It can be used as a stand-alone program or integrated with STAAD.Pro to obtain the geometry, loads and results from the model.

STAAD.beava (bridge engineering automated vehicle application) is a vehicular load generator which is integrated within the STAAD.Pro environment.

Next year will see the launch of STAAD.X, which will be the last generation of STAAD.Pro. This will be a framework technology on which Bentley will build applications for specific verticals – STAAD.tower, STAAD.offshore, STAAD. plant, and STAAD.bridge – though users will still have access to the general FEM engine for general modelling. The system will feature a completely overhauled user interface and a section property database will be used across all of the applications for consistency.

The RAM Structural System is specifically tailored for the design of both steel and concrete buildings. It automates the time consuming design tasks, such as gravity and lateral load generation. It includes RAM Steel, RAM Concrete, RAM Frame, and RAM Foundation.

RAM CADstudio – provides what Bentley describes as the ýmissing link¯ between the analytical model and construction drawings and is fully integrated with the RAM Structural System.

RAM Concept is a special purpose finite element based analysis and design system for reinforced or post-tensioned slabs or mats.

Bentley Rebar, the MicroStation-based tool for reinforced concrete detailing and scheduling and RM 2006 for the structural analysis of bridges, through the acquisition of Austrian-based TDV.

So how do you take all of the knowledge inside these applications and actually share it?

While Ùdata-centricÝ workflows such as this mean that data can be re-used and the engineer or CAD technician doesnÝt have to recreate it from scratch, it is a manual process which needs to be carefully monitored. Plus, depending, on the quality of the links between the applications, model intelligence, annotations or markups can be lost along the way.

In order to tie these applications together much more efficiently, Bentley is currently laying the foundations for a new Ùdatabase-centricÝ technology, which it calls the Integrated Structural Model or ISM for short.

In essence the ISM acts a Building Information Model (BIM) for structural engineers. Instead of everybody sharing Ùpoint to pointÝ integration data, the ISM is used as a central repository for all structural data, serving up ÙselectÝ data as and when itÝs required by each application.

Unlike a manual import/export workflow whereusers have to make sure they share the right data with the right people at the right time, the ISM can be set up to manage all transactions automatically. It can also manage the state of the transactions and keep a complete revision history including what was changed, who changed the design and when it was changed.

Not all information has to be made available to the ISM, and users are able to hold on to their private data and publish ÙpublicÝ data. For example, while a Bentley Rebar user wouldnÝt be interested in the pipe locations in AutoPipe, he would be interested in the location of the beams and columns, so only they would be made public by AutoPipe and published into the ISM.

In addition to BentleyÝs core ISM structural software products, the ISM is also open to other products and disciplines. For example, The RAM structural system has a bi-directional integration with the Revit modeller so you can take in a Revit or start in RAM Structural System and go back and forth. Users can also work with vertical data ± i.e. for bridges, plant design…

Creating an Integrated Structural model is a huge challenge for Bentley, but it is a logical response to the problem of solving interoperability between its many structural design/anaylsis/documentation solutions. With so many products in its portfolio, Bentley certainly has to take action in order to deliver a cohesive structural engineering solution.

And while amalgamating the 20 or so products into a single software application could be a long term solution, such is the diversity and history of the products on offer – each with different interfaces and workflows – that to introduce a ÙmasterÝ structural system too soon would simply serve to confuse and alienate its customers.

ISM is due for launch next year and is designed to provide Bentley with the ÙglueÝ to bring its products together, share structural project information efficiently and make it much easier to generate design documentation. And most importantly users wonÝt have to keep track of which design changes will affect who – as the ISM will manage all of the transactions automatically. It certainly looks to be a very exciting technology, but Bentley needs to ensure that its products are not only talking the same language, but talking to the right applications at the right time about the right pieces of information. And it needs to be able to do all of this without making the whole system too complex to set up and manage.