Nigel Davies has 20 years’ extensive experience within the AEC industry and is a champion of Building Information Management standards in the UK. He discusses AEC (UK)’s work in this area..

Three-letter abbreviations are becoming more prevalent, with BIM (Building Information Management) and IPD (Integrated Project Delivery) dominant in project talk. Even if people are not completely sure what they mean — if not in terms of definition, at least in practicality — one ‘TLA’ is worth knowing: AEC (UK).

How to add an extra level of detail on top of the 3D BIM Model.

The Architecture, Engineering and Construction (UK) standards committee has been around since just after the turn of the millennium, publishing its well-received Basic Layer Naming Handbook in January 2002. Since then the team has gone on to release documents explaining unified approaches to digital design and production, including the Advanced Layer Naming Handbook, the Model File Naming Convention, Drawing Management Handbook and most recently the AEC (UK) BIM Standard, in November 2009.

The BIM Standard, as the AEC (UK) team, or ‘Collective’ as they prefer to be termed, explain, is a work in progress. It is the first part in an ongoing series of releases to help the vast majority of practices moving into Building Information Modelling/Management produce and share work in a clear and consistent way. The document is the collected effort of a number of like-minded companies which, rather than working in isolation producing internal BIM methodologies which would have limited applicability to the wider industry, decided that the principles of the earlier AEC (UK) CAD handbooks were the most suitable approach.

The original AEC (UK) team had been discussing the need for a practical implementation of BS1192:2007, which does not specifically address BIM. At the same time, the Revit User Group had been intending to put together a series of guidelines and publish a Revit library to enable existing and new Revit users to work using standard templates and families.

As chair of the AEC (UK) I understand that, alongside Paul Woddy who leads the Revit side, for either to be successful they would need to work together to provide a software-independent standard. The AEC (UK) team reformed with additional members from the Revit community, and represents significant effort from a wide range of practices and professions, including Atkins Global, Nightingale Associates, Hampshire County Council, HOK, Buro Happold, Ramboll UK, Mott MacDonald, BDP as well as consultants Digital Construction Ltd, Evolve Consultancy, Excitech and Revit Factory. 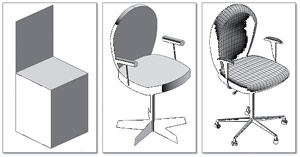 It should not be confused with, nor is it intended to compete with, standards such as BS1192:2007 or other BIM briefing documents, which various other committees, including BuildingSmart, are working on. The AEC (UK) BIM Standards can either be read in conjunction with BS1192:2007, to enhance and implement some of its concepts and recommendations, or it can be used as a stand-alone guide. It was put together to help those practices which do not understand the often complex principles and language of BS1192:2007, or do not have the motivation to implement its procedures.

It could be argued that BS1192:2007 is designed for larger projects where a contractor has been appointed to co-ordinate construction data, yet the vast majority of construction projects may never feel they need this level of co-ordinated digital activity. The AEC (UK)’s intention has always been to provide an ‘off the shelf’ solution for any company, large, medium, and equally importantly small projects, regardless of company size.

The AEC (UK) BIM Standard provides a migration path from 2D CAD to 3D working methods and a true BIM environment. The staff at the coalface of these projects write the AEC (UK) conventions for their designer peers facing exactly the same situations. The solutions are workable protocols that can be used at the very outset of a project, during design development and form a unified foundation of digital data structure.

Alongside the recommendations for data exchange, it also covers the practical aspects of Building Information Modelling /Management, which are commonly overlooked: naming of files, what to model where, what scales to consider, and composition of drawings in a 100 percent BIM workflow, or the more common hybrid 2D/3D CAD/BIM scenario. It links back to the AEC (UK) layering conventions to provide an integrated CAD /BIM solution.

To presume that any project will be 100 percent BIM and that layers are redundant, certainly for the next few years, is probably a mistake. Any construction project includes a vast number of collaboration partners and sub-consultants, all of which are undoubtedly at different stages of BIM adoption, if at all, and which certainly have varying availability of technical support, experienced resources and BIM knowledge.

Criticism has been raised that the AEC (UK) committee lacks the backing of a professional body, such as Royal Institute of British Architects or British Standards. The AEC (UK) team sees this as a strength. It lacks the slow response of formally ratified committees, and is thus able to respond much quicker to the immediate needs of those in the industry. Protocols are approved and authorised by a group of professionals working every day with the challenges BIM presents, and are confident that their solutions address a much needed gap in the UK’s documents. 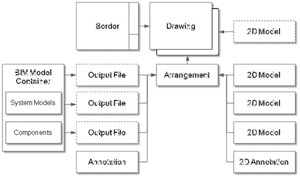 Demonstrating the recommended composition of a drawing in a hybrid CAD/BIM environment.

The team is keen to stress that this BIM standard is merely the first step in a series of releases. It outlines the principles of BIM/CAD data structure, which is soon to be followed by pre-defined libraries of objects and templates for, initially, Revit and Bentley Building products. The intention is to involve the other BIM products — ArchiCAD, Digital Project, Vectorworks, et al, and is keen to recruit experts in these areas who can help develop the libraries.

Only in this way, with standards produced, and ratified, by real users working for real practices on a wide range of projects can the UK hope to adopt BIM methods, and the guidance of BS1192:2007, in a successful and ultimately non-disruptive manner.

The AEC (UK) BIM Standard is a practical, workable standard for any company that has invested in Revit, or Bentley Architecture, or any other BIM software of choice, and has stopped to ask “Now what?”