AMD has managed to pack a powerful mid-range GPU into a low profile graphics card. CAD users no longer have to compromise on 3D performance to get the space saving benefits of a Small Form Factor (SFF) workstation, writes Greg Corke

They say the best things come in small packages, but with workstations, the diminutive desktop has always come with performance trade-offs.

Small Form Factor (SFF) workstations are around 60-70% smaller than a standard mini tower. But the slimline chassis demands a special low profile graphics card with a significantly smaller footprint. With less silicon on board, these custom GPUs have historically been limited in terms of performance.

Entry-level graphics is perfectly fine if you only work with small CAD or BIM models but with larger models or with realistic viewport shading and lighting, frame rates can drop considerably making models jump about on screen.

Despite the limitations the SFF workstation continues to grow in popularity and graphics card manufacturers have sensed an opportunity. Rather than limit sales to entrylevel designers, engineers and architects they are now developing low profile GPUs for more demanding 3D CAD users.

Nvidia kicked things off earlier this year with the launch of the low profile Quadro K1200 (4GB). It was a big step up from the entry-level Quadro K620, as we noted in our review of the Lenovo ThinkStation P300 SFF workstation earlier this year (tinyurl.com/ P300-AEC). However, there still remained a sizeable performance gap between it and mid-range Quadro K2200 (4GB), a popular choice for mainstream 3D CAD tower workstations.

AMD has now upped the ante with the launch of the AMD FirePro W4300, a 4GB low profile GPU that delivers virtually the same graphics horsepower as AMD’s midrange offering, the FirePro W5100. 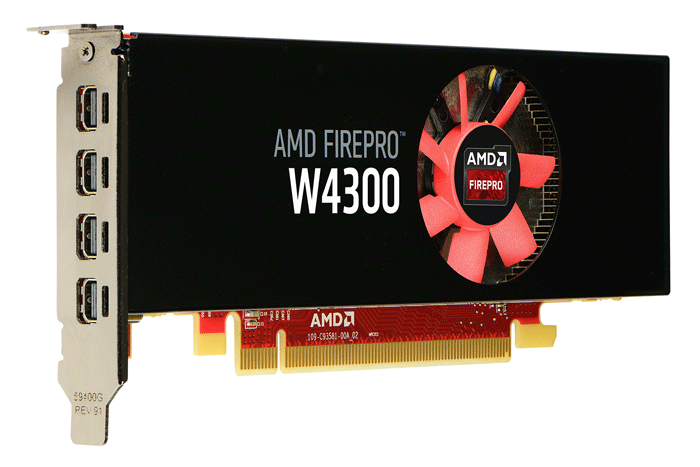 The AMD FirePro W4300 supports up to four DisplayPort displays natively and up to six daisy-chained with DisplayPort multi-stream transport (MST). HDMi, DVI, even VGA displays can also be used with appropriate adapters.

With AMD Eyefinity, the card has the ability to span a CAD model across multiple tiled displays. Doing so with 4K and 5K displays though would likely put a significant strain on the GPU, perhaps best left to higher end cards.

Our test workstation, an HP Z240 Mini Tower, was chosen so we could compare performance with the full height FirePro W5100 and Nvidia Quadro K2200 GPUs.

The SolidWorks 2015 SPECapc benchmark captures a broad range of display states from shaded and edges and shadows to Realview and Ambient Occlusion. The test can be run with Full Scene Anti Aliasing (FSAA) (a rendering mode that smoothes jagged edges) enabled and disabled.

The results were quite astounding.

Under SolidWorks with FSAA disabled the FirePro W4300 was 10% faster on average than the Nvidia Quadro K2200. But with FSAA enabled it was more than twice as fast (we imagine this is the same Quadro K2200 performance issue our suster publication first wrote about in August.

Under PTC Creo, however, the Nvidia Quadro K2200 had the lead, clocking in around 20% faster.

As the card is so new, the major workstation OEMs have yet to announce whether or not they will be supporting it.

We certainly hope they do, as it should bring an exciting new edge to SFF workstations, making them capable of satisfying the 3D requirements of the most demanding Revit, ArchiCAD, Creo and SolidWorks users.