Anyone who writes off green design as niche should think again, in a few short years, the entire construction community will be orientated around sustainability. Pete Baxter of Autodesk outlines why the AEC industry must embrace the change.

When decimalisation was foisted upon the UK in 1971, chaos was predicted and people thought they could never come to terms with a new currency. Within a year, the British people had rallied, absorbed pounds and new pence and were even pleasantly surprised at how much easier it was to add up in base ten.

This may well turn out to be the case when ‘sustainability’ is similarly thrust upon the UK’s design community by forthcoming European Union legislation. One day soon, we will look back and wonder what all the fuss was about, but for now, the pace of regulatory change is making it hard for the construction industry to keep up.

With the goal of 20 percent energy reduction by 2020, the EU’s Energy Performance of Buildings Directive (EPBD) will have a huge impact on the architects and engineers who must design to meet its requirements. The guidelines were modified in 2008 to include efficiency requirements for building renovations — or ‘green makeovers’ — and it has since been suggested that all new buildings from 2019 must produce more energy than they consume. The recent G8 meeting had on its agenda a proposal for a 50 percent reduction in worldwide C02 emissions, 80 percent of which must be from the developed world. The goalposts are moving all the time and governments are struggling to put in place timeframes for implementation.

For the AEC industry — even those who are keen to go green — complying with ever-changing regulations is like trying to pick up mercury with a fork. But however many times the rules are augmented, however long they take to fine-tune, one irrefutable fact remains: change will happen and it will fundamentally alter the way the construction industry operates.

There are some very good things that will come out of this seismic industry shift — apart from saving the planet. Sustainably designed buildings are better buildings to live and work in; often healthier, they are also much cheaper to run and, in time, will become cheaper to build. A recently calculated business case for green design in the US showed that sustainability-certified buildings outperformed their peers in sales, rental and occupancy rates.

The message is getting across to the wider architectural community. In 2002, less than half of architects were incorporating sustainable design into their projects whereas 90 percent expect to do so by 2012. Already, 70 percent are specifying high-efficiency heating, ventilation and air conditioning (HVAC) systems on more than half their projects and almost a third now use energy modelling analysis. The question for many others is, where do they start?

Many architects are aware of the efficiencies made possible by using Building Information Modelling (BIM) to create designs but fewer know about BIM’s remarkable ability to help create sustainable design. An integrated BIM workflow — the cornerstone of architectural design software like Revit — enables the architect to use digital information to design, simulate, visualise and manage projects, all before they are built, and — critically — to monitor their performance, improve their usefulness, and extend their usable life. The consequence for the architects is that they are able to reach more informed decisions much earlier in the design process, helping to deliver projects that are green and lean.

Of course, sustainability is not a tangible concept — you don’t feed in a completed design and then press the ‘green’ button. Rather, sustainability begins when a project is first imagined. Because a green building is one where the consequences of site, aspect, waste, lighting and ventilation — among others — all contribute to the sustainable goal, the building must be considered holistically from the start. This approach helps improve decision-making at the earliest stages. 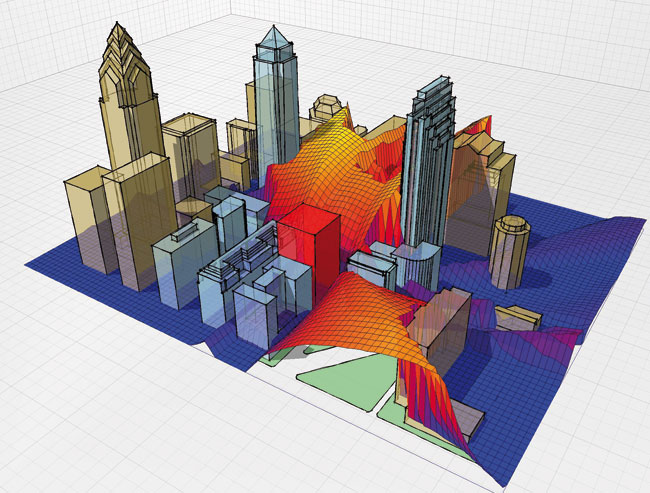 Ecotect analysis of visibility within a dense city-scape.

Because BIM is intuitive, it also helps designers understand how a building fits together — unlike working in a traditional environment, where there is no relationship between anything except in someone’s head. Using a BIM model, designers can quickly produce any number of concepts, arrive at the optimum form for the building and schedule all of the quantities. For example, designers can schedule the percentage of recycled materials to be used or the embodied energy in a project. Or it can be taken a step further and exported out to analysis to measure the building’s operational performance.

Running performance analysis software gives the designer an indication of performance at the concept stage. This might include luminance — daylight levels — that would provide insight into the lighting requirements within a space or the potential for reducing the reliance on powered light.

There will also be implications for heating and cooling the building by changing the materials used. The designer could test incorporating a wall with embedded photovoltaic panels that take advantage of solar energy. They can assess how much solar radiation is falling onto a building and work out how to protect the envelope of that building to prevent too much heat gain. Other tools enable faster, more accurate whole-building analysis of energy, water and carbon emissions that enables users to evaluate the carbon footprint, rather than outsource the job to specialists.

All of this means that designers will start to get feedback very early in the project, allowing them to evolve the best strategies for facades or the best orientation on site — all and any of which will contribute to the building’s eventual sustainability. But this must be done early, to avoid the usual predicament where the architect creates the design and gives it to the mechanical and electrical (M&E) engineer, who then has to make it perform better by throwing expensive systems at it. In a few years’ time, we will all be laughing that we ever did it that way.

All of the major corporations (and most smaller ones) have a sustainability strategy that lays out their environmental goals and how they plan to achieve them. Leading UK brand, Marks and Spencer has mandated that it will be carbon neutral by 2012 and other retailers like Sainsbury’s and Asda, which builds 15 new stores every year, are in similar positions.

While legislation remains in flux, some of the ‘old school’ designers will skip around the sustainability issue and get away with delivering projects the old way. But not for long — the time will soon come when they have no option. By contrast, many forward thinkers in the architectural community are totally focused on sustainability, even using it as a business differentiator and driver — tapping into the issues of bio-diversity and ecology in addition to that of energy saving. I have absolutely no doubt that those in the construction community who will be here for the long term will be those who embrace change rather than have it thrust upon them.

It
Why digital transformation brings AEC and PLM together
Prisoner of Vendor - has AEC software become a trap?
Artificial Intelligence (AI) for concept design
Moving VDI workloads to the cloud
Breaking down the IFC 4.3 schema
Supporting the smart city agenda
HOK: navigating the metaverse for architects
Advertisement
Previous Post
Next Post