By using drones to capture images at critical stages of the construction process, one US firm has gained unprecedented visibility into its projects

John Andres is the third generation of his family to work at Andres Construction, a Dallas-based firm that manages major commercial, institutional, and developer construction projects across Texas.

For many years the company contracted with a helicopter company to capture aerial images of its construction sites. While the images captured from the helicopter were attractive marketing assets, they didn’t deliver valuable construction site information. The airborne photographer didn’t capture the images from the same angle at regular frequencies, which meant that the images didn’t provide full construction site visibility or reliably measure change over time. Plus, they had to be manually organised and processed – a time-consuming exercise that didn’t deliver additional business insights.

John, a drone enthusiast, knew that drones would give Andres Construction much-needed visibility into its construction sites. With high-resolution 360 photos, John and his colleagues could zoom in to precision data captures and gain detailed site awareness. Multi-angle image series would allow them to see the full perimeter view of their sites, monitor progress, and ensure safety and compliance. High precision orthomosaics would give them a birds-eye-view tool to remotely measure distance, area, volumes, and improve site planning. But before John could create a drone program, he had to convince company leadership—his father, uncle, and grandfather—that it was a good idea.

Andres conducted a test project where site images were captured with both a helicopter and a drone. The drone used JobSight, a software tool that uses flight automation to capture images from the same angle, at the same frequency and deliver them to users as three data types: 360 photos, multi-angle image series, and orthomosaic images.

The Andres Construction team found that JobSight offered unprecedented visibility into its construction projects. It gave them up-to-date information on their flight schedules and allowed them to control the timing of their data capture — a major benefit given that construction sites are active throughout the day and project timelines often change. Images could be captured at critical stages during the construction process, including prior to pouring concrete. By capturing pre-pour data, Andres Construction could maintain site visibility and look beneath the surface even after concrete was poured. The software allowed them to monitor progress, check on available materials, and screen for safety concerns from their central office, without having to leave their desks.

Now, Andres Construction works with a Drone Service Provider (DSP) and uses JobSight to capture and process thousands of images across its entire portfolio of construction projects and deliver progress updates to customers.

On a recent build, the Andres team was preparing to drill piers, the load-bearing supports that hold up a building. When John conducted a routine review of the construction site’s JobSight captures, something didn’t look quite right. By using JobSight’s data types to look at the site from multiple angles, John determined that the piers were laid out to be drilled in the wrong place. John and his team overlaid their drawings onto a JobSight orthomosaic image of the site and determined the correct placement for the piers, remedying what could have been a costly and time-consuming mistake. 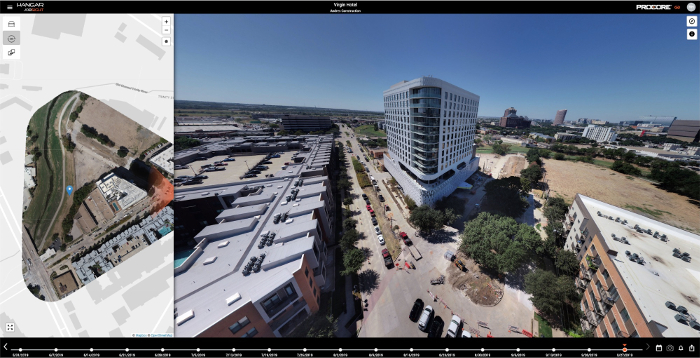 John Andres starts his workday at the JobSight dashboard, where he monitors project progress and ensures that all projects are safe and on schedule. He gets a notification every time JobSight captures new images. Those images are sorted by date in the JobSight viewer, so John can see what happens on the company’s construction sites week to week.

“It’s impossible for us to go to every project site every day when we’re in the main office,” John said. “At the same time, we need to track production rates, ensure that material is on-site, and be able to see the work that got done a week ago, or several months ago. JobSight allows us to do that.”

For Andres Construction, JobSight has been a powerful way to track all their projects, offer their clients a quality assurance value-add, and create a comprehensive system of record.

“Every week we capture the same images from the same angles,” John Andres said. “With JobSight, we can peel back the layers on a building, see that progression, and know that things were done right along the way.”