Generative design and AI are starting to have a huge impact in the AEC industry, improving quality, lowering costs and reducing risk

When Computer Aided Design (CAD) went mainstream in the 1980s, it simply replaced the act of manual drafting; it did not actually ‘aid’ the design of buildings. Now with advances in local computing power, 3D graphics and an acceptance of a 3D modeling paradigm, we are finally at a point where CAD can live up to its name.

Generative Design and Artificial Intelligence (AI) are two key technologies now taking CAD way beyond the capabilities of its 1980s predecessors. Rather than using the computer to document designs, it is the computer itself that is doing the heavy lifting, generating hundreds or thousands of design options, which all meet pre-defined goals. The designer then chooses the ones that best meet the project’s objectives, then refines them to create the best functional solutions. In contrast, with a traditional design workflow, time and cost constraints often lead to playing safe and following what’s been done before. But this means the optimal design may never even be explored.

The benefits to the industry can be huge. Generative design and AI can improve quality, reduce waste and lower costs across the industry. These technologies can also de-risk the design and fabrication of complex buildings, by giving Architecture, Engineering and Construction (AEC) firms much more certainty that project and client demands will be met and delivered on time. 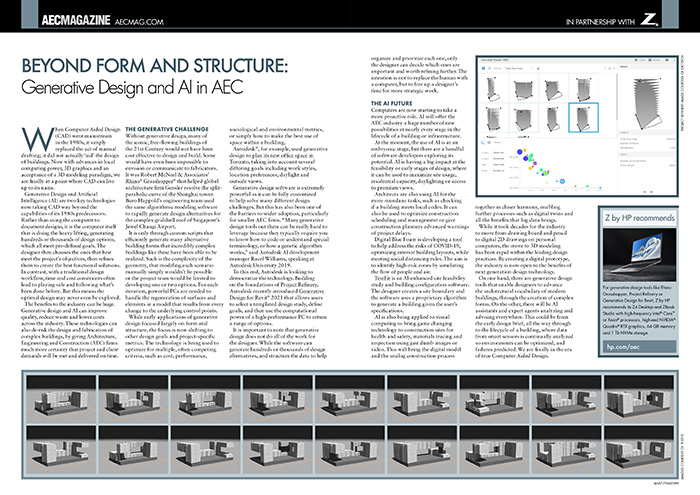 Without generative design, many of the iconic, free-flowing buildings of the 21st Century would not have been cost effective to design and build. Some would have even been impossible to envision or communicate to fabricators. It was Robert McNeel & Associates’ Rhino® Grasshopper® that helped global architecture firm Gensler resolve the split-parabolic curve of the Shanghai tower. Buro Happold’s engineering team used the same algorithmic modeling software to rapidly generate design alternatives for the complex gridshell roof of Singapore’s Jewel Changi Airport.

It is only through custom scripts that efficiently generate many alternative building forms that incredibly complex buildings like these have been able to be realized. Such is the complexity of the geometry, that modeling each scenario manually simply wouldn’t be possible or the project team would be limited to developing one or two options. For each iteration, powerful PCs are needed to handle the regeneration of surfaces and elements in a model that results from every change to the underlying control points.

While early applications of generative design focused largely on form and structure, the focus is now shifting to other design goals and project-specific metrics. The technology is being used to optimize for multiple, often competing criteria, such as cost, performance, sociological and environmental metrics, or simply how to make the best use of space within a building.

Generative design software is extremely powerful as it can be fully customized to help solve many different design challenges. But this has also been one of the barriers to wider adoption, particularly for smaller AEC firms. “Many generative design tools out there can be really hard to leverage because they typically require you to know how to code or understand special terminology, or how a genetic algorithm works,” said Autodesk AI development manager Racel Williams, speaking at Autodesk University 2019.

To this end, Autodesk is looking to democratize the technology. Building on the foundations of Project Refinery, Autodesk recently introduced Generative Design for Revit® 2021 that allows users to select a templated design study, define goals, and then use the computational power of a high-performance PC to return a range of options.

It is important to note that generative design does not do all of the work for the designer. While the software can generate hundreds or thousands of design alternatives, and structure the data to help organize and prioritize each one, only the designer can decide which ones are important and worth refining further. The intention is not to replace the human with a computer, but to free up a designer’s time for more strategic work. 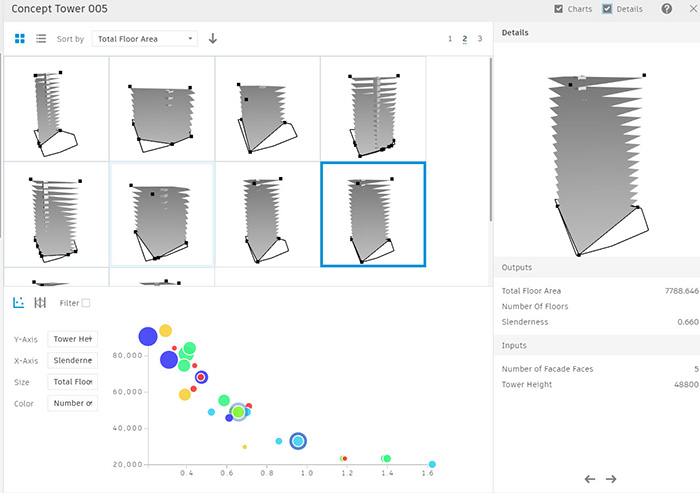 Computers are now starting to take a more proactive role. AI will offer the AEC industry a huge number of new possibilities at nearly every stage in the lifecycle of a building or infrastructure.

At the moment, the use of AI is at an embryonic stage, but there are a handful of software developers exploring its potential. AI is having a big impact at the feasibility or early stages of design, where it can be used to maximize site usage, residential capacity, daylighting or access to premium views.

Architects are also using AI for the more mundane tasks, such as checking if a building meets local codes. It can also be used to optimize construction scheduling and management or give construction planners advanced warnings of project delays.

Digital Blue Foam is developing a tool to help address the risks of COVID-19, optimizing interior building layouts, while meeting social distancing rules. The aim is to identify high-risk zones by simulating the flow of people and air.

TestFit is an AI-enhanced site feasibility study and building configuration software. The designer creates a site boundary and the software uses a proprietary algorithm to generate a building given the user’s specifications.

AI is also being applied to visual computing to bring game changing technology to construction sites for health and safety, materials tracing and inspection using just dumb images or video. This will bring the digital model and the analog construction process together in closer harmony, enabling further processes such as digital twins and all the benefits that big data brings.

While it took decades for the industry to move from drawing board and pencil to digital 2D drawings on personal computers, the move to 3D modeling has been rapid within the leading design practices. By creating a digital prototype, the industry is now open to the benefits of next generation design technology.

On one hand, there are generative design tools that enable designers to advance the architectural vocabulary of modern buildings, through the creation of complex forms. On the other, there will be AI assistants and expert agents analyzing and advising everywhere. This could be from the early design brief, all the way through to the lifecycle of a building, where data from smart sensors is continually analyzed so environments can be optimized, and failures predicted. We are finally in the era of true Computer Aided Design. 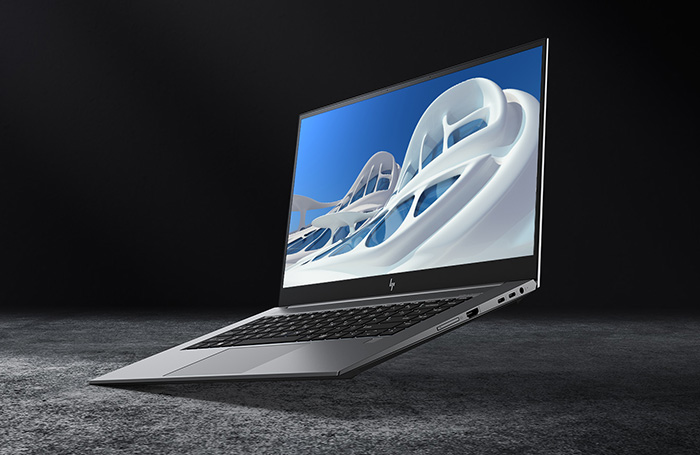