Every architect has their favorite design tools to work with. From fans of Revit to avid users of ARCHICAD, AEC professionals usually have a preferred selection of CAD and BIM software. At the same time, more and more architects are now turning to real-time technology for the interactivity and super-fast rendering it offers.

In order for architects to export the data from CAD tools quickly and efficiently to real-time rendering software, you need a bridge. In Unreal Engine, that bridge is Datasmith.

Datasmith is a suite of tools that converts CAD drawings into the Unreal Engine format. It’s designed to convert scenes from programs including Revit, 3ds Max, SketchUp, SolidWorks, and Rhino.

Choose what to export, and Datasmith performs intelligent conversion, including preservation of instances. When you make changes to your design in your CAD program afterward, simply re-export and click a button in Unreal Engine, and all your changes will propagate into the scene without you having to re-apply materials or other properties.

Some CAD formats also allow for metadata import. For example, for a floor object, you might store its structural material or even physics properties such as its strength or its heat transfer coefficient. Epic Games continually adds new converters and improves existing ones, with its most recent version of Datasmith released less than two months ago.

With CAD and BIM data quickly converted for use in a real-time engine, it becomes easier to create immersive archviz experiences. Twinmotion and Unreal Engine include functionality for virtual reality, lending them to interactive VR for collaborative review.

On a project to design an extension to the Alder Hey Children’s Hospital in Liverpool, AHMM received feedback that hospital employees didn’t fully understand the floor plans, sections, or images they’d been shown. The architects saw an opportunity to use Unreal Engine’s VR capabilities, combined with a HTC Vive Pro headset, to take the employees into the design and have conversations about layout, fit out, and fixings, enabling them to better understand the space.

Many architectural firms such as KA DesignWorks are already putting this functionality to good use. It pairs a HTC VIVE with Twinmotion to leverage the software’s powerful VR capability. KA DesignWorks recently undertook a project to reinvigorate an intriguing building with spectacular views of the Rocky Mountains. 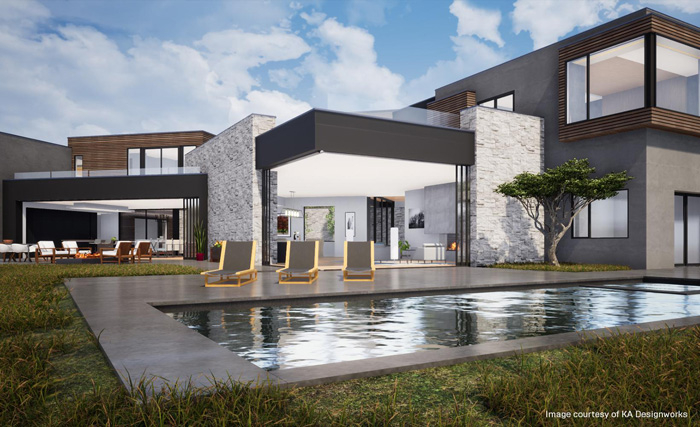 The studio was able to catch opportunities for architectural design improvements with VR walkthroughs that could have gone unnoticed in 2D renders. Rather than going back and forth with clients on certain details, one trip through the project in VR brought up any issues instantly which could be resolved then and there.

Digital twins of buildings and cities

The cities and buildings of the future will be smart. Their design and management will revolve around interactive digital 3D replicas that use real-time sensor data harvested via Internet of Things (IoT) technology.

Because Unreal Engine offers programmable logic, unlike traditional renderers, it can play a key role in the development of digital twins. Data—whether from object metadata or a database—can be fed into the engine and made to drive changes to materials, animation, visibility of objects, and just about anything else you can control parametrically.

As recently reported on The B1M, Beijing-based digital twin specialists 51World used Unreal Engine to create a complete virtual clone of Shanghai—all 3,750 square kilometers of it.

Over 20 landmark structures including the Oriental Pearl and Shanghai Tower were individually modeled for the project, and data from satellites, drones, and sensors was used to generate digital versions of countless other buildings, roads, waterways, and green spaces using an algorithm. Ultimately, the plan is to turn this model into a true digital twin that will be continuously updated in near real time.

Another innovative example of an Unreal Engine-powered digital twin is the 3D-printed miniature of downtown Tampa created by IMERZA. On this project, projection mapping and real-time technology were combined to visualize real-time data, providing a unique way to market real estate and assess urban development. 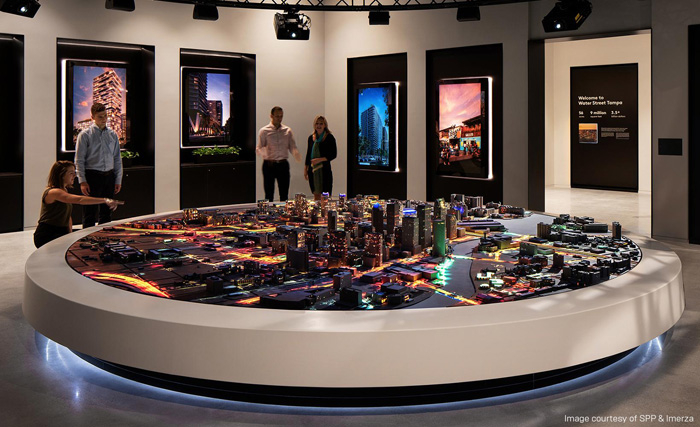 With Datasmith, Epic Games has taken up the cause for better, faster, more accurate CAD and BIM conversion to their real-time file formats.

Today, anyone can use the design tools they love alongside powerful real-time rendering in a seamless workflow. And that means digital twins, immersive VR, and a host of other applications are now at architects fingertips—regardless of which CAD tool they work with.

Bring superfast real-time rendering into your archviz workflow: download Unreal Engine for free and get an unlimited free trial of Twinmotion today.

You can also explore well over 100 hours of free hands-on video courses and guided learning paths with Unreal Online Learning.