3Dconnexion’s 3D mice have been around for many years, but have only just received a dedicated driver for Revit. Paul Woddy of revitguru.com put two of these impressive devices to work inside Revit 2012.

I am proud of the speed that I can get Revit to do what I want. I am not talking about public displays and showing-off in front of customers; but late at night, behind closed doors when I have a model to review or prepare for a customer meeting. I constantly strive for ways to glean an extra few seconds here and there on the more common functionality. I am fanatical about keyboard shortcuts and was very pleased and frustrated in equal measure to see the changes made to keyboard shortcuts in Revit 2011. Fortunately many of the most frustrating aspects of this have been improved in 2012.

But this behaviour offers tiny incremental steps in efficiency, not a major shift, and the question is raised as to whether it is the traditional hardware that is holding users back. Is the trusty keyboard/ mouse combo no longer the fastest way to control design software? Should we be looking to space for the answer?

3DConnexion would certainly like us to consider it — a space mouse anyway. Revit 2012 finally supports space mouse after a long wait and a lot of user-requests, and as soon as I heard this I was on the phone to get myself one.

I started with the SpaceExplorer, which is a very curvaceous model in the middle of the 3DConnexion range, with 15 programmable buttons in addition to the main event — a floating control cap in the middle. It is not intended to replace the conventional mouse but to sit on the opposite side of the keyboard, in my case the right hand stays on the normal mouse and the left hand floats between the keyboard and the space mouse. The objective would be to handle navigation around the model and provide access to frequent tools.

The first impression is that the SpaceExplorer is obviously well made and feels like a quality piece of hardware. Because one of the navigation actions is to pull the control cap upwards, it is a lot heavier than most desktop gadgets to stop it being lifted off the desk. It also glows blue from under the floating cap! The software loaded without a hitch and I was off and running in no time at all. 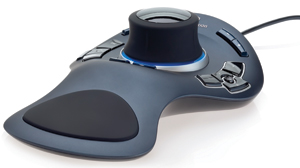 The SpaceExplorer features 15 buttons into which the user can programme Revit shortcuts, though some may find this number of buttons is not enough.
Advertisement
Advertisement

Inside Revit Architecture 2012 I loaded up an existing model and jumped straight in. The control hub can be used to pan and zoom around a 2D view, which obviously isn’t going to set the world on fire because the centre wheel of the mouse can perform that job adequately. The SpaceExplorer does however do this very smoothly and a lot faster than I can get my finger to scroll the wheel, but even so, it is in the 3D view that it shows its true worth.

I tried to use the SpaceExplorer like a joystick and fly towards the model, whereas by default you need to imagine that you are holding the building and spinning it around in your hand. To zoom in, I simply pull the control cap towards me. Having got this concept, it feels very intuitive. In a camera perspective it is far easier than the combination of traditional mouse and navigation wheel.

As for the buttons, I managed to launch the control panel and successfully reassign buttons to do my bidding without lifting the instruction manual. Having a good set of Revit keyboard shortcuts proved essential for this. The short list of Revit tools provided in the SpaceExplorer dialogue can be added to with a very simple but effective macro sequence, but it requires an available Revit keyboard command to do this.

Here I came across my first frustration with the SpaceExplorer. Which 15 tools do I use the most? This is simply not enough to cover the number of shortcuts I use regularly and even with my condensed estimate of the most frequent tools, I soon found my left hand abandoning the SpaceExplorer and heading back to the trusty keyboard.

In an attempt to overcome this I switched to the top-of-the-range SpacePilot Pro, which is an aesthetic work of art incorporating an LCD screen that can display the list of commands assigned to each key or emails. It has the same feel of quality and operates similarly to the SpaceExplorer except that it has 31 shortcut keys.

After several weeks of use, I am now getting used to what each button does (thanks largely to big picture of the space mouse stuck to my wall with the commands written on it). One major frustration is that the buttons are a lot stiffer than a keyboard and I often find that I have not applied enough pressure to launch the desired command. I spent a lot of time customising the button assignments, and then two seconds later switching to the keyboard anyway to type numbers or for an unassigned command. This unfortunately meant that for normal creation and modification of an architectural model, I slowly migrated back to the conventional setup.

So am I ready to hand it back as a beautiful but flawed gimic? Out of my cold, dead hands. What I came to realise is that space mouse is perfect for navigating and reviewing the 3D model. It might sound obvious but it came as a bit of an epiphany for me when I stopped trying to use it for Architectural internal work, but kept it to externals, concept and co-ordination review. In Revit Structure and MEP, those users tend to spend more time creating, editing and looking at elements from the outside or through gaps between other elements and so the fit is more universal.

What I also came to realise from pushing it under the noses of a few users, was that those who do not use a great deal of keyboard shortcuts to drive Revit will see even more benefit from the device than those that do.

In co-ordination meetings I can foresee fights breaking out to be the one to drive, and once you realise that this is where the space mouse is really at home, you overcome the problem of not being able to assign enough keys, because you change the commands to those which are required to review, manipulate, navigate and edit in the 3D environment, rather than the wall, window and door commands which were my first naive assignments.

Overall, a great piece of kit, and I expect to see a lot more of these popping up on client desks over the coming months and years.